How To Spend 48 Hours in Naha 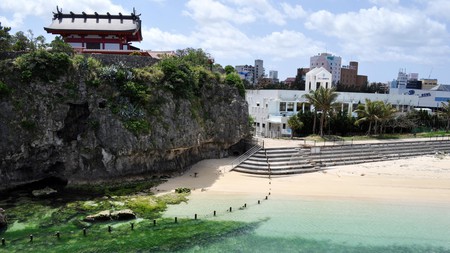 Naha is a vibrant city that seamlessly blends ancient tradition with a vivacious modernity, all while maintaining the laid-back atmosphere of a sunny island paradise. Here’s how to make the most of it in just 48 hours.

When most people think of Japan, Naha isn’t what they have in mind. The capital city of the far-flung subtropical prefecture of Okinawa, it has a heritage and culture very different to the rest of the country. This is partly due to its remote location, and partly due to its unique history as the Ryukyu Kingdom with close links to China.

A visit here enables you to walk in the footsteps of ancient kings in the morning, then chill out on a sun-covered beach in the afternoon; to admire historic artefacts and modern artwork in the same building, and to browse traditional crafts and contemporary souvenirs in the same shopping arcade. Naha is a diverse wonderland that’s everything except monotonous, as demonstrated by the contrast between cuisine that mixes locally grown ingredients with cooking styles from across the world, and nightlife of all different shades that can be found in the city.

And remember, while Naha is the largest city in Okinawa, it’s far from all the prefecture has to offer. To really get the most out of your holiday, combine a visit to the capital with trips to other cities on the main island or further afield to some of Okinawa’s more remote locations.

During the time of the Ryukyu Dynasty, an area known as Shuri served as the kingdom’s capital. This district has now been absorbed into the larger city of Naha, but is still home to a striking remnant of Okinawa’s past: Shuri Castle. Take the monorail or bus from the city centre to its hilltop location, and wander through the grand gates and imposing stone walls to get a feel of the castle’s grandeur. The majestic, red-tiled buildings are distinctively Okinawan, and very different to castles on mainland Japan. Inside you can explore exhibits about the history of the Ryukyu Kingdom, while the expansive grounds are pleasant to stroll around. (Note that much of the castle was burned down in October 2019, and reconstruction is expected to go on until 2026.)

Not far from the castle is another favourite residence of the Ryukyu royal family: the spectacular gardens of Shikina-en. It dates back to the 18th century, and was used as both a retreat and a place to host foreign dignitaries. Follow the 300-metre (984-foot) circular viewing path to walk in the footsteps of these ancient kings, through peaceful forest down to the palace building on the shore of the central pond. Along with the stone bridges, artificial hills and native plant life, all of Shikina-en’s elements combine to create a traditional Japanese landscape garden with a unique Okinawan twist. 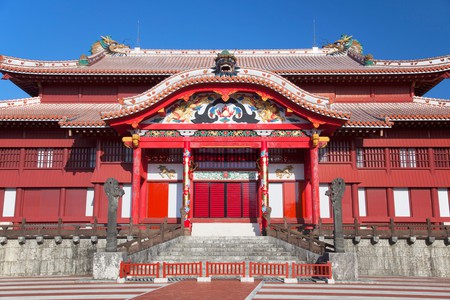 Relax in the afternoon with a visit to Naha’s most important beachside shrine, before exploring the city’s nightlife

On the western coast of the city, just a 15-minute walk from the Asahibashi monorail station, lies the most significant Shinto shrine on the entire island. Naminoue – which translates as “the shrine above the waves” – sits on a craggy outcrop of cliff overlooking the beach and sea beyond. Dedicated to Nirai Kanai, the land of the gods and source of all life in Okinawan mythology, it dates back to approximately the 14th century and is where the kings themselves would pray for peace and prosperity. Stop off at Naminoue Beach afterwards (the only beach in Naha where you can swim) for a spot of sunbathing, snorkelling and general relaxation.

As evening falls, head back to the city centre for dinner at one of Naha’s many restaurants. Okinawa has a unique and distinctive cuisine very different to that of mainland Japan. Local ingredients such as goya (bitter melon) and beni-imo (purple sweet potato) are frequently used, while Okinawan dishes such as taco rice and champuru (stir-fry) can be found on menus across the city. Influence from other countries is also strong though, and there are plenty of Chinese, Indian, Italian and American eateries to choose between. After you’ve dined, it’s time to check out the nightlife. Try a laid-back craft beer bar such as Taste of Okinawa, or a party hot spot such as Bar Spade – there’s a venue to suit everyone in this electrifying city. 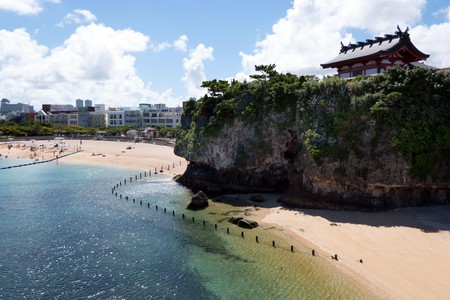 The delightful Tsuboya neighbourhood is the home of yachimun pottery in Naha. This traditional style of ceramics uses clay made from local soil, and colours and designs that reflect Okinawa’s natural landscape. The narrow streets of Tsuboya are lined with galleries and shops showcasing their top-quality wares. Local artisans create both traditionally styled and more contemporary pottery for sale, including functional pieces such as cups and plates, as well as decorative figures. These include the famous shisa (guardian lion-dog) statues that you can see all over Okinawa.

Even if you don’t want to buy anything, the district is still well worth a visit. You can watch the skilled masters at work in their studios, or tour the Tsuboya Pottery Museum to learn more about the history of the craft and the different techniques they use. Alternatively, you can get a little more hands-on by attending a pottery workshop and creating a ceramics piece of your very own for the ultimate personalised souvenir. Afterwards, head to one of Naha’s many delightful cafés to enjoy a spot of lunch – perhaps in some of the very style of pottery you’ve just been admiring. 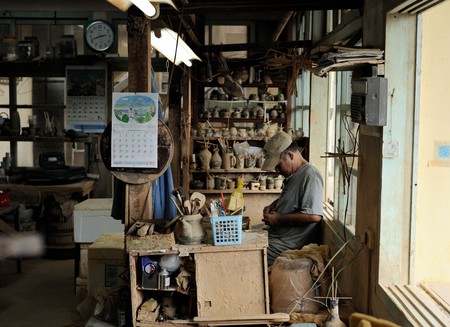 If the sights you’ve seen so far having sparked your interest in Naha’s fascinating culture, drop by the Okinawa Prefectural Museum and Art Museum after lunch to discover more. This duo shares a building in the north of the city, which you enter by crossing a glass floor above a coral reef as if coming ashore an island. There is an impressive variety of permanent and special exhibitions to explore, including local crafts and folklore to archaeology and natural history. The Art Museum, meanwhile, houses a range of modern artwork by artists who all have a connection to the Okinawa islands.

Of course, with weather this good you won’t want to spend all your time inside. Head back south to Kokusai Dori (International Street), Naha’s busy main thoroughfare, to pick up some souvenirs before you leave. Take your time browsing the eccentric gift shops, island fashion boutiques and Ryukyu glass jewellery stores. The latter are filled with fabulous necklaces, bracelets and earrings that match the idyllic colour of the oceans surrounding Okinawa. At the street’s southern end, the Palette Kumoji shopping mall is the place to go for upmarket stores, while the covered shopping arcades that branch off Kokusai Dori hide a wealth of smaller independent market stalls. 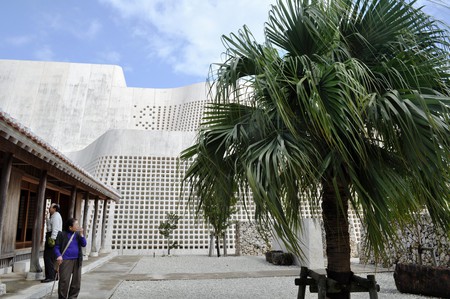