How To Spend 48 Hours in Kobe, Japan 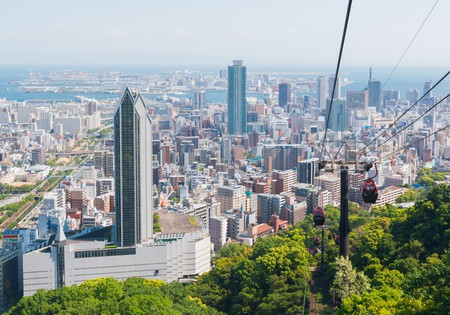 Kobe is a sprawling city, but you can still see the sites on a two-day trip | © Non Chanon / iStock

Kobe is a port city with a lot of appeal. In just 48 hours, you can check out some of its most amazing sites, fabulous food and soothing hot springs.

When tourists think of Kobe, Japan, the first thing that usually comes to mind is the world-famous A5 beef. But, there’s much more to this port city than perfectly cooked strips of steak. Kobe has incredible mountains, mesmerising museums, loads of local delicacies and even a late-night jazz scene. Spending 48 hours in this city is hardly enough to soak everything in, but we’ve figured out a way to make the most of a two-day trip to this fantastic Japanese city. 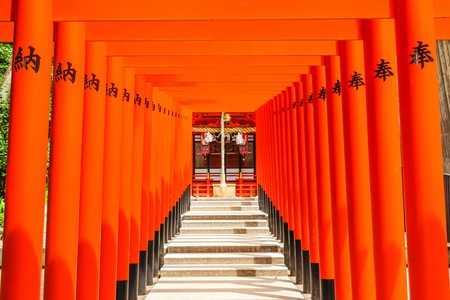 While it might seem odd to start the day at a French auberge-style hotel, the Kobe Kitano Hotel is the perfect spot for morning fuel with a decadent French breakfast at the hotel’s bistro Dining Igrek. After you stuff your face with croissants, you can walk to one of the most famous shrines in the city. The Ikuta Shrine is a Shinto spot that dates to the 3rd century and is a sacred place of worship in addition to playing host to festivals throughout the year.

After paying your Shinto respects, hop over to the Great Hanshin-Awaji Earthquake museum. In 1995, the Great Hanshin earthquake ripped through Kobe damaging countless buildings and killing thousands of people. The museum walks guests through the devastation and how it changed life in the city forever.

Afternoon: Following your nose and stomach through Chinatown

After a morning of history lessons, an afternoon in Chuo Ward can be filled with remarkable sights and tantalizing smells. Embark on your mid-day jaunt to Nankin-machi, otherwise known as Kobe’s Chinatown, where hundreds of stores and dozens of snack shops await. You can’t leave Kobe without tasting butaman, which are out-of-this-world steamed pork buns. The (alleged) originator of the butaman is Roushouki, a steamed-bun purveyor who’s been shelling out the tasty treats since 1915. 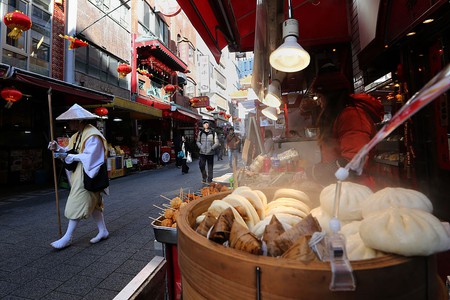 Once your stomach is satiated, it’s only a short walk down to the Kobe Harbour where you’ll find the Kobe Port Tower and Meriken Park. The shiny red, steel tower is one of the main symbols of the city and from the top of the elongated behemoth you can get a 360-degree view of the Rokko Mountains and the Osaka Bay. Meriken Park is next to the tower and is the perfect setting for a late-day stroll along the waterfront. 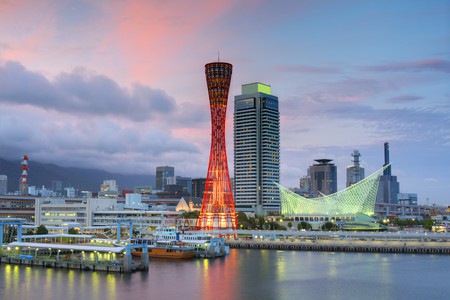 The red, steel Kobe Tower is one of the main symbols of the city | | © Sean Pavone / Getty Images

PRO TIP: Kobe has a very tourist-friendly City Loop bus that can take you around Chuo Ward to most of the major sites. The bus is ¥680 (£5) for an all-day pass and makes stops at Kobe Harborland, Kobe Port Tower, Motomachi Shopping Street and many more sites. It’s a good way to get acquainted with the city all at once.

Evening: Kobe Beef – this is what you came for 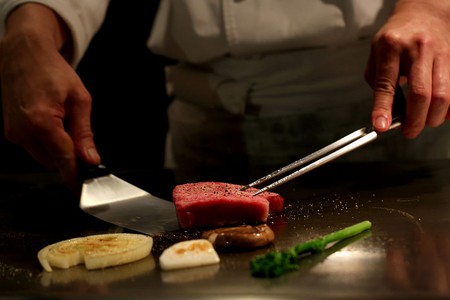 Mouriya Honten started slinging steaks back in 1885, and this three-storey space seats 50 and has set menus of the most delicious A5 Kobe beef in the world. For the uninitiated, Kobe beef is a specific style of Wagyu beef that comes from cows raised in the Hyōgo Prefecture. The beef is famous for its marbled complexion of sinuous fats that simply melt in your mouth. Another excellent Kobe beef spot is Wakkoqu, which is a little further north and features succulent set menus with A5 sirloin cooked on griddles right in front of you.

Into Night: Follow the sounds into Kobe’s jazz scene

With your belly full of beef, you can stay in Chuo and follow the melodious sounds of saxophones into Sone, a 50-year-old live music venue with nightly tunes and a long list of aged whiskeys. Just south of the venue is the Sannomiya area, which is known for its nightlife and shopping. If you’re still craving some late-night snacks, head down to Hyōtan where you’ll find the best gyoza of your life. 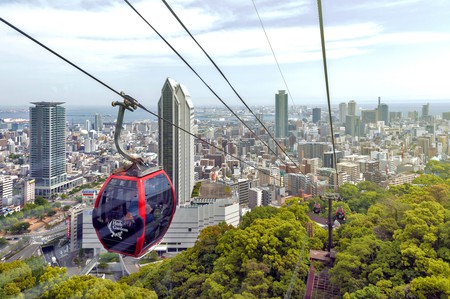 Kobe is a major port city and it’s not small. But if you plan your day properly, you can still see a huge chunk within a finite amount of time. With that said, your day-two adventure should start with the ultimate relaxation. Begin your day early and ride the 12-minute cable car up Mount Rokko with endless views of the entire city. From there, you’ll make your way to the Arima Onsen, which is one of the most famous hot spring towns in all of Japan. As you wend your way around the small stores of Yumotozaka shopping street, you’ll come upon a number of bath houses. The largest public bath house is Kin no Yu, featuring gold water baths and indoor and outdoor pools of varying temperatures. Goshobo, meanwhile, is an old ryokan that dates to the 12th century and is open for guests who aren’t staying overnight. Inside there are soothing stone baths with steaming hot golden spring water. 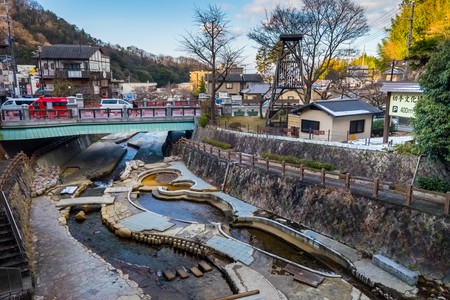 PRO TIP: Kinsen (gold water) gets its brown colour from iron deposits and is supposed to be great for muscle pain and skin issues. 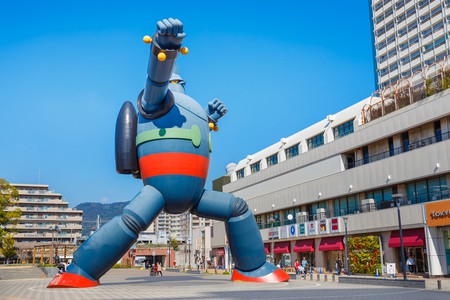 Gigantor Robot was built to commemorate the 15th anniversary of the Great Hanshin earthquake. The statue symbolises Kobe’s revival and acts as a guardian from future disasters | | © iStock / Getty Images Plus

While Kobe beef is the main food draw to this city, one of the best underrated delicacies is sobameshi. Sobameshi is a part fried rice, part fried noodle dish that was founded at a restaurant called Aomori in 1957. Aomori is in the Nagata Ward which also features the Suma Aqualife Park, a fantastic aquarium with over 600 species on display. After you slurped your sobameshi noodles, walk a couple of blocks to the Gigantor, an 18-metre-high (59-foot) statue from a 1960s vintage comic by Kobe manga artist Mitsuteru Yokoyama. The statue was built after the devastating 1995 earthquake to help attract tourists and became a symbol of the rebuilding of the city. 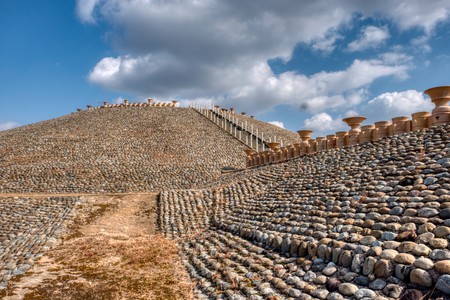 As you travel west through the city, you’ll come upon one of the most unique sites in all of Kobe. The Goshikizuka Kofun is an ancient, sacred pyramid right in the middle of the city and is considered to be the biggest keyhole tomb in the Hyogo Prefecture. Between the 3rd and 7th centuries, these tombs were built for royalty and the Five Coloured Tomb in Kobe is believed to date back 1,600 years. The keyhole tombs get their name from their unique key-shaped mound. 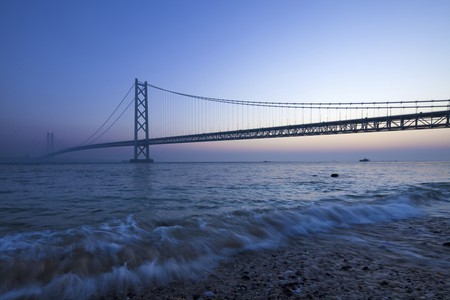 After you’re done digging around ancient burial sites, travel a little further west to one of the biggest symbols of Kobe. The Akashi-Kaikyo Bridge is a suspension bridge that connects Kobe to the Awaji Island. The bridge’s claim to fame is that it has the longest central span of any suspension bridge in the world, extending 1,991 metres (6,532 feet). The bridge is completely walkable if you want to stretch your legs. Or, if you need a breather and a drink, post up at N’Ocean, which features breath-taking views of the bridge and excellent seafood (in case you’re still hungry).

PRO TIP: If you’re staying in Kyoto or Osaka, it’s relatively easy to get to Kobe via high-speed train. From Osaka, it’s only 40 minutes away and from Kyoto it’s a little more than an hour.

Evening: Ending in the heart and soaking in the sights

After a very long day trolling across town, finish things off with dinner at one of Kobe’s finest and most famous restaurants. Kitano Club has been around since 1957 and sits atop a hill overlooking the city. The restaurant is known for its live jazz, high-end sensibilities, and a French tasting menu filled with foie gras, roasted duck and specially selected steaks.

If the views weren’t enough during dinner, hop over to the Shin-Kobe station where you can hitch a ride atop the Shin-Kobe Ropeway. The ropeway travels high above the city and offers views of the Nunobiki Waterfall and Nunobiki Herb Garden. When you get to the top of the line, there’s an observation area where you can truly soak in all of Kobe and reminisce about your perfect 48-hour whirlwind through the city.