How To Spend 48 Hours in Kamakura 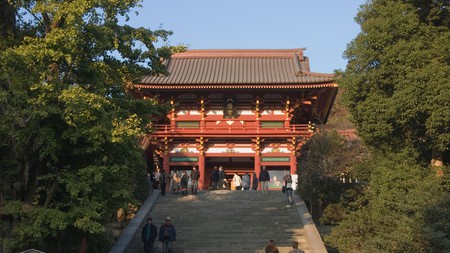 A former feudal capital, a bottomless treasure trove of immaculately preserved religious sites, a breezy seaside locale sandwiched between mountain slopes and Sagami Bay, and less than 60 minutes on the train from Tokyo, Kamakura doesn’t struggle to lure visitors down from the modern Japanese capital.

In fact, according to Owen Skinner from the Backstreet Guides, Kamakura is his most popular day trip from Tokyo.

“It was once the political capital of Japan along with Kyoto, Nara and now Tokyo, so there is a feeling of the importance of Kamakura for Japanese people when they visit,” Skinner explains. “The main reason to visit is to enjoy the local temples and shrines, which are largely untouched by earthquakes, fires and bombing when compared to Tokyo,” he says. “It’s only around one hour by train from either Shibuya, Shinjuku, Shinagawa or Tokyo Station, so it makes a perfect easy day trip.”

Most people only spend a day in Kamakura before speeding back to Tokyo, but investing a night or two in this historic city makes room to do so much more – particularly following samurais’ footsteps to see the endless list of hillside shrines Kamakura is famous for. Read on to learn how to spend 48 hours in Kamakura, Japan.

Start the morning at the Kōtoku-in temple, watching the sunlight flicker off the few remaining fragments of gold leaf around the ears of the Great Buddha, or Daibutsu. The entirety of this 13-metre-tall (43-foot-tall) statue was plated in gold when it was built in 1252, but the Buddha has been outdoors since his shelter was washed away in a tsunami in 1492, exposing Kamakura’s biggest attraction to the elements. Visitors can even climb inside for ¥20 (£0.15) – a unique perspective of Japan’s second biggest bronze Buddha, trailing only the one at Tōdai-ji in Nara.

“Daibutsu is probably the most famous image of Kamakura and definitely worth a visit,” Skinner says. “Check out the Buddha’s 1.8-metre-long (6-foot-long) rice straw sandals!” 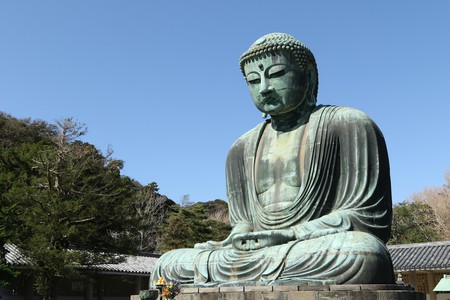 A couple minutes’ walk toward Hase station from the Giant Buddha, the Hase-dera temple adopts a quantity-over-quality approach to its sculptures. This Jodo shrine shows off an 11-headed, nine-metre (30-foot), gilded wooden statue of Kannon, goddess of mercy, complemented by a three-metre-tall (10-foot-tall) Buddha, a cave dedicated to the goddess Benzaiten surrounded by countless tiny Buddhas, and thousands of Jizō statues outside.

“This is one of our favourite temples to show visitors to Kamakura,” Skinner explains. “There are many beautiful and peaceful spots to enjoy classic temple scenes: koi ponds, another giant statue of Buddha – this time in wood – a seasonally changing garden – which is most famous for the June blooming of ajisai (hydrangea) – and a great view over the bay area.”

Borrowing its name from its star attraction, the Daibutsu Hiking Course connects the Great Buddha and Hase-dera with Tōkei-ji, Jōchi-ji and the Zeniarai Benzaiten Shinto shrine, where believers ritually wash their money in the cave’s waters for future wealth. This easy hike takes an hour or two, bookended by the Hase and Kita-Kamakura stations. 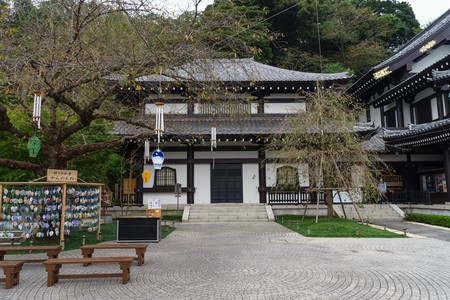 As well as being home to Kamakura’s top two temples, the area west of Kamakura City boasts a lively food and drink scene – particularly the parts hugging the coast. Only blocks from the sand of Yuigahama beach – which links with Zaimokuza farther east to form one long strip of sand that’s routinely packed with day trippers from Tokyo and Yokohama during summer – lies a mixture of Japanese- and Western-style eateries.

“Although Kamakura doesn’t really have its own unique cuisine,” Skinner explains, “locals will tell you to eat locally grown vegetables and locally caught fish and you can’t go wrong.” 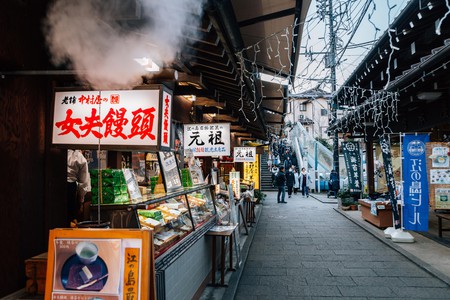 Kamakura doesn’t have its own home-grown cuisine, but there are still plenty of delicious things to eat here | © sanga park / Alamy Stock Photo

Komachi-dori – the shopping street trailing north of Kamakura station – offers a mouthwatering menu for breakfast, lunch and dinner. But one dish every visitor must try is Iwata Coffee’s legendary pancakes: three-inch-thick (7.6-centimetre-thick) fluffy pillows that were reportedly a favourite of John Lennon and Yoko Ono. A box of Toshimaya’s dove-shaped butter cookies is a compulsory souvenir, and a specialty coffee from Brazil-obsessed Café Vivement Dimanche or hipster hub Good Goodies rounds out this breakfast of champions.

“Komachi-dori is a must-do for anyone who enjoys browsing local food and snack stores as well as good-quality Japanese souvenirs,” Skinner says. “Stop at Mameya for nut-and-bean-based snacks and Tsukemono Mikura for local Japanese pickled vegetables.” 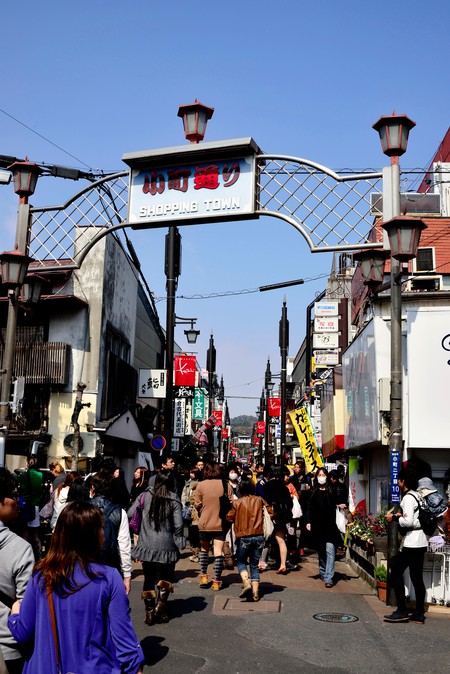 A row of red torii gates leads to Tsurugaoka Hachimangū, the most important Shinto shrine in Kamakura. Cross the bridge over the two ponds representing warring clans to enter this millennium-old complex dedicated to Hachiman, god of war and the samurai. From there, spend the afternoon treading paths left behind by those ancient warriors. The Tenen Hiking Course hugs the ridge of the hills between Kenchō-ji – the oldest Zen monastery in Japan – to the leafy Zuisen-ji via a series of yagura (tomb caves).

“There’s various hiking trails in the Kamakura hills,” Skinner explains. “Many follow trails first used by the samurai and are fairly easy for people of average fitness.”

Don’t skip a detour to the Hokoku-ji temple for afternoon tea. The shrine is shrouded in a bamboo grove that supplies a verdant backdrop for the on-site teahouse.

“Hokoku-ji is about a 10-minute bus or taxi ride from Kamakura Station, but it’s worth it,” Skinner insists. “You can sip traditionally prepared matcha tea overlooking the small forest garden of around 2,000 bamboo trees.” 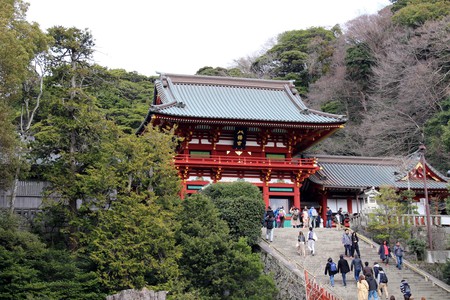 The laneways around Komachi-dori don’t go to sleep after dark. While Kamakura doesn’t have a particularly pronounced regional cuisine, its signature dish is shirasu – tiny anchovies or sardines, usually boiled and partially dried. One block north of Kamakura Station, Akimoto is Skinner’s top spot for shirasu when it’s in season (April to December).

“The most famous dish that people from Tokyo will travel there just to eat is the shirasu,” Skinner says. “The most popular way to try it is simply on rice and usually topped with ginger and spring onions, with various other topping options often available.” 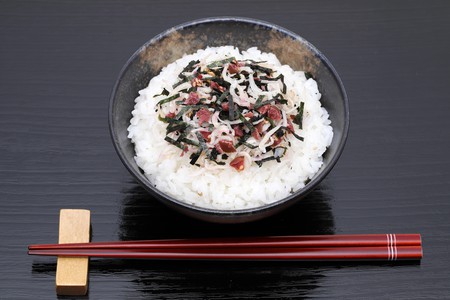 Komachi-dori is also the epicentre of Kamakura’s nightlife. Toast two days in town with a tipple at the city’s most accessible tachinomiya (standing bar) Bar Ram, craft-beer barn Rudy Brew, wine bar Pilgrim So San or eccentric venue Milk Hall, an antique store by day and a cocktail bar by night.