How to Spend 24 Hours in Kochi, Japan 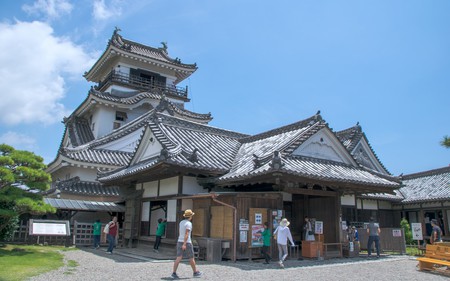 The city of Kochi, Japan, is a small town in the Shikoku region with a big food scene and an even bigger history. Known in ancient times as Tosa Province, Kochi is the birthplace of the legendary samurai Ryoma Sakamoto. The prefectural capital Kochi City is also a gourmet hotspot, though it typically flies off the radar of food-loving travelers compared to cities like Kyoto and Osaka. You’re sure to find that 24 hours in Kochi just isn’t enough, but if you only have one day to spare on your travels, here’s an itinerary from a seasoned Kochi visitor that will help you hit all the most popular local spots.

To start your one-day Tosa adventure, you’ll fly into Kochi Ryoma Airport which has daily domestic flights from Tokyo, Osaka, Nagoya, and Fukuoka. From the airport, catch an airport limousine bus to the city center (about 30 minutes). 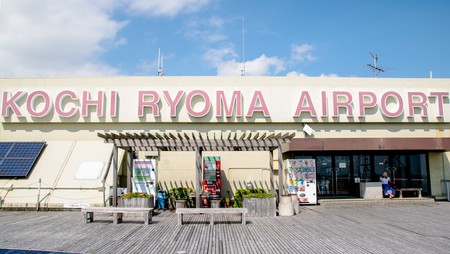 Grab a selfie with a samurai

One thing you can’t miss upon arriving at JR Kochi Station is the monument to three samurai from Tosa who devoted themselves to the task of modernizing Japan in the 1800s: Hanpeita Takechi, Shintaro Nakaoka, and, of course, Ryoma Sakamoto.

It’s worth stopping by the café Cocochi Coffee inside JR Kochi Station for a ‘RYOMA cappuccino’ with samurai latte art. If you missed breakfast, you might also want to grab a pastry from the station bakery to hold you over until lunch time. Leave your luggage in a locker at the station, or head to your accommodations at Kochi Sunrise Hotel early (more on this below), where the front desk will hold your luggage for you until check in.

10AM: Visit Kochi Castle, one of Japan’s 12 original castles

Kochi Castle, like many traditional Japanese castles, is located on a hill. Before making the climb up, stop by the Kochi Castle Museum of History located just outside the castle grounds. Their ‘Kochi Castle Combination Ticket’ covers both the museum and entrance into Kochi Castle itself. The museum has a digital guide for smartphone and tablets, with translations available in five different languages. 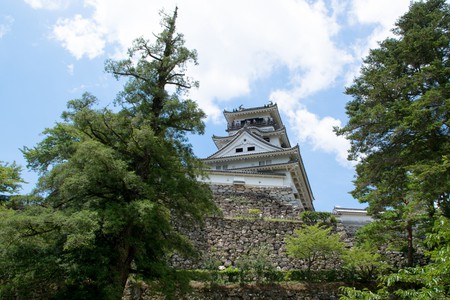 Kochi Castle is one of just twelve of Japan’s original castles that are still standing today. The current castle tower was built during the Edo period in 1749, although it is technically older than that as the original castle was first constructed in 1603 but burned down in a fire in 1727. Since then, the ancient castle has survived natural disasters, a government-ordered dismantling program, and World War II, and is remarkably well-preserved.

One of the charms of Kochi Castle is how little has been changed. All areas of the castle tower are open to the public, and the lacquered balcony at the top offers some great views of the surrounding area.

On your way down from the castle, enjoy a well-deserved treat from one of the old-fashioned ‘ice crin’ vendors you encounter. 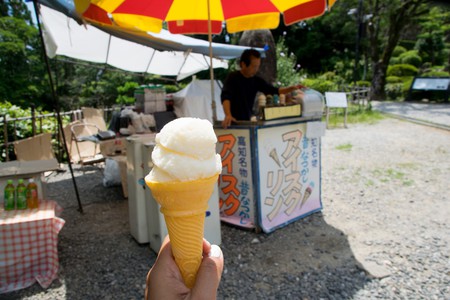 Torishin is the kind of place you’d never find unless you were brought here by a local. One of the most popular lunch spots in Kochi City, Torishin specializes in down-home chicken dishes. Their Chicken Nanban Teishoku lunch set is their most popular item, featuring a fried chicken cutlet topped with tartar sauce and a vinegar dressing.

Kochi Sunrise Hotel is both reasonably priced and centrally located, with the local tram stop Ohashidori located just outside. They also have an excellent Japanese-style breakfast.

Although this Kochi landmark holds the reputation of one of the ‘most disappointing sightseeing spots in Japan’, it’s actually quite charming. An arched wooden bridge that spans a small canal on a quaint shopping street, Hariyama Bridge is known in Japan as the setting of a tale of forbidden love and a traditional folk song. The lyrics of the song translate to:

If you temper your expectations a bit, you’ll probably find the bridge quite delightful! There’s even an old clock tower across the street from Harimaaa Bridge that plays the melody of the original folk song periodically throughout the day. 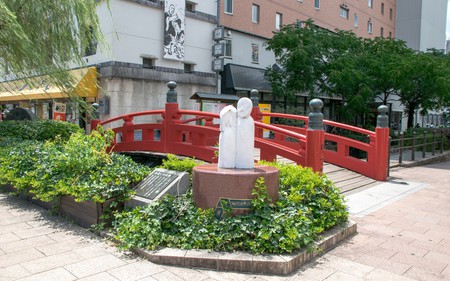 Learn the history of Kochi’s popular local style of dance at the Kochi Yosakoi Information Exchange Center. You can watch footage from past festivals, try out the steps to a classic yosakoi dance, and even take a commemorative photo wearing colorful yosakoi costumes. Admission is free.

よさこい祭りの歴史をパネルで見たり実際に衣装を来てよさこい踊りを踊ったり写真を撮ることが出来ます。有料で鳴子も作れます。 You can see YOSAKOI festival 's history by panels! You can also wear YOSAKOI dance costumes and learn dance and even taking a photo with it. If you pay extra money, you can make your original Naruko there! #yosakoi #festival #naruko #kochi #history #sightseeing #travel #trip #drive #yosakoifestival #よさこい祭り #よさこい #高知 #鳴子 #歴史 #旅行 #ドライブ

6PM: Check out the Obiyamachi area

You can walk from the yosakoi museum to Obiyamachi, Kochi City’s main shopping arcade. Here you’ll find a large variety of shops, including traditional Japanese handicrafts, Kochi snacks and souvenirs, and even an official store with fan merchandise for the city’s most famous yosakoi team, Honiya. 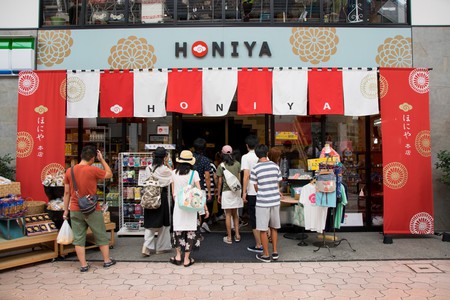 The arcade is fully covered, which provides insulation in the winter and shade from the summer heat. Pop into one of Obiyamachi’s many cafés if you find yourself needing a break or a small snack before dinner. 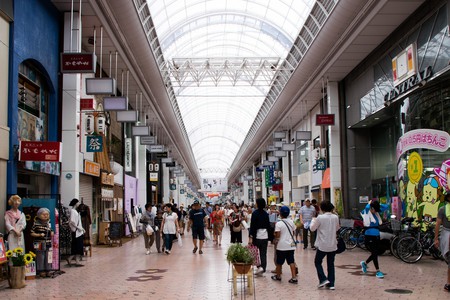 At the other end of Obiyamachi, you’ll come upon Hirome Ichiba, a combination fish market, food court, and beer hall. Grab dinner from one of the many food stands in the marketplace and take a seat anywhere you can find an open spot. If it’s crowded, don’t be afraid to share a table — Kochi locals are extremely friendly, so grab a yuzu beer and get ready to say, Kanpai! (Cheers!) 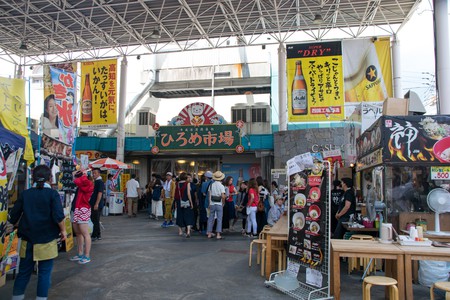 Enjoy a traditional Japanese-style breakfast at your hotel of grilled fish caught from the Tosa sea, Japanese omelet, rice, miso soup, and a variety of side dishes made with local produce and seafood. After breakfast, you can leave your bags with the front desk after check-out and explore a bit more before flying out.

Before you leave: Souvenir shopping at the Tosa Sunday Market

The Tosa Sunday Market first opened in 1690 and is Japan’s oldest open-air market. It has over 500 stalls along a 1 km stretch where you’ll find everything from fresh produce and seafood to world-class knives and hand-carved trinkets. It’s the perfect place to pick up a few souvenirs before you head to the airport and set off for your next destination in Japan. 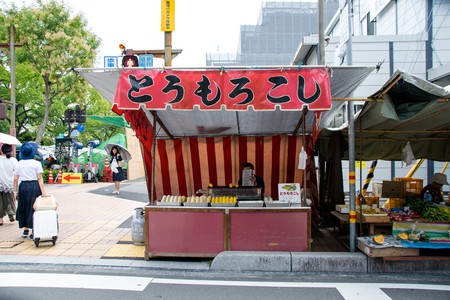 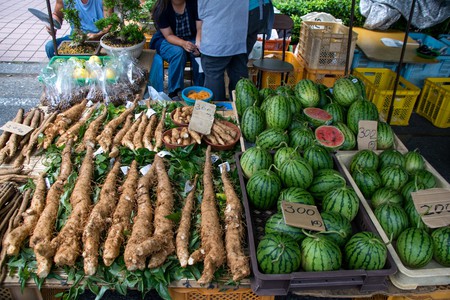 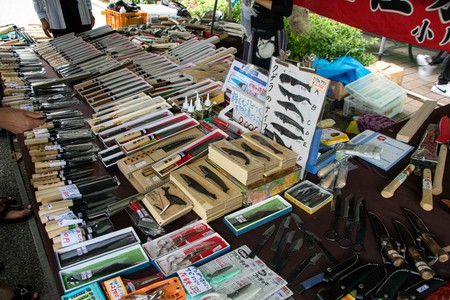