How to Spend 24 Hours in Hiroshima and Miyajima 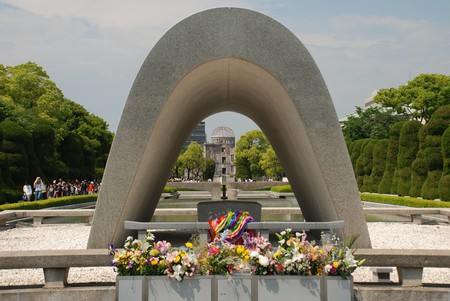 Hiroshima may be much smaller than Tokyo or Osaka, but there’s plenty to see and do here. The prefecture is home to two of Japan’s most famous UNESCO World Heritage sites: the somber A-Bomb Dome of the Hiroshima Peace Memorial and Itsukushima Shrine, the only Shinto shrine in Japan that floats on the sea. If you’ve got only 24 hours to spare for a visit, here’s an itinerary that will make the most of your time in Hiroshima.

You’ll arrive in Hiroshima by way of the shinkansen bullet train. Stash your overnight bags in a locker at the station, as you won’t be checking in to your accommodation until later on in the day.

Start your trip with a visit to the Hiroshima Peace Memorial Museum. With the depth of the museum’s exhibits, which include extensive English translations, you could easily lose yourself for a whole day here — but try your best to keep it to a few hours. 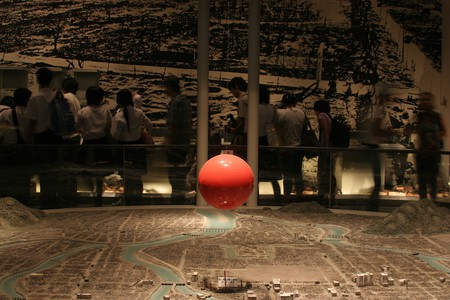 Take a stroll around the Peace Memorial Park to see the memorial monuments, including the Children’s Peace Monument and the Atomic Bomb Dome. If you have time to spare, Hiroshima Castle is also within walking distance. 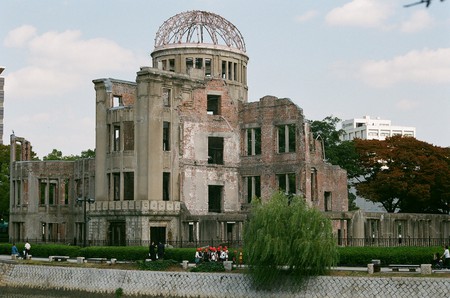 In the afternoon, recover your overnight bags from the locker at Hiroshima Station and take the local Sanyo Line bound for Miyajima-guchi and Iwakuni. The trains run every 15 minutes and take about 30 minutes to arrive at Miyajima-guchi Station.

From there, transfer to the JR Ferry which will take you on a very short cruise to Miyajima Island, home to Itsukushima Shrine and the world’s only torii gate that appears to float on the sea during high tide. 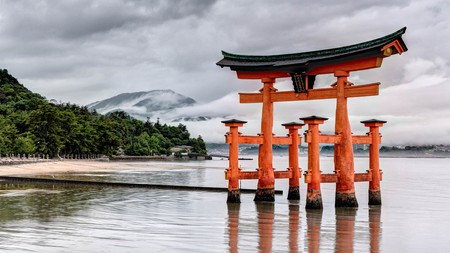 3pm: Check-in to the ryokan

Check in to your lodgings at Kinsuikan, a traditional ryokan inn that’s conveniently located within a short walking distance of Miyajima Port and Itsukushima Shrine. Many of the rooms offer an ocean view of the famous torii gate. Drop off your bags in your room and quickly freshen up before heading out again to explore the island.

The top of Miyajima’s Mount Misen offers a 360-degree panorama view of the island and the surrounding Seto Inland Sea. Although hiking to the summit takes around two hours, you can take the Miyajima Ropeway to quickly reach Shishiiwa Station, located about 100 meters from the top. From there, it takes about an hour to explore the sites at the top of the mountain. Keep an eye on the time and be sure not to miss the final gondola back or you’ll have to hike down. 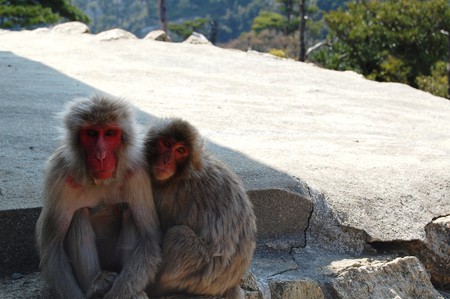 If you have time after Mount Misen, there are a number of other worthy sites to visit around Miyajima, including Daisho-in Buddhist temple at the base of Mount Misen, the Five Story Pagoda, and Omotesando Shopping Street, the perfect place for souvenir shopping or a pre-dinner snack. Catch an unforgettable sunset behind Itsukushima Shrine from Mikasano Hama Beach.

Return to Kinsuikan for a luxurious kaiseki meal featuring the very best locally sourced seasonal ingredients. Depending on your room plan, you may either dine in-room or at the ryokan’s dining hall. The menu varies by the month and season, but you can be sure of an incredible dining experience any time of year.

After dinner, take a stroll around the peacefully quiet island. Most of the businesses will be closed for the evening, but Machiya Dori is a charming street to walk through by lantern light. Itsukushima Shrine and a few other sites nearby are illuminated every evening from 30 minutes after sunset to 11pm and offer an unforgettable nighttime view. 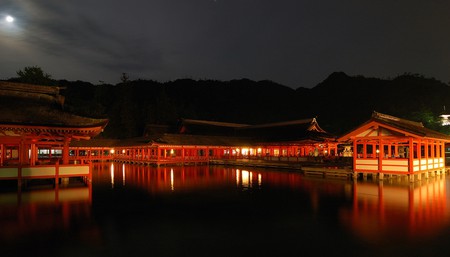 When you return to the ryokan, enjoy a relaxing soak in the onsen before bed and set an early alarm for the morning.

5am: Walk under the torii gate

Rise at dawn to stroll under the big torii gate of Itsukushima Shrine during low tide. At this hour, it’s possible to walk right up to and touch the gate and watch the sun rise. Return to the ryokan to grab a quick nap before enjoying a Japanese-style breakfast in the dining hall before check-out.

Take the JR Ferry back to Miyajima-guchi and make a quick stop to pick up a bento lunchbox to-go from the restaurant Ueno, which opens at 10am. They specialize in anago-meshi, a famous Miyajima dish of steamed conger eel over rice.

Catch the train back to Hiroshima Station to board the bullet train to your next destination, and enjoy your bento from the comfort of the shinkansen.