How To Spend 24 Hours in Beppu: A Complete One-Day Itinerary 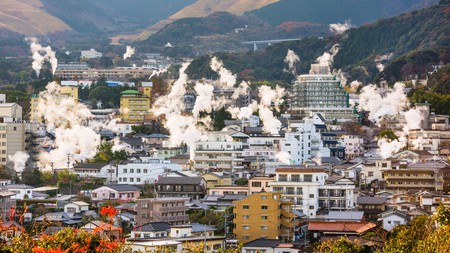 It’s been called the Las Vegas of onsen, but there is more to Beppu than just hot water. Here’s how to spend a day in Japan’s hot spring capital, including the chance to experience aspects of the city’s golden age, sample traditional cuisine and even take a trip to Kannawa.

Nestled at the eastern edge of Kyushu where the slopes of Mount Tsurumi dip down to meet the glittering waters of the Seto Inland Sea, Beppu is Japan’s greatest spa town. People have been coming to relax and to heal here since the water’s healing properties were discovered by wounded samurai in the 13th century. Today, there are some 2,300 springs discharging more than 130,000 tons of boiling water every day.

Perhaps it’s the weather – the endless days of blue skies and billowing white clouds – or perhaps it’s something in the water, but the unhurried pace of life here is infectious. Whether you are being buried in sand, wandering the mist-shrouded hills of Kannawa or discovering the city’s eight ‘hells’, Beppu is utterly enthralling.

Pro tip: Bring your own towel to Beppu or else you will need to buy one at additional cost at the onsen. Many conbini (convenience stores) sell small towels for around ¥100 (£0.75). 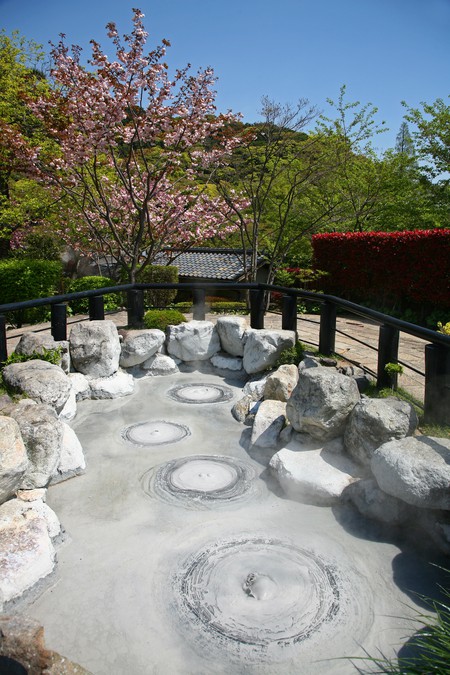 Set yourself up for the day with breakfast at one of Beppu’s most popular spots, the Tomonaga Bakery, located five minutes from the east exit of Beppu’s bustling station. A traditional panya (bakery) with a handsome wooden facade and old-fashioned interior, Tomonaga is beloved of its regulars. As you wait in the (inevitably long) queue for your cheese and butter bun or adzuki-stuffed sweet roll, you might hear your fellow customers whisper to each other, Shōwa no nioi ga suru, (this smells like the Showa Era), a catch-all expression of approval for anything retro, nostalgic or that evokes Japan’s rapidly-disappearing past. Like the city itself, this bakery is anachronistic, slightly shabby even, but loaded with charm. 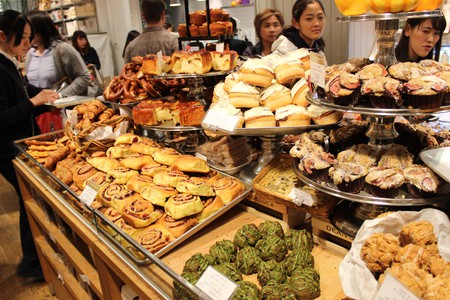 Beppu’s status as a hot spring destination took off in 1873, when the town was first connected to Osaka via a regular ferry route and the newly affluent middle classes began to visit. By the 1920s, the town was a regular stop for Western luxury liners travelling the north Pacific, while flying boats connected the city with the rest of Japan. This was Beppu’s golden age, when tycoons, industrialists, exiled members of the Chinese imperial family and international celebrities such as Bernard Shaw and Charlie Chaplin all stopped in the town to take in the waters.

Having purchased your breakfast, turn right out of the bakery and on to Akiba-dori. When you come to the minimalist (and achingly hip) Othello Specialty Coffee Roaster, turn north and a minute later you will arrive at the enormous Takegawara Onsen. This venerable wooden bathhouse was founded in 1879 and its striking karahafu gable, reminiscent of the Kamakura Era, makes it unmistakable. A survivor from a more glamorous age and an icon of Beppu, this should be the first stop on anyone’s itinerary.

At the bath house, opt for the famous suna-yu treatment in which you are wrapped in a yukata (summer kimono) and buried in hot sand. After 20 minutes, clean off and head to the baths. Be warned, although Takegawara is housed in a magnificent shell, this is not the glamorous spa experience that you might expect from its exterior – the concrete floors are cracked and stained with age, modern conveniences are non-existent, and the water is extraordinarily hot – nevertheless, this is the real thing. If you go to no other hot springs in Beppu, go to Takegawara – it is the definitive Beppu onsen experience.

As you exit, steamed, cleansed and ready to go, you will feel lighter, the grime and stress of the big city having gone, as you stand a little taller and breathe a little deeper. Brushing off a few stray grains of sand, you may be struck by the greens of the mountains that loom over the city, have they grown lusher in the past hour? You notice the charming, ornate Meiji-era streetlights and neat red vintage post box in front of the bath house. Having undergone your Takegawara baptism, you can consider yourself fully immersed in Beppu onsen life, or touji as the initiates call it.

Celebrate your new embrace of slow living by wandering aimlessly in the tiny back alleys and covered arcades that surround Takegawara. Stop off at one of the old-fashioned kissaten (coffee shops), where you can treat yourself to a glass of ice-cold mugi-cha (barley tea). In this area of Kyushu, all feels right with the world, and it’s hard not to think about extending your stay, or moving here permanently.

Pro tip: The waters of Beppu are so powerful that jewellery will corrode if taken into the onsen, so remember to remove it or it will turn black. 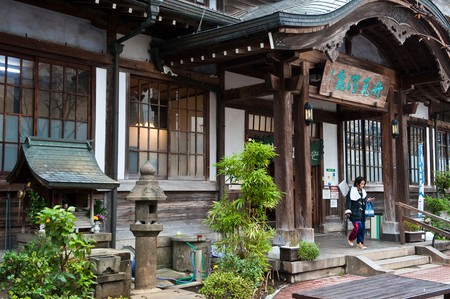 Take the heat off with lunch

On a hot day in the south of Japan, nothing can be more refreshing than a bowl of the town’s signature chilled noodles, Beppu reimen. Ariran, where the dish was invented, was founded in 1950 and is located just five minutes from Takegawara Onsen. The chefs at this venerable restaurant still make their own noodles on the premises every day. If you need something heartier, the Korean-style barbecued beef served at Ariran is all sourced from local cattle raised on the lush volcanic pasture of central Kyushu, and comes highly recommended.

Make your way back to Beppu Station and jump on the bus to Kannawa, about a 20-minute journey. You’ll know you are approaching your destination when you start to see the great plumes of vapour that hang over the hillsides and feel the air begin to thicken with steam and the fug of sulphur. Get off at the bus centre and head towards the tourist information office next door to pick up one of their free maps and take advantage of the Wi-Fi should you need it.

Pro tip: Unlike most Japanese hot spring towns, Beppu is quite spread out. To access some of the more remote – but very worthwhile – sites (Myoban Onsen in particular), consider buying a one-day bus pass for ¥900 (£6.75).

Kannawa is built on what was once a vast, steaming meadow, and today sinuous threads of vapour still leak upwards from every drain and gutter. The neighbourhood is a maze of winding alleys and lanes, loaded with inns, restaurants, cafés, theatres and baths.

Outside Kannawa Onsen there is a statue of the 13th-century Buddhist sage Ippen, who allegedly founded the hot spring. Ippen is best known for popularising Odori Nembutsu, a subsect of Buddhism in which believers were brought to a state of ecstasy while dancing, singing and praying together naked. If you have a specific place on your body you are looking to heal while at the onsen, use one of the dippers provided to pour water onto that part of Ippen’s statue to encourage his intercession. 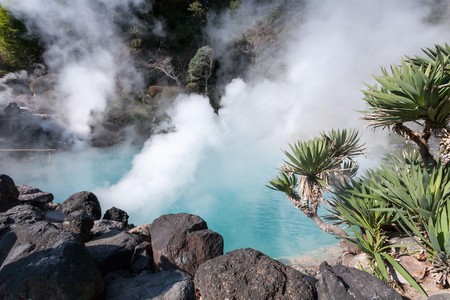 This Jigoku is a multi-colored volcanic pool of boiling water in the Kannawa district in Beppu, Japan | © Vittoria / Alamy Stock Photo

Get a break from the steam at Kannawa’s other attractions

For another glimpse of Beppu’s glamorous past, drop into the elegant Fujiya Gallery next door to the Kannawa Onsen. Originally a ryokan built by Japan’s pre-war tycoons to entertain their friends and rivals, this building has been meticulously restored and now holds regular small concerts and art exhibitions. Or, for something completely different, walk 10 minutes down the hill towards Beppu Bay, to the unexpectedly delightful Oita Fragrance Museum. Visitors can sample an amazing collection of rare scents from around the world or take part in a workshop where you construct your own perfume to take home.

If your feet get tired tramping the hillsides, keep an eye out for ashiyu. These free public foot baths are positioned on the roadside and feature a chamber at the bottom into which you can insert your feet to freshen them up.

There’s no escaping steam in Beppu, and dinner is no exception. Jigoku Mushi Kobo is a community cooking initiative a few steps down the street from the Kannawa bus terminal. Select your ingredients from the vending machine at the door – options include seafood, fish, beef, chicken and vegetables. After exchanging your ticket, you will be issued bamboo baskets containing the prepared food. Local volunteers will then show you how to lower these into the outdoor steamers, and give you a timer which will indicate when your order is done. The quality and freshness of the food is exceptional, but steaming can be a little bland so do bring your own preferred seasonings or dressings to perk things up should you think it necessary. 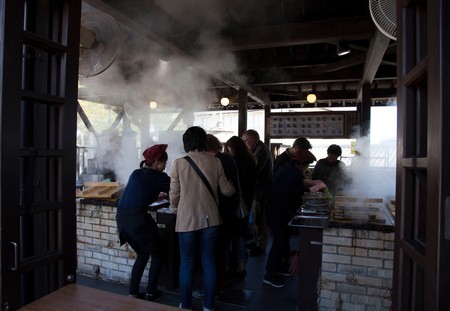 Spend some time in ‘hell’

As dusk settles on the hillsides of Kannawa, now is the time to hit Beppu’s most famous tourist attraction. The jigoku (hells) are open pools of boiling hot spring water and mud, that echo the Japanese depiction of hell, in which sinners are tortured for eternity in lakes of boiling blood. These kitschy attractions are immeasurably improved by the nighttime lighting, which brings to life the eerie setting. If you are under time pressure, the Umi-Jigoku (sea hell), with its dazzling blue waters, is the most striking of all the hells. But for lovers of all things crocodilian, a trip to the bizarre Oniyama-Jigoku (Demon Mountain Hell) is a must. This jigoku makes use of the abundant steam to heat enormous greenhouses in which dozens of species of crocodile are raised.

If you do go to the Oniyama-Jigoku, take note of the rather sad-looking modern building opposite. For decades this hall housed Beppu’s legendary hihokan (treasure palace). This sex museum was famous worldwide for its collection of scale models of animal phalli, Edo-era shunga (erotic woodblock prints) and animatronic dioramas – a series of ever more outrageous displays that climaxed in a remarkable life-size tableau featuring a disrobed Snow White and all seven dwarves. The (now empty) hall is sometimes used for displays of Buddhist statuary, but these can safely be skipped-over by all but the most ardent fans of devotional art. 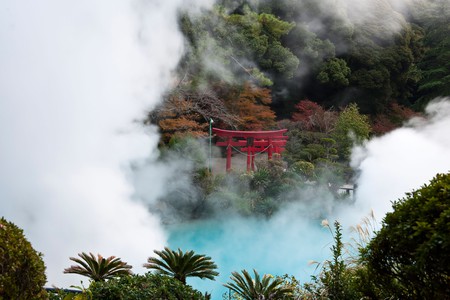 Drink in the atmosphere at BAR556

Having had your fill of hells, jump on the bus back to Beppu station and make your way towards BAR556, which is located on the waterfront near the Beppu Tower. The bartender, Koichi, specialises in cocktails mixed from Oita sake, local kabosu citrus, cherry blossom and even water from the hot springs. A supremely knowledgeable guide, for a small fee he will give you a cocktail-making class before leading you on a guided tour of the city’s nightlife.

End your night in Beppu with a sweet goodbye

After exiting the bar, head across the street to Genova, a tiny independent gelateria that is open until midnight. Everything is made fresh on the premises, and the unexpectedly forthright owner, Mr Abe, claims his strawberry ice cream is the best in all Japan. Disagree at your peril. 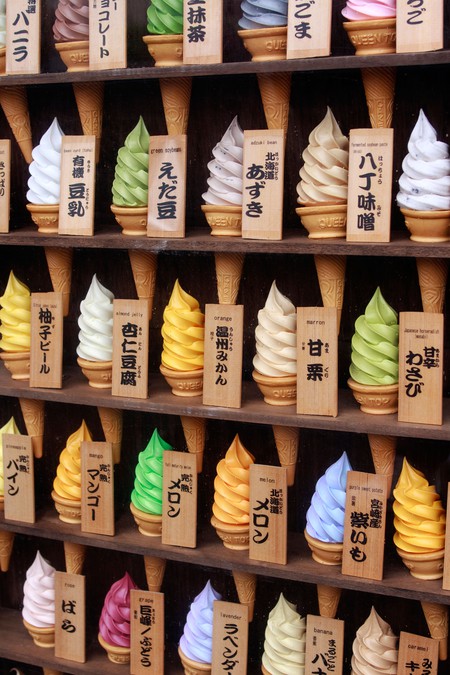