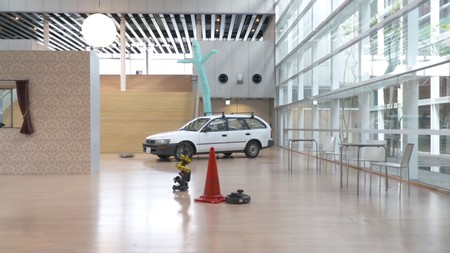 The Avatars exhibition | Courtesy of YCAM

Technology has the potential to make art more accessible and interactive. An installation in Yamaguchi, Japan, certainly ticks both of those boxes: allowing users to control objects in the exhibition from anywhere in the world.

The exhibit is called Avatars, and features 16 different objects equipped with cameras, microphones and microcomputers that allow them to be controlled remotely over the internet.

Users simply log in to the installation’s website, and then can choose to view the exhibit from any of the objects or avatars. These avatars include a traffic cone, a Roomba, and a statue. Visitors are then able to move the avatars around the space. Objects that also have microphones and speakers allow users to talk out of them as they move around the exhibition.

“Those objects exist as substitutes of – yet together with – real human beings (the visitors) in the same real environment that is subject to physical laws, rather than operating in a virtual space,” the website says. “Against the backdrop of the age of IoT, where all kinds of things are connected through networks, and artificial intelligence is about to mature, this work observes the new relationships that emerge when inorganic, non-autonomous objects transform into persons that act and perceive the world according to their own intentions.”

Built-in sensors prevent the objects from getting too close to each other. The sensor detects when the object has reached a minimum distance from something else and prevents it from moving forward.

The exhibition was created by So Kanno and yang02, two Japanese artists with a focus on technology. The installation will be in Yamaguchi Center for Arts and Media until May 14, 2017.

Users will have to wait until the exhibition is actually open before trying it out, between 10 a.m. to 7 p.m. local time.