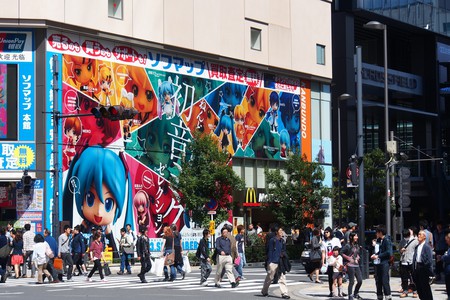 When it comes to the somewhat cliché, but still undeniably iconic views of contemporary Japan, many people picture a metropolis that looks a lot like Akihabara, the Tokyo neighbourhood flooded with neon signs, maid cafes and J-Pop music. In reality it’s a small subsection of the city as a whole, but its fantasy world style has long garnered a reputation that far exceeds it size. One of the biggest exports from the neighbourhood has been J-Pop, the manic, sugary sweet and, for outsiders, often confusing genre of music that is as mysterious and intriguing as it is colourful. So how did this tech mecca become the home of J-Pop music? Let’s take a look.

To explore the origins of Akihabara’s J-Pop culture, we first have to look at otaku history. The term ‘otaku’ identifies a very specific type of nerd or geek culture that centers around electronics and pop culture, especially manga and anime. The term came into mainstream consciousness in 1983 when Akio Nakamori, a columnist and editor, coined the term in his essay ‘Manga Burikko’. Once typically used as a derogatory term, people came to proudly define themselves as ‘otaku’ as a way of identifying their interests and lessen its negative connotations.

Following WWII, Tokyo and the rest of Japan underwent a drastic evolutionary transformation. The wreckage left from the war, plus the US occupation of the nation, brought with it some pretty intense cultural shifts. There was a lot less wealth in the country, food and water were scarce and foreign influence was seeping into all aspects of Japanese daily life. This meant people started becoming a little more individualistic, doing business for themselves and becoming innovative in terms of businesses growth. 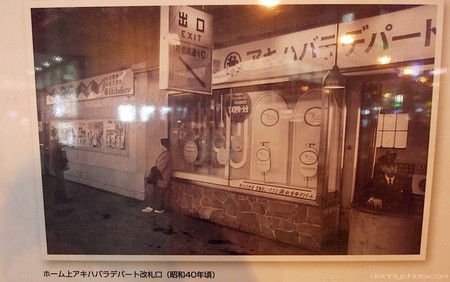 Roadside stalls became a common sight, though many of which weren’t technically legal. The stalls popped up in clusters known as Yami Ichi (aka black markets) and before too long, Akihabara’s skeleton of weaving alleyways and shopping avenues was coming together. Following the war, those who were technically skilled in the world of electronics, and who had been previously positioned elsewhere around the world, returned to Japan. There weren’t a lot of jobs available during these post-war years, so many engineers and other talented techies started making items to sell.

People started selling handmade electronic goods like radios. It wasn’t long before the authorities (known as ‘General Headquarters of the Supreme Commander for the Allied Powers’) came along and shuffled the vendors off to another tidier spot in the city. This spot became the Akihabara you see today.

As the area began to garner quite a reputation for being an electronic hotspot, more and more tech-lovers, geeks and innovators came together to shop, meet and create what would come to be know as ‘the city of the future’. In the 80s and 90s this tech evolution focused on a large number of consumer goods like personal electronic items and, of course, video games. With the video games came video game artists, manga illustrators, and lovers and consumers of pop culture. 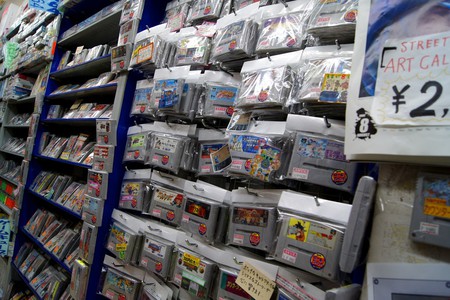 J-Pop and otaku culture and how the two combined

As a neighbourhood, Akihabara was built upon a sense of escapism. Weird, futuristic, dream-like: everything about it was set atop a slightly altered plane of reality. As each new and strange store or outlet opened, be it a niche fashion outlet or an obscure fetish maid café, Akihabara set a new precedent, pushing the boundaries just that little bit further.

In the 2017 BBC Four Storyville documentary ‘Tokyo Girls’, this sense of escapism is described as being intrinsically linked to the marketing of Japanese idols. Japanese cultural commentator Akio Nakamori draws an interesting comparison between the J-Pop industry of today with the punk boom in the mid 1970s. He says, ‘There are parallels between 1970s London and Tokyo today. The economy stagnated and the cultural scene was dead. People were looking for something new. London invented the Sex Pistols. The Japanese answer was idol culture’.

Rather than rebelling against society, which is definitely not something most would come to expect in a country built upon the foundations of group mentality, many Japanese have created an inviting world to step into that provides relief, solace and comfort. This world has been adopted by people across the planet, but most of its fans are here in Japan.

Everything that surrounds the mainstream J-Pop world is meticulously curated. The costuming, personalities, even the ‘real lives’ of the band members all are crafted to build a narrative that appeases a specific type of consumer. There have been countless bands that have come and gone, but none of them have epitomised the world of J-Pop otaku fandom and obsession like AKB48, a group built for and by Akihabara.

Named after the suburb itself, AKB48 may not have been Japan’s first pop group, but they’re by far the nation’s most successful. One of the main reasons for the group’s success is its unconventional marketing prowess that saw the group rise to fame. We’ve written extensively about the group previously, but essentially they quenched their rabid fan’s thirst like no group that came before. 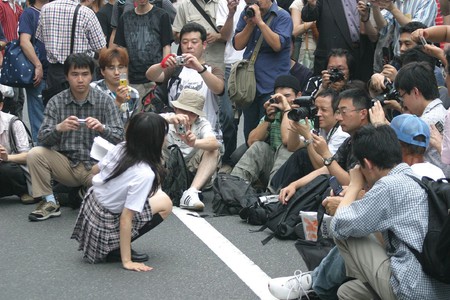 The way virtual reality brings a whole new immersive level of game play, the band’s touring was built around accessibility. The group has a theatre in the heart of Akihabara, where they play almost every single night. For those who miss out on tickets, there’s always the AKB48 café, where fans can drown their sorrows over a cup of branded coffee surrounded by perfect images of the performers, before picking up a piece of merchandise as a consolation prize.

Although there’s probably a book’s worth of exploration into the connection between the area and the J-Pop music scene, nobody has really captured the geeky fandom market like AKB48. Combining accessibility of performances with niche marketing (given the huge number of girls in the group) the band managed to marry geekdom with pop music, creating a failsafe formula for attracting rabid fans. For a deeper dive into the band and its history, be sure to check out this introduction.

How to get to Akihabara

The best way to Akihabara Station from most of the major Tokyo neighbourhoods is via the JR Yamanote, the city’s main loop line. Otherwise the JR Keihin-Tohoku Line, JR Sobu Line, Tsukuba Express and the Hibiya Subway Line all stop at Akihabara Station. If you want to see two very different, yet close areas of Tokyo, start at Nippori, one of the city’s most untouched neighbourhoods, then take a 10 minute train ride or 45 minute walk to the neon drenched corner of Akihabara.