How Real-Life Locations Inspired the Legend of Zelda Games 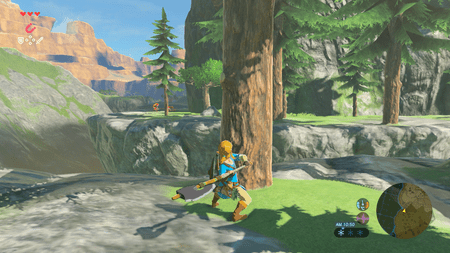 As video games grow and develop from polygons to photorealism, creators of The Legend of Zelda series use real-world landscapes to breathe life into virtual ones.

Like movies and novels, video games aim to transport players to a different world. When The Legend of Zelda hit the Nintendo Entertainment System in 1986, the solid gameplay was enough to keep players hooked. Enter The Legend of Zelda: Ocarina of Time 12 years later. The groundbreaking Nintendo 64 console introduced a world of new possibilities for games, from cinematic cutscenes to 3D environments. The visual upgrade put story and setting in the forefront, challenging developers to fill a much larger canvas with realistic environments.

Fast forward to 2017, and The Legend of Zelda: Breath of the Wild redefines the meaning of awe-inspiring when it comes to video games, with a stunning open world. According to the making of documentary on YouTube, developers filled this massive map by putting all of their ideas into a melting pot; this kind of open-forum creative process had been honed at Nintendo for decades, as technology allowed them to evolve from pixelated levels on the NES to a map the size of a real-life city on the Nintendo Switch. Each person who contributes to a Legend of Zelda game brings their own life experience to the table: that includes the real-world places they’ve lived, visited or learned about.

Looking down from above

During a series of interviews with former Nintendo president Satoru Iwata, Legend of Zelda creator Shigeru Miyamoto expressed the great impact of nature on his team’s first 3D landscapes. Giving the example of the Zora River in Ocarina of Time, Miyamoto said that he initially requested that designers make “a landform like you don’t usually see”. That is a tall order when, as Miyamoto puts it, “lots of real landforms far surpass human imagination,” so even if developers made something really unusual with polygons, “for some reason it would still look like landscape scenery that you would see in real life”.

Designers ended up deriving their ideas from the sense of wonder you get while flying in an aeroplane. “When you look down from a point near the Arctic Circle,” Miyamoto told Iwata, “you see lots of strange landforms that make you want to go down and take a look around. When I see places like that, I realise how limited human thought is.” He specifically notes the journey from Europe to North America. Looking down from above on such a route might reveal the dramatic, dotted coasts of Norway, Scotland or Ireland; making one’s way past the Atlantic and inland along the US-Canada border, an overhead view of the Great Lakes is sure to make anybody with an active imagination want a closer look – a feeling of adventure that Miyamoto sought to capture in Zora River’s design.

With these high-flying perspectives in mind, developers set to work making Zora River a distinctive landmark in Ocarina of Time, featuring a towering waterfall surrounded by winding slopes. Breath of the Wild’s Zora River keeps with the same concept: a curving and dangerous path upstream leads to a pristine lake. It’s an enticing view from overhead on the map, and one that’s ripe for exploration.

In a perfect world, environments and gameplay go hand in hand. Miyamoto told Iwata that when creating Kakariko Village for Ocarina of Time, the designers wanted to solve a practical (and silly) conundrum: our hero Link needed to get up high, so that he could jump off ledges and use a flapping chicken to glide around. Sure, the village was situated at the foot of a mountain, but they’d need to create height in a way that felt organic. At the same time, Miyamoto was looking to spice up each area, saying that “whichever village I saw, I thought it was rather bleak and boring”. The team would ultimately kill two birds with one sword.

In order to create the distinctive look he was going for, Miyamoto began referencing villages in China’s mountainous districts, “such as you might see in a documentary television show”. Using this lead, the team took note of the way homes were situated, and poured that into the design of Kakariko Village. The final product is a quaint mountain settlement similar to Langde Miao Village in China’s Guizhou province: steep slopes and stairs, wooden homes stacked on terraces and an overall sense of seclusion. In this virtual village, none of the structures feel shoehorned into the environment for gameplay purposes. Still, players can seamlessly make their way up to rooftops and, indeed, leap off to gleefully glide around while holding a chicken aloft.

Like Zora River, Kakariko Village reappears throughout the franchise. When you compare the 1998 version and the 2017 version, the original inspiration is still apparent. Although Breath of the Wild’s Kakariko Village is chock-full of Japanese Shinto architecture and symbolism, unlike its Chinese-inspired predecessor, it still utilises terraces to create height, surrounding you and making you feel as if you’re truly in an isolated mountain village.

A walk around the block

Breath of the Wild was an unprecedented challenge for Nintendo’s developers, due to the sheer size of its map. They had already decided that they wanted players to be able to walk or gallop from A to B without experiencing any disruption such as loading screens. In the making of documentary, director Hidemaro Fujibayashi said that after decades of creating smaller games with transitions and loading screens between areas, it was difficult for his team to comprehend how this new, seamless movement would work.

Fujibayashi didn’t have to look far for a muse. As it turned out, he said, “The easiest way to get a sense of scale was to think about the size of Kyoto,” which is not only the location of Nintendo HQ, but also Fujibayashi’s home town. “Since it’s where I was born and raised, when I actually applied Kyoto’s geography to the game, it was really easy for me to think about the distance… I could imagine how tired I’d be if I walked across it, how much time that would take or how quickly a horse could run that distance.”

Perhaps as a result of scaling it to a real-world city, Breath of the Wild’s map ended up eclipsing the size of any other title in the franchise. (For comparison, the “small” starting area in Breath of the Wild is bigger than the entirety of Ocarina of Time.)

Although little is known about Breath of the Wild’s forthcoming sequel, Fujibayashi is back at the helm as director to continue the story, in what looks to be a much more eerie environment, based on the teaser trailer released in 2019. If Nintendo’s track record is anything to go by, gamers are sure to experience more landmarks that are reminiscent of real-life locations, but remarkable all on their own.