How KFC Hijacked Christmas in Japan 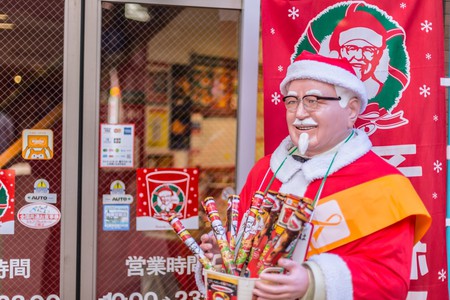 On December 25, 2015, I woke up, got dressed and left my apartment to go to my job as an English teacher in Ishiyama, a small town in central Japan. It seemed the same as most other mornings –Christmas isn’t as much of a “thing” here as it is in the West and a lot of the country still goes to work or school. One thing, however, was noticeably different.

Every time I walked past a convenience store, I kept seeing cheerful young women dressed in Santa outfits. They hollered enthusiastically for customers while standing next to portable cookers housing one thing and one thing only – fried chicken. Later that day at work, after my colleagues and I had exchanged presents and cards, we sat down to a decades-old yuletide tradition in Japan – a magnificent feast provided by KFC. 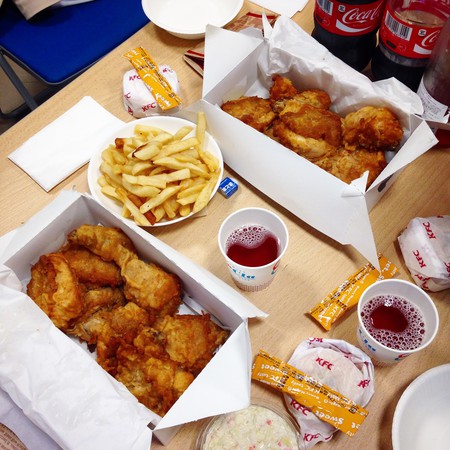 KFC at Christmas may seem like a somewhat odd, if not downright repellant, option to some Westerners, but in Japan it’s a cultural institution up there with Super Mario and heated toilet seats. It’s also big business – an estimated 3.6 million families visit the fast food chain every December to partake of its goods. Daily sales for Japan KFC can increase to 10 times the usual sales volume around this time. Special Christmas meal packages – much like the ones I enjoyed at work – account for as much as a third of annual sales in Japan for the franchise.

Statues of Colonel Sanders in Santa garb are commonplace in Japan at Christmastime. Long queues outside restaurants are a regular sight and demand is such that it’s sometimes necessary to order weeks in advance. The story of how KFC effectively hijacked Christmas in Japan goes back to the 1970s and the work of one man, Takeshi Okawara, a marketing visionary.

Educated at Harvard University, Okawara was the manager of the first-ever KFC restaurant in Japan. One fateful day in 1970, he overheard foreign customers in his store, talking about how much they missed being able to eat turkey during the festive season. That night, as legend has it, he woke up and scribbled down an idea which came to him in a dream: selling a “party barrel” at Christmastime.

As Okawara saw it, if customers couldn’t enjoy turkey at Christmastime, fried chicken was next best thing. He began marketing his party barrel – a red-and-white bucket filled to bursting with goods – and the scheme was such a success that it went national four years later. It even had its own name – Kurisumasu ni wa Kentakkii, or Kentucky for Christmas. A tradition was born, and Okawara’s marketing genius saw him become president of KFC Japan from 1984 until 2002.

In recent years, Kentucky for Christmas has evolved further with the inclusion of family-sized boxes filled with chicken, cake, and wine. Last year, the company rolled out its special Kentucky Christmas dinner packages, ranging from a box of chicken pieces all the way up to the “premium” deal; a whole-roasted chicken and sides for 5,800 yen (about £39). 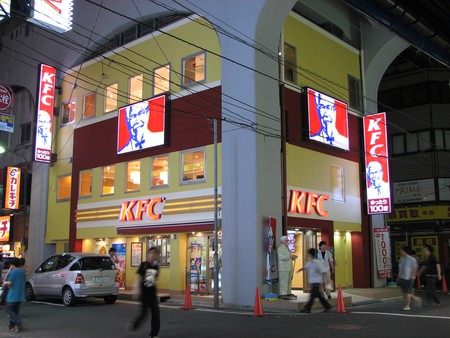 While such a tradition may appear crass and trashy to outsiders, Japan’s love of KFC at Christmas is utterly in keeping with the nation’s culture. Only 1% of the country is Christian and in one of the hardest-working countries in the developed world, those that choose to observe Christmas don’t have time to slave in the kitchen for hours on end cooking up an elaborate festive banquet. It’s also worth pointing out that Japan’s high standards and diligence in the workplace ensures that KFC tastes notably different (and much nicer) than at counterpart restaurants in the West.

And while it started out as means of pushing a company’s product, feasting on a party barrel in Japan is now seen as a social, inclusive occasion, a means of getting together with loved ones and co-workers and celebrating the festive season. Not all that different from the true spirit of Christmas, then. Just don’t expect it to catch on in the West anytime soon.