How Did the Japanese Become So Obsessed with Whisky? 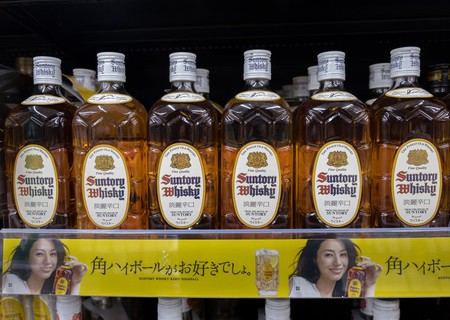 It’s one of the most popular drinks in Japan, and the story behind how it came to be is more fascinating than you might realise. Read on to find about how Japan’s love affair with whisky came to be.

Earlier this month, whisky lovers were weeping into their crystal tumblers when it was announced that Suntory will halt production of two of its most popular lines. While connoisseurs poured one into the ground (not literally, lest they waste their precious fluids), analysts noted something curious – namely that in the space of a few decades, Japan has gone from a country where whisky consumption was in a slump to one where it is almost the national beverage (alongside, of course, green tea). And as Suntorygate proves, the stuff is proving so popular that supplies are running out.

Relatively speaking, domestically made whisky is a very young drink in Japan and has been around for barely a century. Prior to its arrival, nihonshu (known in the West as sake) and shochu were the two most popular spirits made in Japan. Now all that has changed – sake production has decreased since the 1970s and the nation’s whisky is now regarded by many as the best in the world.

The story of Japanese whisky is an epic saga that covers thousands of miles and includes not only a cultural exchange between two very different nations (Scotland and Japan) but also a long-distance romance. The success of the drink is largely down to two men: Shinjiro Torii and Masataka Takaretsu. Our story starts in 1918, when Takaretsu was dispatched to Scotland at the behest of the Settsu Shuzo liquor company, under orders to crack the code for making Scotch whisky and bring it back to Japan. 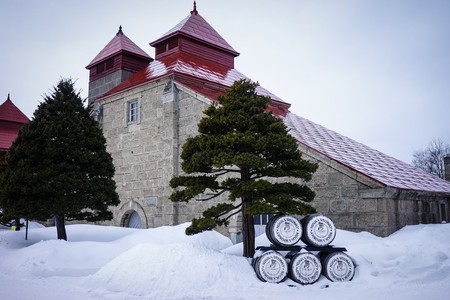 It was a daunting task – there were no whisky distilleries anywhere to be found in Nippon in 1918. Takaretsu, whose family had made sake for generations, was plunged into an utterly alien environment when he was enrolled at the University of Glasgow to study chemistry (the first-ever Japanese student to do so).

While completing his studies, he worked at two Scotch distilleries, observing the tricks of the trade. He also met and fell in love with a Scottish woman, Jessie Roberta Cowan, and the pair married in Glasgow in January 1920. Soon after, she would accompany her husband back to Japan, a move so unprecedented that it even inspired a TV drama based on their romance (in a very meta state of affairs, the popularity of the show actually caused a huge bump in demand for whisky). Takaretsu was intent on fulfilling his life’s purpose – building a whisky distillery in Japan.

Things took a disastrous turn when, in the midst of a weakened global economy, Takaretsu returned to Japan only to be fired by Settsu Shozo. His spirits were low, but he was saved by Shinjiiro Torii, Japan’s other whisky pioneer, who in 1923 had begun constructing the legendary Yamazaki Distillery, just outside Kyoto. Takaretsu was brought on board, and the facility was open for business by 1924.

The pair’s first-ever batch, Shirofuda (which translates as “white label”), wasn’t the hit that they were hoping for, as it proved a little too robust for refined Japanese palates. However, in 1937 they hit paydirt with a variety that they named Kakubin, a far smoother drink that proved massively popular. It is still made in the present day, best enjoyed with a splash of soda water.

When Takaretsu’s contract expired, he and his wife packed up and headed for Yoichi, in the Northern island of Hokkaido. They started a company which would become Nikka, now one of the biggest and most venerable producers of whisky in the country. Torii formed the Suntory brewery, a Japanese behemoth that produces numerous spirits and soft drinks and has production distilleries across the globe. So all-powerful is the brand that it acquired bourbon maker Jim Beam in a US$16 billion deal.

Making fine whisky is a process that requires determination, skill and finesse, all qualities for which Japan is known. As master distiller Ichiro Akuto of Venture Whisky so succinctly put it in an interview with The Guardian: “We love perfecting the art of making things, so you could say we’re quite geeky in that respect. That determination to do things right extends to whisky.”

For years, the biggest markets for Japanese whisky were either at home or in Europe. All that changed in 2001 when America got its hand on Suntory’s Yamazaki Single Malt (a drink that had been available in Japan since 1984). It was a massive success with American whisky drinkers, giving Suntory its foot in the door, which it would capitalise on by rolling out successive varieties of whisky with similar results.

Suntory’s Hibiki 17-year-old blend – as popularised by Bill Murray in the movie Lost In Translation – was one of the varieties that grew in popularity overseas, and one of the lines that is being suspended. But it’s not all doom and gloom – the recent surge in demand means that smaller distilleries are now popping up across Japan.

As for Takaretsu and Torii, the former died in 1979 (his wife died 18 years previously), and the town of Yoichi is twinned with Bishopbriggs in East Dunbartonshire, Scotland. Torii passed away in 1962. His grandson Shingo Torri is currently the Master Blender at Suntory. Despite all their hard work, the two never got to see Japanese whisky become the global phenomenon it is today, but their legacy will live on for generations to come.