Hiroshima Oysters: Where To Eat the City's Famous Delicacy 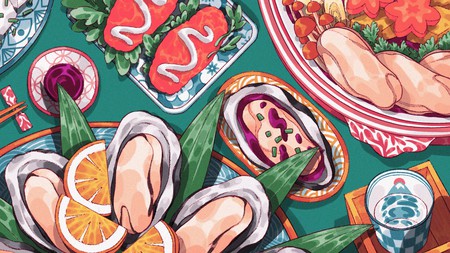 As Japan’s largest oyster-producing region, it’s no surprise that visitors are spoiled for choice when it comes to finding oyster restaurants in Hiroshima. From charming oyster huts to fine-dining establishments, check out Culture Trip’s guide to where to eat oysters in Hiroshima.

Whilst oysters have long been seen as a winter speciality in Japan, as it has traditionally been deemed preferable to consume oysters in the colder months, in recent years Hiroshima’s oyster farmers have also started breeding special types of oyster known as natsugaki (summer oysters) so that the delicacy can be enjoyed all year round. The prefecture now supplies two-thirds of Japan’s oysters. 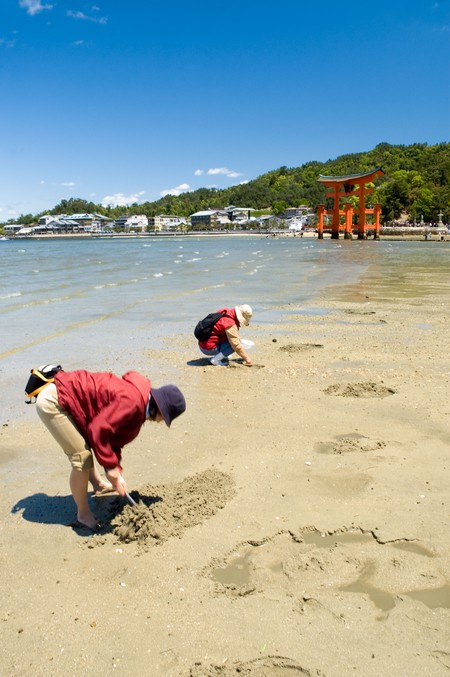 During the main oyster season, which runs from January to the end of February, many of Hiroshima’s coastal towns hold oyster festivals, the largest of which takes place on Miyajima Island on the second weekend in February each year. The festival sees local vendors from around Hiroshima prefecture congregate to sell oyster dishes for around ¥200 (£1.50) each while traditional Japanese entertainment, including taiko drumming and kagura folk theatre, takes place on stage. 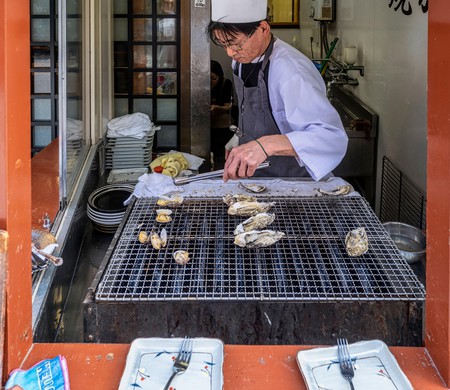 In Hiroshima, oysters are most popularly eaten in five different ways: fried in a tempura batter; grilled; raw with a citrus soy sauce called ponzu; steamed and as part of an oyster and miso hotpot called kaki-no-dotenabe. Indulge in an oyster overload and try them all five ways by following Culture Trip’s recommendations of where to eat oysters in Hiroshima. 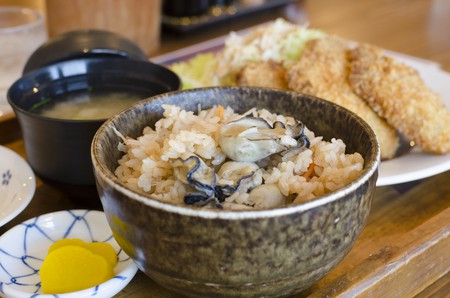 Located in the Fukuromachi area of Hiroshima city, close to the main Hondori shopping street, the modern Mabui oyster bar offers a European-influenced menu and wine selection. The two-storey, warmly lit restaurant has a relaxed atmosphere and features a long bar with counter seating in addition to cosy alcoves for small groups. Mabui’s menu includes oysters sautéed in garlic butter or steamed in white wine, oyster chowder or oyster and vegetable fritters, along with a five-course tasting menu. For any non-oyster eating customers, other menu options include grilled pork and chicken dishes, or vegetarian pastas. Expect to pay around ¥3,000 (£23) per person for dinner, excluding drinks.

Kanawa Oyster Boat is situated less than a five-minute walk from the Atomic Bomb Dome, and is moored by the river, offering scenic views opposite the Peace Memorial Park from its traditional low tables and tatami flooring. This floating restaurant sources its oysters from the Okurokamijima area of Hiroshima, where you’ll find some of the cleanest waters in the Seto Inland Sea. One of the more expensive dining options for oysters in Hiroshima, the restaurant offers a special set menu priced at ¥12,000 (£90) per person which includes a selection of appetizers, grilled oyster, oyster and apple gratin, fried oysters, tempura oyster and oyster hot pot with miso. For a lighter option, try the raw oysters and sparkling wine set priced at ¥1,500 (£11) each.

For a more casual dining experience with a relaxed izakaya-style (Japanese pub) atmosphere, try Umihei in the city’s Fukuromachi district. Its speciality oyster course is priced at ¥3,200 (£24) per person and includes a selection of grilled and deep-fried oysters along with sashimi and the miso-based oyster hotpot, kaki-no-dotenabe. Smaller individual oyster dishes are also available to order along with classic izakaya fare, including pork skewers, tempura and edamame. Customers will find the atmosphere lively during the evenings, when businesspeople flock to the counter seats after work. There’s also a traditional tatami-floor dining room with low tables and oversized cushions for seats on the second floor if you prefer to sit away from the bar.

This riverside café is located by the waterfront on the Kyobashi River in Hiroshima’s Naka district, offering visitors an al fresco dining experience on good weather days. The restaurant’s set-course menus are particularly popular, and prices start from ¥3,000 (£23) per person increasing to ¥5,000 (£38). The lower-priced menu gets you three different kinds of oyster appetizers followed by a selection of oyster gratin dishes, and a main course of sautéed oysters served with a crusty baguette. Pro tip: Arrive early in the evening if you don’t have a reservation, as the oyster set meals are often sold out by 8.30pm on busy days.

Just a couple of minutes’ walk from Hiroshima’s Peace Park lies Ekohiiki, a casual seafood restaurant with an extensive oyster menu, in addition to other dishes such as sashimi, crab and octopus. On the oyster front, choose from a variety of options cooked any way you like – baked, steamed, fried or grilled – along with oyster curry and rice and oyster miso hotpot. Ekohiiki’s prices are very reasonable with most items on the oyster menu costing between ¥600 (£4.50) and ¥1,000 (£7.50) each. Pro tip: The restaurant also stocks a wide selection of sakes to try, brewed locally in Hiroshima.

An Italian-influenced riverside restaurant and café located by Motoyasu Bridge, this restaurant has two menus: an Italian option featuring pizzas and pasta, alongside a separate oyster menu which includes Japanese oysters served in Italian dishes. Example dishes from the oyster menu include risotto with oysters, homemade focaccia with oyster gratin and spaghetti with oysters and spinach in a creamy sauce. There’s also a sunny terrace seating area which is particularly pleasant during cherry blossom season. Expect to pay upwards of ¥1,000 (£7.50) for a main course from the oyster menu, while a gluten-free menu and vegetarian options are also available.

Restaurant, Seafood, Japanese
Facebook
Email
Twitter
Pinterest
Copy link
Share
One of the more unique options for eating oysters in Hiroshima is to visit Guttsuri-an, a seafood and barbecue joint where diners are expected to grill their own food at the table, in the style of a Korean barbecue restaurant – although staff are on hand to provide cooking instructions in English if needed. The restaurant’s location is a little off the beaten path, situated in the south of the city and around 35 minutes by public transport from Hiroshima station. In addition to fresh oysters, barbecue combination sets are popular menu choices and include a variety of seafood such as sashimi, shellfish and squid. It is strongly recommended to make a reservation in advance due to the restaurant’s small size and location.

A speciality oyster and mussel restaurant located in Hiroshima’s Naka district, Hakaru is situated a five-minute walk from Komachi station. The restaurant’s European-influenced menu is reflected in its decor, with stone-tiled floors and chandeliers. For visitors feeling particularly ravenous, try the all-you-can-eat mussels and oysters course, which is priced at ¥4,000 (£30) per person, while for diners who want a little more variation, there’s also an all-you-can-eat option priced slightly lower at ¥2,980 (£22.50) for two hours which includes 45 menu items such as paella, pizza and seafood pasta, along with unlimited wine. A lighter alternative is to order a kilo of mussels and oysters for ¥980 (£7.50).

For a dining experience where you can enjoy oysters literally fresh off the boat, Shimada Fisheries is the place to go. A working oyster farm, visitors can grill their own oysters beside the fishing boats they arrived to shore on. Located a short distance from the ferry terminal to Miyajima island and easily reached from Hiroshima city, Shimada Fisheries Oyster Hut is a convenient stop after sightseeing on Miyajima. Menu choices vary from an hour-long all-you-can-eat grilled oysters option for ¥2,300 (£17) per person, to a set course priced at ¥2,000 (£15) including one kilogram of oysters, oyster rice, fried oysters and miso soup. Pro tip: If you have time, join one of the oyster landing tours led by the fishermen taking visitors out to see the oyster rafts.