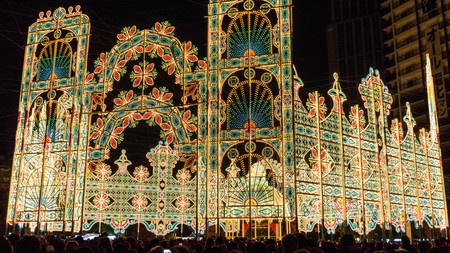 Held in December, Luminarie is one of Kobe's many festivals throughout the year | © Malcolm Fairman / Alamy Stock Photo

The Japanese city of Kobe may primarily be famous for its namesake beef, but the capital of the Hyōgo Prefecture is also home to unique festivals and events. Here are Culture Trip’s top picks.

All year round, Kobe offers up festivals and events that bring in tourists from other Japanese cities and from around the globe. Whether you’re a fan of music, food, art, dance or fireworks, there’s a festival or event for you in this magical city. So, check the calendar, book your flights, and get ready to party in the great port city of Kobe.

One of the most beautiful events you’ll ever see. Infiorata Kobe is a flower festival in the beginning of May where streets are filled with opulent flower paintings. The two-day event first started a couple of years after the Great Hanshin earthquake in 1995. At the end of the festival, onlookers are encouraged to play amongst the flowers and help sweep the beautiful decorations away.

Still going after 50 years, The Kobe Festival is a two-day citywide celebration filled with parades, floats, games, markets and more. Taking place every May, the festival includes Samba troupes dancing in the streets as food and trinket stands line the roads. Typically, you can find around 10 different stages throughout the city where live music performances are making entire town dance.

Typically celebrated on the first Saturday in August, the Minato Kobe Marine Fireworks Festival is one of the most spectacular fireworks shows in all of Japan, where hundreds of thousands of festivalgoers arrive to see the spectacle over the Kobe Marina. All the fireworks are timed to music, adding to the awe-inspiring effect. The festival itself is a celebration for the opening of the Kobe port, which made the city a true international destination. Access to the festivities is via Meriken Park where you can get clear vistas of the explosions.

The Kobe Shinkaichi Music Festival is a classic event that’s been running for more than 20 years and features both local and international bands. The event typically takes place at the beginning of the summer and attracts more than 80,000 people from all over Japan and around the world. Over the course of two days, almost 300 different musicians grace the stages and sidewalks around the entire city.

Held every December since 1995, the Kobe Luminarie is a lights festival that commemorates the Great Hanshin earthquake that obliterated the city in the same year. All over Kobe, artistic light displays drape buildings, trees and various large structures in a symbolic gesture that’s meant to shed light on the darkness that was caused when the earthquake knocked out power all over town.

Fun for the entire family. Each year at the beginning of the clam season, guests are invited to Suma Beach where they can wallow in the shallow waters and go clam digging. Clam hunting season typically runs from April to June. Various events accompany the dig like a treasure hunt and a marine petting zoo.

Those in the know will be familiar with Kobe’s jazz scene. There are hot spots around the city where you can hear the smooth sounds of a saxophone wafting over the streets. Because of the city’s infatuation with the American art form, there’s a yearly festival called Kobe Jazz Street. Every fall since 1982, around 10 venues host jazz nights where artists from Japan and around the world come so they can perform to their fans. The festival itself kicks off with a parade and a marching jazz band rolling through the streets.

The fair day of Kōbō Daishi in Suma-dera Temple

Suma-Dera Temple is a Shingon-Shū Buddhist temple that was built in AD 886. As a place of worship, it’s typically a sombre place to visit but on the 20th and 21st of each month there are events to commemorate Kōbō Daishi who was the founder of the Shingon-Shū sect. On those two days, huge groups of worshippers flock to the temple to pay their respects as street vendors set up shop on the walkways leading up to the temple.