From China to Canada, Fumihiko Maki is Japan’s Global Architect

Often, the wave of globalization can seem like an unstoppable tide, dragging down in its wake anything localized or unique. Japanese architect Fumihiko Maki understands this danger well. In his enigmatically titled (2013) lecture series Modernism on the Open Sea, the Pritzker Prize winner warned against a flavorless, pan-cultural ‘globish’ aesthetic threatening the world of architecture. Much of Maki’s work brings together different world cultures and aesthetics, but rather than homogenizing them, actually highlights their distinctive individuality. 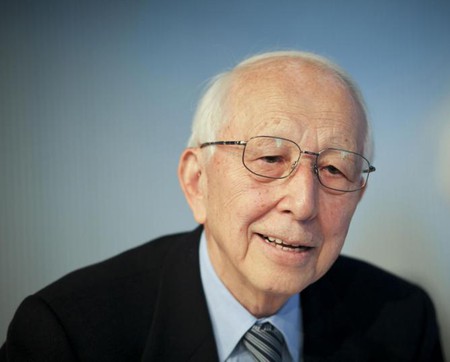 Maki is outspoken in voicing his powerful professional philosophy, refined over a six-decade career. For him, the beauty of the architect’s craft lies in small details that equip spaces for the people who use them, and in providing perfectly for human interactions inside. To this end Maki insists on designing ‘from the inside out,’ lest an externally striking building end up what he derides as a ‘dated camembert,’ attractive only from the outside. A leading critic of Zaha Hadid’s controversial design for Tokyo’s 2020 Olympic stadium, Maki opposes not its stark modernism (Maki is himself a zealous Modernist), but what he sees as a lack of cohesion between the design and the existing fabric of the Tokyo metropolis.

Maki has produced work throughout his native Japan, including the Tokyo Metropolitan Gymnasium, the TV Asahi Building and the Austrian and Danish embassies. While most modern Japanese buildings have an expected lifespan of around three decades, Maki’s work is meant to last. His timeless, clean-lines aesthetics and use of durable materials ensure his creations will have a place in the Japanese cityscape for a long time. Maki has found global renown in addition to his successes at home. A quick glance at just a few of his recent pieces showcase the skills and philosophy of the man whose mantelpiece boasts both the Pritzker and the Praemium Imperiale, Japan’s highest architectural accolade.

Maki’s on-going project is China’s first museum of creative design, due for completion in 2016. Set to house a collaboration between London’s V&A Museum and developer China Merchants Group, the collection will exhibit the best of European design in China, and exhibit the best of Chinese design to an international audience. British Prime Minister David Cameron has praised the project as a triumph for Anglo-Chinese relations and cultural understanding. Maki will inject the values of openness, inclusion and environmental fusion into his striking building – consisting of three cantilevered structures extending from a podium – with a grand external staircase, garden terraces and a high, glazed atrium, all absorbing the oceanic scenery surrounding the building.

In this commission for the Bihar government, Maki is providing a new and improved home for some of the region’s most precious artifacts, including terracotta from Bodh Gaya, site of the Buddha’s Enlightenment and ancient Buddhist bronzes, in order better to educate both locals and visitors about the region’s contribution to culture and civilization in India and the world. Maki is filling the 13.9-acre site with a campus-style distribution of simple, flat-topped pyramidal structures that seem a minimalist reinterpretation of ancient subcontinental architecture. Exteriors rely on weathering steel – a material chosen for its durability and also as a visual tribute to the region’s ancient and continuing prowess in metallurgy.

Maki has a gift for creating spaces that exude a philosophy. For the Aga Khan Museum, the creation of a permanent home for Islamic art and artifacts from the last millennium, Maki has turned a theology into a dazzling concrete structure. He infuses even mundane necessities with subtle Islamic symbolism, including the star-shaped drain in the central courtyard, designed to prevent a build-up of Canadian snow. The entire structure, from skylights to stairways, features a recurring hexagonal motif, a traditional Islamic symbol used to depict Heaven. The effect of mashrabiya screens is achieved by textured glass and the clever use of sunlight. The structure incorporates a 360-degree auditorium, extensive galleries and educational facilities, and intends to promote mutual appreciation and understanding between Islam and Western cultures. The political situation today shows there can be few more important projects to which an architect of Maki’s standing can apply his gifts.