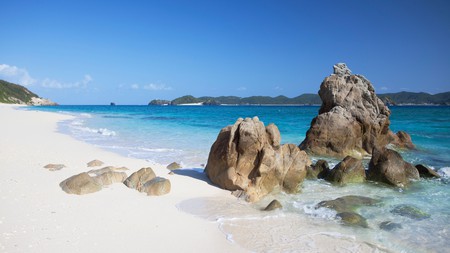 Okinawa’s pristine beaches, translucent turquoise waters and year-round warm weather make the island an increasingly popular destination for tourists. If you want to avoid the crowds and get a glimpse of the real Okinawa, here are the spots to head to.

A subtropical paradise with its own distinctive culture, Okinawa has a completely different vibe from mainland Japan. Once considered an off-the-beaten-path destination in itself, the island is now something of a hotspot for sunshine and relaxation. This means that many of the well-known beaches and attractions can get rather crowded, particularly during the peak summer months and Japanese national holidays.

While these sights are undoubtedly still worth visiting, there’s also a wealth of lesser-known locations where you can enjoy the best of what Okinawa has to offer with just a fraction of the crowds. Most of these places are located in the more sparsely populated northern part of the island, far from the hustle and bustle of the capital city Naha. Here are some recommendations for hidden spots you won’t want to miss.

Gaze out at the ocean from Hedo Misaki

Hedo Misaki – or Cape Hedo in English – is the northernmost tip of Okinawa, a craggy outcrop offering majestic views of both the East China Sea and the Pacific Ocean. There are some shops, cafés and other facilities here, but just moments from these you can find many areas of untouched natural beauty to explore – particularly along the eastern coast – as well as some shrines and monuments. These include an unusual statue with the head of a bird and body of a fish that celebrates the friendship between Kunigami Village (where Cape Hedo is) and the nearby island of Yoronjima, which lies in the neighbouring Kagoshima prefecture. A car is the easiest way to visit, but access by bus is also possible. 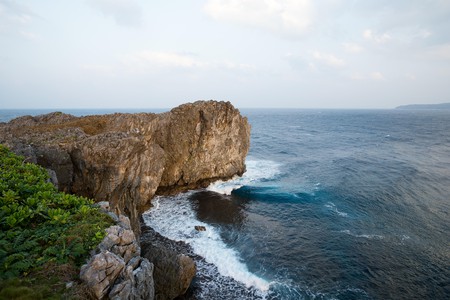 Part of the Yanbaru National Park in northern Okinawa, Daisekirinzan is an ancient limestone plateau that’s thought to be the oldest part of the island. There are four different walking trails in the national park that will let you explore the area’s primeval forest and rocky peaks. The easiest is a wheelchair-accessible boardwalk, while the other three involve a bit of climbing but nothing too strenuous. The Ocean View Trail offers a panoramic vista; the Subtropical Forest Trail takes you through dense groves of banyans and cycads; and the Wonder of Rocks path has plenty of interesting rock formations to admire. You can access the park by both bus and car. 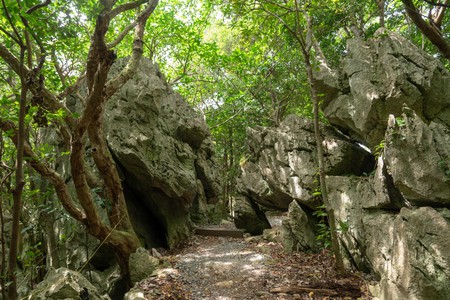 Just north of Okinawa’s popular Churaumi Aquarium you’ll find Bise, a quaint seaside village where time seems to stand still. Its narrow sandy streets are lined with lush fukugi trees, which create shady green tunnels that both ward off the heat and protect the village from typhoons. There are around 250 traditional homes here – some of which have recently been converted into cafés – with red-tiled roofs and shisa lion statues guarding the entrance. You can explore Bise on foot or by bicycle, just be courteous of residents’ privacy. There’s also a coastal walkway nearby with picturesque views out towards the nearby island of Iejima. 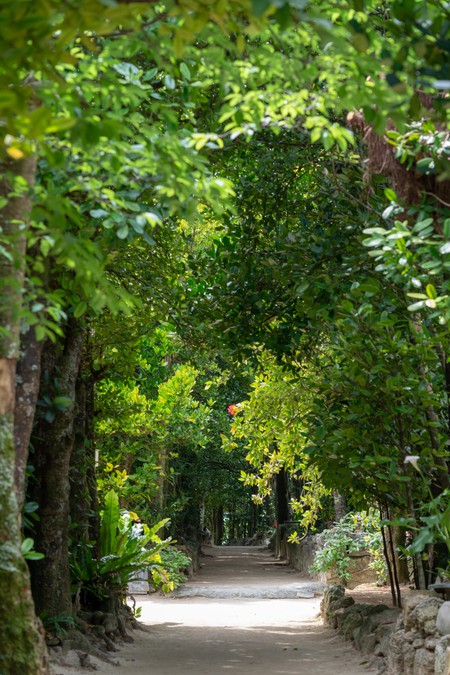 Hike out to Hiji Waterfall

At the end of a nature trail through the wilderness of northern Okinawa lies one of the island’s best-kept secrets. Hiji Waterfall is a spectacular 26m (85 ft)-tall cascade that tumbles over the rocks down to a tranquil pool surrounded by dense forest. The hike itself takes about 45 minutes each way, and includes an epic crossing over a suspension bridge that soars 17m (56ft) above the valley below. There’s a huge diversity of wildlife in this area, so keep an eye out for birds, lizards, snakes and even turtles as you go. The trailhead is accessible by car or bus. Be sure to wear decent walking shoes and bring plenty of water! 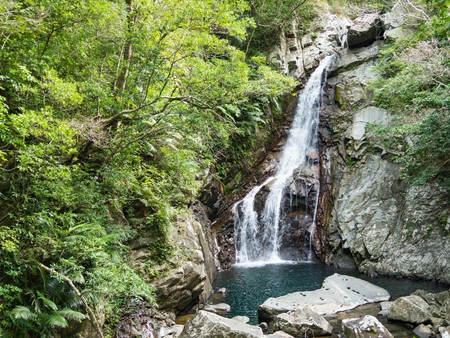 Lose yourself on Kumejima

A small island to the west of Okinawa, Kumejima is just a half-hour flight from Naha city. Despite being relatively easy to reach, Kumejima sees only a small number of tourists compared to the main island. It has serene beaches to explore, including the famous 7km (4.4 mile)-long Hatenohama sandbar, which is only accessible by boat. Kumejima also boasts hilltop castle ruins, rock pools home to colourful tropical fish and pleasant walking trails that meander past interesting rock formations. To really get away from it all, head to the secluded beach of Ara. The facilities are minimal, but you may well find you have the golden sands and sparkling azure waters all to yourself. 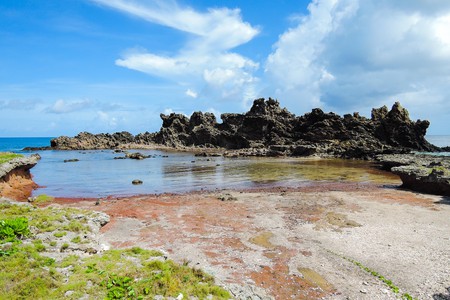 Connect with your spiritual side at Sefa-utaki

Hidden within a dense forest in the north of Okinawa, Sefa-utaki is the most sacred spot on the entire island. The site consists of a number of imposing rock formations linked by walking trails, with no manmade structures whatsoever. During Okinawa’s history as the independent Ryukyu Kingdom many important religious ceremonies and rituals were held here, including the inauguration of the highest-ranking priestess. There are six places of worship within Sefa-utaki, including a striking triangle-shaped passageway between two gigantic rocks, close to which a pot collects holy water dripping from two stalactites. Remember to be considerate of worshippers during your visit, as the site is still spiritually significant for local residents. 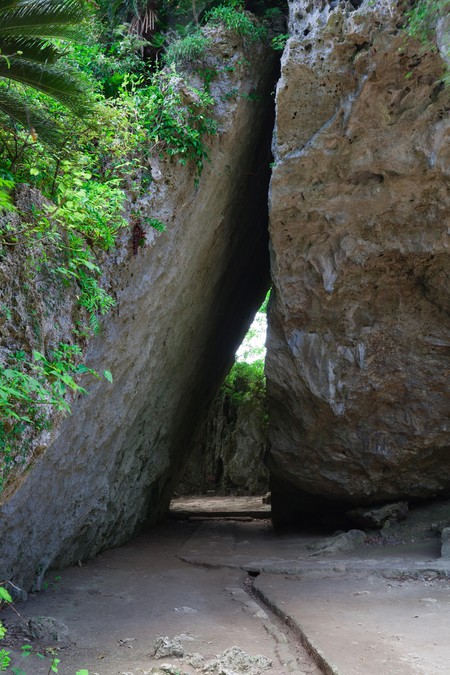 At 503m (1,650ft) tall, Mount Yonaha is the highest point on Okinawa island. Its slopes are covered in dense forest, and rare flora and fauna native to the prefecture. This does mean you don’t get much in the way of sweeping views along the way, however it’s still an enjoyable walk. The route itself isn’t too challenging; it takes between one to two-and-a-half hours to reach the summit depending on your level of fitness and how often you stop for breaks. You can undertake the hike at any time of year, although it can get uncomfortably hot and humid in the summer months. Just wear sensible shoes and bring enough water! 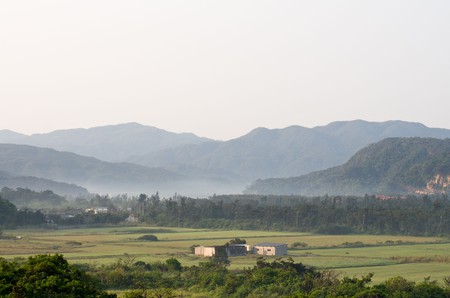 The slopes of Mount Yonaha are covered in dense forest, and rare flora and fauna native to the prefecture | © Silvia Groniewicz / Alamy Stock Photo

The Kerama Islands are a group of islands just 30km (18.6 miles) west of Okinawa. Their close proximity makes them a popular day trip location, especially for diving and snorkelling, however it’s possible to find some peaceful and secluded spots if you know where to look. The smaller, uninhabited isles such as Gahi, Agenashiku, Amuro, Geruma and Fukaji have beaches that are just as beautiful as those on the larger islands of Zamami and Tokashiki, just with far fewer people sharing them. The ocean all around the Kerama Islands is bursting with marine life, and the water is such a gorgeous colour that it has its own shade named after it: Kerama Blue. 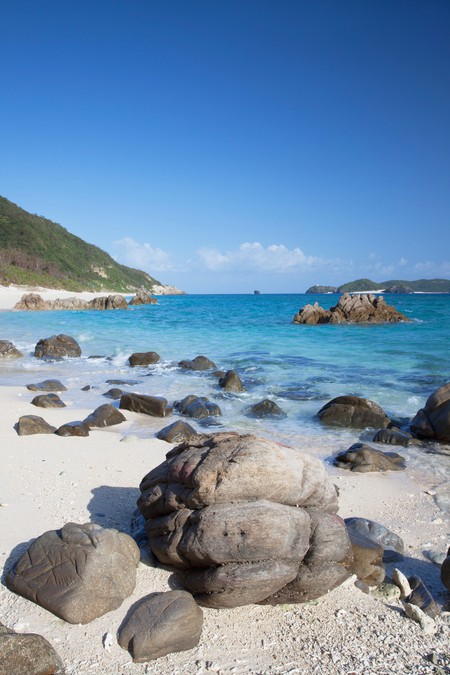