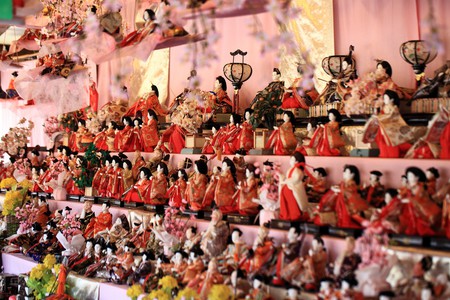 Every year on March 3rd, Japan celebrates the Hinamatsuri, or Doll Festival, by arranging hina ningyo (dolls) on a platform and praying for the health and happiness of young girls. The history of this tradition goes back over 1000 years, to the Heian Period.

During the Heian Period, an annual festival was held during which people prayed to the gods for good health and good fortune. As part of the festivities, straw dolls sitting in paper boats were floated away on rivers. It was thought that the dolls would carry any misfortune with them out to sea, acting as substitutes for their human makers. This tradition lives on in the Hinamatsuri, although today only a few shrines still hold a Doll Floating Festival and most people celebrate with ornamental hina dolls at home. 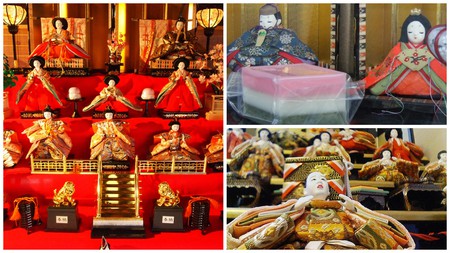 On the Hinamatsuri, dolls representing the Heian Imperial Court are arranged on a carpeted platform in a precise order. The Emperor and Empress sit at the top, with female attendants, musicians, advisors and samurai on the lower tiers. Spaces are left on the platform (hinadan) for traditional offerings like colorful arare (rice crackers), sake and hishi mochi. Hishi mochi are multilayered glutinous rice cakes, often sliced into diamond shapes before serving. Other foods people like to enjoy on this day are clams, which represent chastity, and chirashizushi (scattered sushi).

Setting out the hina dolls is good luck, but only families with young daughters need to observe this day. The hinadan and dolls are left up for around one month, starting in early February. Leaving them up past March 4th, the day after the festival, could hurt the daughter’s marriage prospects.