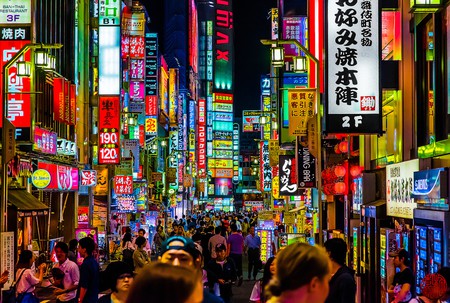 Have you ever wished you could have drinks with a Japanese adult magazine star? That was a rhetorical question – of course you have. Weekly Playboy magazine, better known as Shupure in Japanese, is turning the dreams of so many to reality. Last week the magazine opened its very own Shupure Bar in Tokyo’s seedy Kabukicho district to commemorate its 50th year in the smut business. We find out more.

First introduced in Japan in 1966, Weekly Playboy covers everything from news, interviews, comics, special interest articles and, of course, semi-nude photos of female models. Though not actually affiliated with the American Playboy magazine, it presumably attracts similar readership. In celebration of its 50th year running, Weekly Playboy is giving its readers – and anyone else of legal drinking age – a chance to dine and drink with some of the magazine’s most popular models.

A seat at the bar costs 10,000 yen (about $90) and requires a reservation made well in advance for up to five people. The price includes a four-course meal – served by the models themselves – with a time limit of one hour to dine.

Shot the 50 years Anniversary cover story for Playboy Japan. Half a decade.Honored! #weeklyplayboy#50thanniversaryissue#fuminikaido#二階堂ふみ

During the meal, diners will have a chance to drink and chat with the featured model of the evening. Pictures are not allowed, though the models will snap a Polaroid with customers on their way out. As the models are presumably not professional mixologists the bar features only Suntory Strong Zero canned drinks, which are quite sweet but pack a punch at 9% ABV. Drinks are ordered separately. Additional food such as fried chicken and tuna sashimi can be purchased, though we suspect customers will be coming for reasons other than food.