Universe of Water Particles on a Rock where People Gather | © teamLab

Japan’s enigmatic art collective teamLab has been making waves with the launch of the world’s first-ever permanent digital art museum in Odaiba, Tokyo. Officially titled MORI Building DIGITAL ART MUSEUM: teamLab Borderless, or Digital Art Museum for short, it’s a constantly evolving world of tech, art and endless Instagram fodder. If you have even a vague interest in Japan’s tech and art scenes, it’s well worth a visit.

For the uninitiated, teamLab is a 400-strong group of artists, engineers, designers, CG animators, mathematicians and other professionals who come together to challenge the concepts of what art can be. 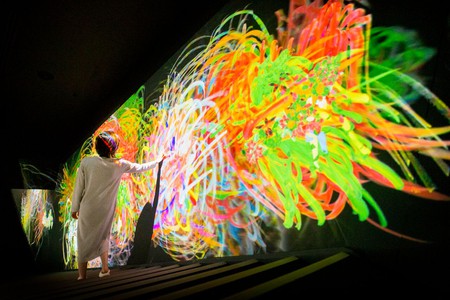 Since 2001, the enigmatic collective has been winning over fans and art critics around the world with its groundbreaking and immersive multi-dimensional artworks. None of teamLab’s members are ever cited in the works as teamLab’s primary focus is collaboration over individual recognition.

In March 2017, Culture Trip spoke with the founder of teamLab, Toshiyuki Inoko, during the group’s immersive London exhibition Transcending Boundaries. Since then, the collective has built countless other unique works, including turning an entire Japanese park into a digital gallery and crafting the vibrant digital installation for the Gallery Children’s Biennale at the National Gallery Singapore. 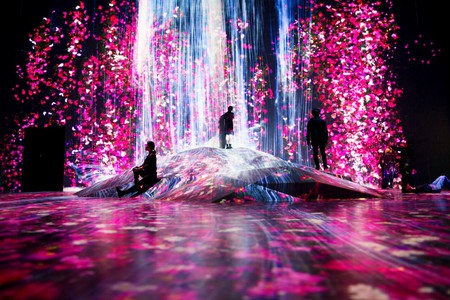 Universe of Water Particles on a Rock where People Gather | © teamLab

The purpose behind the museum

The decision to open this new museum came from the fact that the collective had yet to find a major gallery space strictly dedicated to the growing world of digital art. Though Berlin is home to a Digital Art Museum, it is predominantly online, with only a small brick and mortar space located in the Mitte district.

As a teamLab spokesperson told Quartzy, the primary motive behind the exhibits is to create a fully immersive space free of traditional boundaries. They want to “tear down the borders between ‘one art and another,’ ‘art and visitors’ and ‘oneself and others’ by allowing visitors to melt into the art and become part of it”. 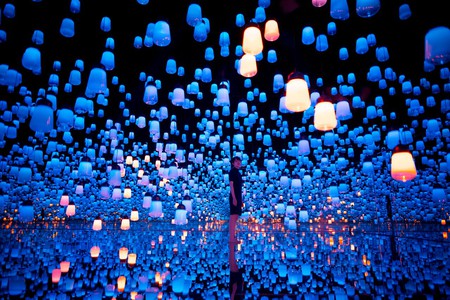 The museum is a labyrinthian network of exhibits laid out like a maze with minimal direction apart from the occasional arrow. Staying true to the idea of being ‘borderless’, some of the projection exhibits escape their designated spaces, making their way along the walls of other rooms.

In total, the museum is broken into five separate sections: Borderless World, Athletics Forest, Future Park, Forest of Lamps and the En Tea House. But within some of these different sections are mini displays in themselves. If there’s a clear, structured way you typically like to explore a museum, be prepared to throw it out the window.

Also, do try and eat first because there’s a high chance you’ll be exploring the museum for a number of hours and there are no places to eat once you’re inside. There are drink vending machines, though (of course, it is Japan). If you want to try the digital wonders of En Tea House, a cup of digitally enhanced tea will set you back 500 yen. 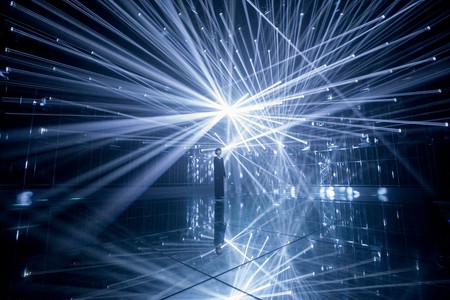 Regarding what to wear, there are no hard and fast rules, however, there are a couple of little suggestions that will definitely ensure you have the most immersive time. If you’re planning to take lots of selfies, wear light coloured clothing on which the projections can best be seen.

Wear flat, preferably soft-rubber soled, shoes. Some of the rooms have delicate or mirrored flooring so high heels, and other shoes with pointed, hard soles may hinder the experience. There are rental shoe stations available, but if borrowing a pair of communal shoes isn’t really your style, it’s best to plan ahead.

In relation to the aforementioned mirrored floors, wear pants when visiting the gallery to avoid flashing a little too much. The lighting is often dark, but it doesn’t mean it’s impossible to see. For some exhibits, there are free pants you can pop on underneath. 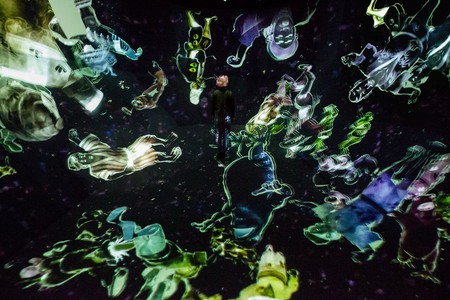 For those travelling via public transport, the best way to get to the museum is via Tokyo Teleport Station, which is served by the Rinkai Line.

At first, Odaiba seems like an unlikely place for an art gallery, considering it’s a human-made island filled to the brim with flashy entertainment outlets and mega-sized shopping stores. However, once you look at teamLab’s modus operandi – combining the natural world with tech-driven innovation – this futuristic inlet is the perfect location. 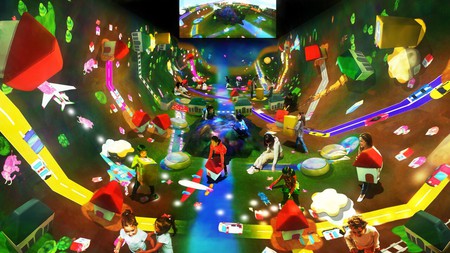 Located in Odaiba’s already established Palette Town complex, the museum was created in collaboration with the Mori Building Company, the team behind many of Tokyo’s other iconic sites including Omotesando Hills, Roppongi Hills and the Mori Art Museum. The museum is open from 10am until 7pm from Monday through Thursday and on Sundays and national holidays. On Fridays, Saturdays and the evening before holidays, the museum stays open until 9pm. It is closed every second and fourth Tuesday. Pace Gallery represents teamLab. 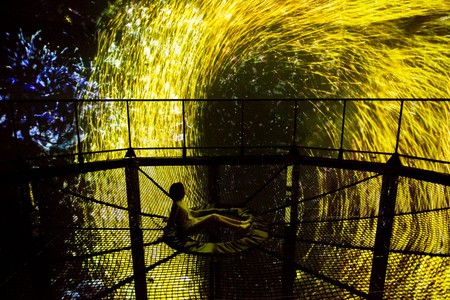 A groundbreaking mix of tech, art and design, this is teamLab’s first ever permanent gallery located in the heart of Odaiba.