Although symbols of luck and good fortune abound in Japan, few can match the popularity of Daruma dolls: papier-mâché figures believed to lead their owners toward success. Darumas, shaped like Bodhidharma and produced around Takasaki in Gunma Prefecture, are an important part of New Year celebrations in Japan, and a deep-rooted Japanese tradition. Jeni Allison explores the symbolism behind them, as well as their artistic, cultural, and spiritual significance. 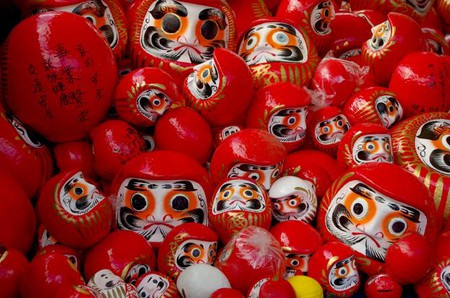 Gunma Prefecture sits around an hour and a half north of Tokyo, with a climate characterized by strong winds and generally dry conditions. This climate is perfect for the manufacture of the papier-mâché Daruma dolls for which the area’s biggest city, Takasaki, is most famous.

Though the roly-poly shape of Japan’s Daruma dolls appears jolly at first, this shape—one that has gone through numerous incarnations—is more robust than jovial. The doll is designed to get back up when it falls, embodying the essence of the famous Japanese proverb—fall down seven times and stand up eight. Thanks to this symbolism, the Daruma is commonly regarded in Japanese society as both a good-luck charm and a constant reminder of one’s goals.

The practice of making Daruma dolls in Takasaki can be traced back to 1783, when a famine hit the area. A priest at Shorinzan Daruma-ji, the local temple, taught local farmers to make the dolls so they would have something to sell during times of economic hardship. Combined with the society’s faith in—and need for—good-luck charms, these dolls became incredibly popular all over Japan, with manufacturers in Takasaki now producing the vast majority of Japanese Daruma. 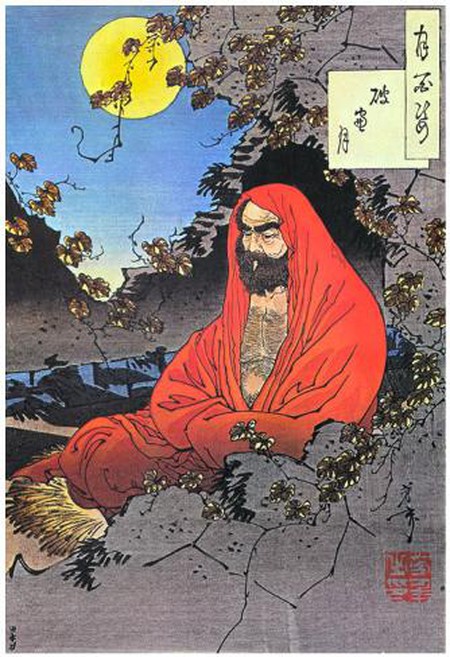 But Darumas are by no means token talismans. Highly personalized and packed with symbolism, they borrow their shape from Bodhidharma, who is understood to have brought Zen Buddhism to China and subsequently Japan. Legend states that Bodhidharma’s robes were red, which is why the traditional Daruma dolls are painted in bright red. Bodhidharma spent so many years in meditation that his arms and legs withered away – this also explains the limbless shape of the Daruma. When purchasing a Daruma, many look to the quality of its painted face, as the finest faces are often the fastest sellers. The Daruma’s eyebrows are represented as cranes, and their moustaches by turtles; as the two animals traditionally lead long lives, the face of the Daruma is one of its more auspicious features.

Using a Daruma doll is simple. After New Year, one eye must be painted onto the Daruma (they are always sold without the eyes painted on). The Daruma is then assigned a specific wish or goal, and left somewhere visible at home or in the workplace. Every time its owners see the Daruma, they will be reminded of their goal, and so will focus on it. Once that goal is achieved, the second eye is painted in, the wish written on the back and the doll returned to the temple for burning. At this point, another Daruma can be bought for next year, and the cycle is repeated.

Darumas are popular with everyone, from tourists to housewives and politicians; the latter use them as good-luck charms in the run-up to elections and in government campaigns. Like the rest of Daruma owners, they color in one eye, make a wish, and if they win the election, they color in the other eye. 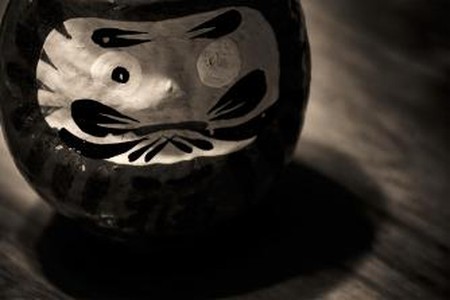 In Japan, New Year customs and celebrations extend into January; whole families attend local shrines for Hatsumōde, or the first visit to the shrine that year, particularly during the three days of January. A ritual that accompanies these visits involves the renewal of good luck for the upcoming year: traditionally, people buy new good-luck charms, pray for a successful year and return last year’s charms for burning at a special ceremony, the Daruma Kuyo.

In Takasaki, however, there is another important visit to make on 6 January.

That day sees Takasaki hatsumōde’s Syorinzan Daruma-ji temple host its annual Daruma-ichi, or Daruma fair, where thousands of people flock to the temple to buy new Daruma dolls, have them blessed, and return their old dolls for ritual burning. The fair is full of typically Japanese entertainment—food and candy stalls, toys and games, but also vendors—mostly local farming families who have been making Darumas for hundreds of years. The variety they produce is incredible: from tiny dolls that fit in a pocket to massive ones that need to be lugged home on a shoulder, the Darumas come in one shape, but all sizes. And size matters here—typically, believers should start their collection with a small Daruma, and gradually move toward the bigger ones as their wishes come true. 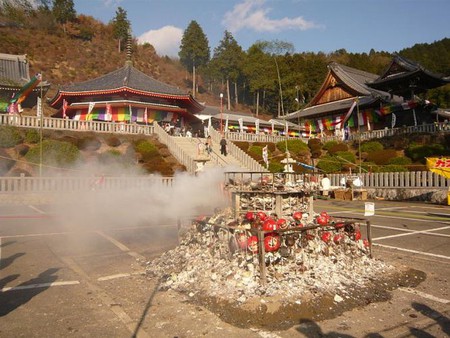 Colors vary just as much as size does; although the Daruma’s traditional color has always been red, enterprising manufactures have started producing other colors too—purple for health, yellow for security, gold for wealth, and white for love. However, many local vendors insist this is nothing more than a commercial gimmick, and that the red Daruma (for luck and good fortune) will work for any wish.

After the Daruma is purchased from a vendor, a more spiritual ceremony can begin. A local priest will perform kaigen, a blessing ritual whereby the doll—and the wish attached to it—are consecrated, and the first eye is painted in. It is said that this process gives the Daruma its soul; it also gives the doll an official status, with a sticker certifying that it has been blessed. Kaigen comes at an extra charge, of course.

But many people don’t count their pennies when counting on their luck. Good fortune plays a leading role in Japanese New Year celebrations, after all. Omikuji, an oracle or prophecy written on paper strips, can be purchased at the temple in addition to the Daruma. Picked entirely by chance, the omikuji reveals a number corresponding to a numbered drawer in the temple; after it is picked, a priest will reveal the fortune behind it. And fortunes vary—in Japan, there are 13 types of luck stretching beyond the black-and-white categories of good or bad. With a bit of interpretation, an appropriate conclusion can be reached. If the revealed fortune is good, the omikuji is taken home; however, if it predicts bad luck, the omikuji is tied to a tree or structure at the temple in the hope the prophecy doesn’t come true.

After all, that is what the Daruma doll is there for.