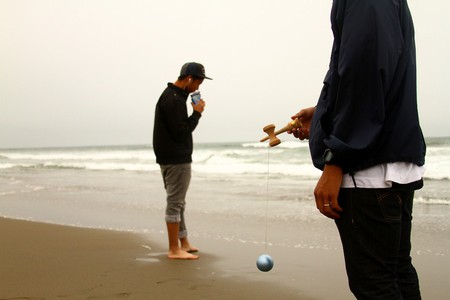 Most people may remember buying a game as kids that involved a wooden cup with a ball attached to it by a string. The novelty of practicing hand-eye coordination enough to master the game lasted about a day or two before the game was set aside, lost under the bed and forgotten. Well, in Japan, a country that really marches to the beat of its own drum and has its share of weird sports, this ball in a cup game is still a really big deal.

Known as kendama, which translates to “sword [and] ball,” this game is such a big deal, the country hosts regular international championships, and they’re pretty serious. It’s said that the country’s love for this game can be traced back to the late seventeenth or early eighteenth century, when Japan’s ports were open to international trade.

Slightly different from the classic ball in a cup, kendama has three cups (including one at the bottom of the handle) and a spike, all of which can be used to catch the ball. To make it even more interesting, it incorporates elements of other sports and skill sets, including yo-yo, juggling and dance.

During the 2000s, the popularity of kendama reached many other corners of the globe and found a passionate fan base in North America and Europe. Since 1979 the official Japanese Kendama Association has held kendama contests, and organisations like GLOKEN (the Global Kendama Network) have tirelessly worked to promote the art of kendama around the world through meet ups and tournaments.

The sport is so popular that many foreigners, who master the skills, actually lead a rather successful double life as unassuming citizens back home and kendama champions here in Japan. Take for example Bonz Atron, a 20-something-year-old American, who has built a pretty impressive sporting career with his ball and cup skills.

If you want to test your skill level, the Kendama Association has a ranking system for enthusiasts to mark their progress; the lowest level is whipping the ball up into the largest cup. If you can master that, then nice work, you’re on the way to being a number one kendama champion!