How to Celebrate National Foundation Day in Japan 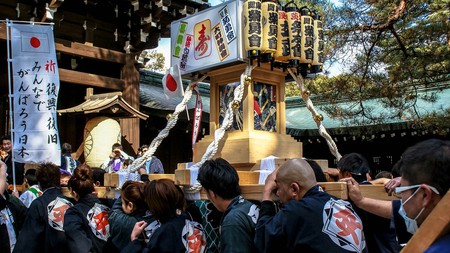 In Japan, February 11th marks National Foundation Day. Like Independence Day in the United States or Australia Day in Australia, it’s the country’s nationwide day of national celebration of patriotism and a much-appreciated public holiday.

Unlike its Western neighbours, however, the country’s celebrations are a lot more subdued in a mainstream sense. Still, there are some events in Tokyo and wider Japan that you can attend to pay your respects.

Firstly, it’s important to know at least a brief history of the day to truly appreciate what it’s about. Known in Japanese as Kenkoku Kinen no Hi, or sometimes referred to as Empire Day, the day recognises the ascension of Jimmu, the first Emperor of Japan, to the throne, which happened in 660 BC. Over the years, the calendar date of the event has been moved around a little. Originally, the day was celebrated during the New Year, but during the Meiji Period, as the country switched from the Chinese lunisolar calendar to the Gregorian calendar, the day jumped to February 11th.

If you’re in Tokyo, head down to Omotesando Dori in the crisp early hours of the morning to be part of the National Foundation Day parade. Here you can watch patriots waving flags and carrying mikoshi, known in English as portable shrines, to the nearby Meiji Jingu Shrine.

Follow the procession to Meiji Jingu Shrine, located just near the famous Yoyogi Park in Harajuku. Each year on February 11th, this shrine and many other Shinto shrines across the country host a National Foundation Day celebration known as Kigensai. One of Meiji Shrine’s biggest festivals, the Kigensai here features a few thousand parade participants carrying mikoshi to the grounds as tens of thousands of spectators watch.

Located a few kilometres away in Chiyoda, the Imperial Palace, home to the current Emperor, also hosts a celebration. The day draws spectators from across Tokyo and wider Japan, all coming to pay their respects to the nation’s leader and remember the history of the nation.

Those who are feeling super adventurous can visit Kashihara Shrine in Nara Prefecture. It’s said that this shrine, built in 1889, sits on the site where Jimmu became Emperor on February 11, 660 BC. It’s also near the supposed location of Jimmu’s tomb. Here you’ll see parades and processions dedicated to celebrating Japan’s national pride. It’s best to be respectful and cautious though, as the event here supposedly draws a lot of Uyoku dantai, who are Japanese ultranationalist far-right identifiers.