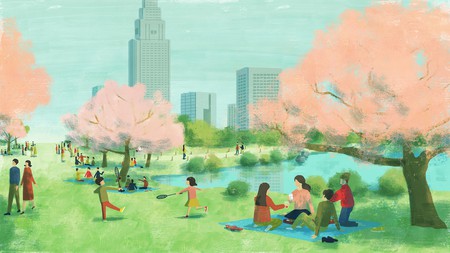 The fleeting beauty of Japan’s cherry blossoms is renowned the world over. From afar, hanami parties can look like an evocative glimpse of the country’s culture of mono no aware (appreciating impermanence). But what’s it like when hanami is just part of your annual routine?

Cherry-blossom season in Japan is the picture-book image of springtime. As the longer sunny days thaw away the remnants of winter, and the soft pink sakura (cherry blossom) flowers start to bloom, the air is thick with pollen and anticipation. For many Japanese, the arrival of April is also the start of the new work and school year, which only enhances the season’s atmosphere of fresh hope and new beginnings.

Hanami parties are a big part of the season. The term hanami (花見) literally translates to ‘flower’ (hana) ‘viewing’ (mi). Hanami is much more than just admiring flowers, though: it’s a celebration of newness, but it’s also transience.

While the season is extraordinarily beautiful, it is, naturally, enmeshed with everyday life in Japan. Many workplaces have their own hanami, for instance. They’re taken very seriously, almost the Japanese equivalent of the office Christmas shindig. Junior employees are tasked with the undesirable duty of securing a picnic spot for their office hanami, which can involve setting up before 6am. There are even companies that offer picnic-spot-reserving services.

To get a feel for the reality as well as the romance of hanami season, Culture Trip spoke to three Tokyo locals about their experiences as hanami reservers, and what this time of year means to them. If you thought it was all misty-eyed park strolls, impromptu picnics and nostalgia-heavy appreciation for the transient beauty of the blossom, then you only know the half of it. Here, in the words of these three locals… hanami season.

This year, I had to reserve a spot for my rugby team’s annual hanami party. It’s one of my designated roles as the events coordinator/chairman for my rugby club.

We set up on the south side of Yoyogi Park in Harajuku. The players on the rugby team are based all over Tokyo, and Yoyogi Park is the most central location. I arrived at 7am, which is a lot later than usual, but I’d been a bit naughty and got someone else from the club to arrive there at 6am for me. By the time I turned up, most of the good spots were taken already.

Personally, I think watching the day go past as a ‘picnic spot reserver’ during hanami season is a pretty unique and fascinating experience. You get to watch the park transform from a large, empty space, covered in blue picnic tarpaulins, to a jam-packed party park by noon.

One thing people don’t know is that you’re not allowed to sleep while you reserve a spot: the park guards who roam around will come and wake you up. Some reservers do just chill while they’re waiting; others start drinking, though. I’m going to be honest: I start drinking from the moment I get there.

I love hanami season because it’s a great atmosphere to be in. Everyone’s socialising, and all the sakura in the background is so beautiful. For me personally, it’s also a chance to experiment with food. I used to be a chef so I love preparing food for everyone.

Hanami is the only time when you’ll be able to see properly organised chaos – and of course a beautiful array of sakura and people unwinding and letting go. It’s the best time of year. 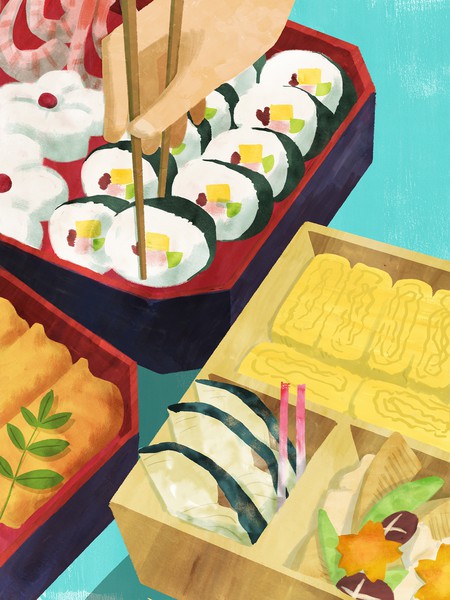 I’m a hairstylist. I work freelance now, but two years ago I went to reserve the hanami spot for my previous salon. It’s not that our salon had a senpai-kohai hierarchy system; I think I was just relegated to the duty because I didn’t have an appointment.

The salon assistant came with me, too. Our party was going to be on a Monday night in the park around Yasukuni Shrine, once the salon had shut, so we got there around 2pm or 3pm to save a spot. The area around Yasukuni is a great cherry-blossom spot. It has a lot of food stalls – yakitori stands and the like – so it feels like a festival almost. Once we got to the site, we had to hunt out an available spot that was covered in sakura – that’s super important.

There are interesting dynamics in the hanami party world. The behind-the-scenes politics in some offices contrasts with the breezy, laid-back and ‘in the moment’ ethos of the hanami season. Up until quite recently, a lot of office workers would feel like they were forced to drink during this season. There used to be a common game we called ‘iki, iki, iki’ (drink, drink, drink). My company didn’t have the game, though, because I can’t drink alcohol – it makes me ill – and some of my co-workers and bosses don’t drink either.

If you’re a newer recruit to a company or considered lower in the pecking order, hanami party season can actually be quite stressful. You’re expected to be the one serving the more superior employees drinks. You’re also the one who has to set up, and go and get more ice. If it’s a ‘black company’ (a company known for not treating employees well), I don’t think you can sit and relax; you have a lot to do and stuff.

Not all hanami events are as structured as the one I was a part of. Hanami can be different for so many people. I live near a major Tokyo park, so often I’ll just go and pop by there because there’s always a friend there hanging out.

It’s around the same time students are graduating, and the start of a new year, so there’s a feeling of hope and fresh starts tangled up with hanami season. Given that so many people in Tokyo live alone, and don’t often have events in their homes, it’s also in many ways the time of year when new friendships blossom. The city’s parks become like a communal backyard, where people invite their wider circle of friends, and everyone meets one another, like a big social mixer. 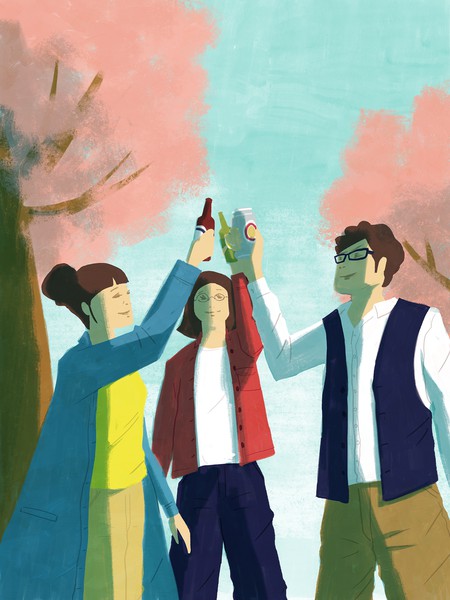 Employee at an international company

I work for a large international company, but my team is a group of just 25 to 28, so we’re all like good friends. Hanami for us wasn’t meant to be a corporate obligation – just a fun thing to do on the weekend.

I’m a really chill person. I’m happy to play situations by ear. But there’s a girl in our team who works for a big, ultra-conservative Japanese agency with hierarchy. She’s been working with us for an upcoming project for a long time. It was she who decided that we were going to do a work hanami event at Yoyogi Park in Harajuku.

Living close by Yoyogi Park, I know it gets crowded, so I said I could save the spot. I’m also the youngest one in the team so maybe I felt obligated to go early. My co-worker told me, ‘Kaoru, you’re going at 6am.’ I said it was too early, so she responded, ‘OK, 7am.’ That was it then.

Our hanami was on Saturday, so on Thursday night she started planning everything, telling me ‘We have to order drinks’. I suggested everyone BYOB, but she insisted on preparing it all. You can order alcohol through a company that will deliver it out front of the park on the day.

On the day of the event, myself and my co-worker who organised it all picked up all the boxes of beers and walked around the park. We found a good spot right by the fountain in the middle of the park. I’d say the place was 10 percent full when we got there. I brought my pillow and down jacket and passed out, exhausted because I’d been out the night before. My co-worker just started watching Netflix.

We’d pre-ordered food, which arrived at 9.30am. It was boxes and boxes of french fries and hamburgers. My co-worker wanted to set up all the food nicely, opening the sandwiches and salad and lining it up like it was on display. I think she was taught to do that at her previous company.

Then we just sat there looking at the food for two hours until everyone turned up. Once the party kicked off, it ran for exactly two hours as scheduled, and by 2pm the co-worker who set up with me encouraged everyone to clean up.

The whole experience is a good analogy for the blossoms, I guess. The anticipation and buildup always run way longer than the actual moment, and before you know it, it’s all done for another year.

I do love hanami season though. It is a great excuse to get out in the sun, catch up with friends and party. 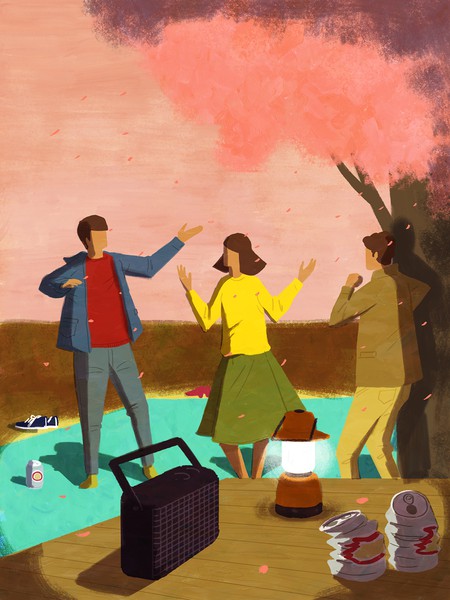