Best Places to Stay in Tokyo for Food Lovers 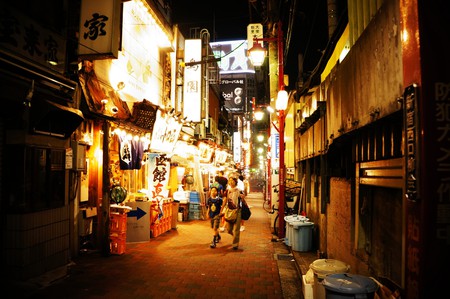 Saying that Tokyo is a foodie’s paradise is an understatement – from exclusive Michelin-starred establishments to the best ramen you’ll ever taste for under $5, the city has it all. Keen foodies will notice that many pockets of the city cater to very specialist niches. Here’s everything you need to know.

Market
Facebook
Email
Twitter
Pinterest
Copy link
Share
Map View
Technically located within the Shinjuku ward and only one stop away from the labyrinth that is Shinjuku station, this bustling yet cozy little suburb feels worlds away from Tokyo. Often referred to as ‘little Korea’, Shin-Okubo is the home of a large portion of Tokyo’s Korean stores, and of course restaurants.

Home to arguably the best Korean food outside of the country itself, the area has everything from Korean BBQ to bibimbap and everything in between. It’s impossible to pick a number one place here as competition is tight and restaurants continue to up the ante every single week, but to try a bit of everything you can’t go past Delicaondoru (でりかおんどる) a local establishment with over 160 items on the menu.
Open In Google Maps
Tokyo, Japan
Give us feedback

Ginza: the highest of high-end dining

Store
Facebook
Email
Twitter
Pinterest
Copy link
Share
Map View
If there was one suburb that was the epitome of Tokyo’s ‘work hard, play hard’ culture, it would be Ginza. This luxury-loving suburb is all business by day and all pleasure by night, and is home to some of the city most famous Michelin-starred restaurants. Not to be defined by one particular cuisine, the options are diverse, however they’re all the best of the best. For the ultimate Ginza experience you can’t go past Bulgari Tokyo Restaurant, a restaurant based on the architectural designs of the Bulgari restaurant in Milan, with a unique Japanese twist.
Open In Google Maps
12 7, 2-chōme, Ginza Chuo City, Tokyo, 104-0061, Japan
+81363620111
Visit Website
Give us feedback

Walking down Harajuku’s main street Takeshita Dori you’d swear you’d stepped into the alternate version of Willy Wonka’s Chocolate Factory. With its manic fast-paced energy and multi-coloured décor, the street practically runs on sugar. If you’re chasing crepes filled with cheesecake you can find an outlet on every corner. If you’re hungry for candy floss as big as your torso, pop by Totti Candy Factory. If multi-coloured strands of spaghetti or chocolate chicken tickle your fancy, make your way to the Kawaii Monster Café. No matter how crazy your sweet tooth you’ll be sure to satisfy your cravings here.

Arguably the busiest pocket of one of the busiest cities in the world, if you’re hanging around Shinjuku you’ve got to be comfortable becoming a human tetris block ready to squeeze into any nook available. When it comes to eating and drinking establishments, making the most of a minimal space is an art form that Shinjuku-based bar and restaurant owners have down pat. To see the impossible be done check out the area’s two main drinking and dining laneways, Omoide Yokocho (aka Memory lane aka Piss Alley) and Golden Gai.

Market, Restaurant, Sushi, $$$
Facebook
Email
Twitter
Pinterest
Copy link
Share
Map View
Located not too far from the ritzy streets of Ginza sits Tsukiji, a pocket of Tokyo famous for its booming fish market. Here under the one roof hundreds of merchants work tirelessly handling over 2,000 tons of marine products every single day. Arguably most famous for its somewhat exclusive 3am morning fish market, the area also unsurprisingly produces some of the city’s best sushi. Try Kagura a quiet restaurant hidden in the back of the outer market for their renowned for aburi sushi, sushi featuring toppings that have been seared and grilled.
Open In Google Maps
14-13 4, 4-chōme, Tsukiji Chuo City, Tokyo, 104-0045, Japan
+81335414180
Visit Website
Give us feedback

Market
Facebook
Email
Twitter
Pinterest
Copy link
Share
Map View
There’s only one place in Tokyo you need to visit to fulfill all your ultimate chef fantasies and it’s Kappabashi Street located between Ueno and Asakusa. Overflowing with all things kitchen-related, the stores on this busy street specialise in everything from dishes, pots, and pans to furniture, chopsticks and signs. However the area’s most fascinating draw card is the cluster of stores that sell fake wax models of food often used by restaurant owners to lure in customers. Freakishly realistic, these fake plates are handcrafted by meticulous craftsmen whose works are essentially the ultimate optical illusion.
Open In Google Maps
Tokyo, Japan
Give us feedback
Give us feedback