Baseball and Cherry Blossoms, These Are the Best Things To Do in Fukuoka 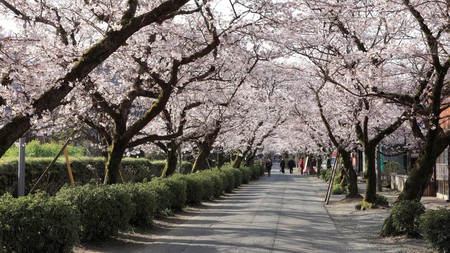 Kyūshū – the south-western bookend of Japan’s four major islands – is a sun-kissed cocktail of volcanic peaks, golden coastline, historic sites and charming cities. Fukuoka, Kyūshū’s biggest city, is the gateway to the island, and a compulsory stop before racing off to Kumamoto Castle, Mount Aso and Nagasaki.

Originally two towns on either side of the Naka River – the castle city of Fukuoka in the west, and the trading port of Hakata in the east – Fukuoka merged to become one in 1889. What emerged was a modern, inviting, cosmopolitan city – Fukuoka is closer to both Shanghai and Seoul than Tokyo, after all. Rather than boasting a bulging itinerary of big-name attractions, Fukuoka is one of those towns that always pops up on those ‘world’s most liveable cities’ lists thanks to its warm climate, lush public spaces and colourful cultural scene, which comes alive every evening when the yatai food stalls start cooking. From baseball to cherry blossoms, find out the 10 best things to do in Fukuoka, Japan.

Stroll over an old moat at Ōhori Park

The word ‘Ōhori’ means moat in Japanese, because that’s precisely what the pond at the heart of this park used to be: the moat that guarded the entrance to Fukuoka Castle just next door. Since the 1920s, though, the water has formed the centrepiece of a park ringed by a 2km (1.25 mile) running track and decorated with man-made islands linked by elegant bridges. As well as the castle ruins next door in Maizuru Park, Ōhori Park also neighbours a classical garden that costs a small fee to enter, plus the Fukuoka Art Museum, which houses everything from 11th-century Buddhist statues to Salvador Dali masterpieces. 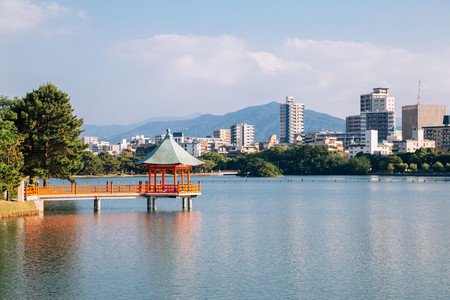 When Fukuoka Castle was built in the 17th century, it was the biggest fortress on Kyūshū. But it couldn’t survive the Meiji revolution, which scrubbed Japan of its feudal past two centuries later, and unlike so many Japanese castles around the country, was never rebuilt in recent decades. Today, all that remains are some crumbling turrets, walls, towers and gates dotted around Maizuru Park. But the main reason to visit is the countless cherry trees that blossom each spring, with walking paths and picnic lawns sprinkled beneath the blanket of blooming flowers. 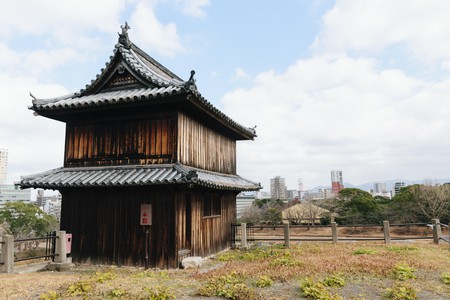 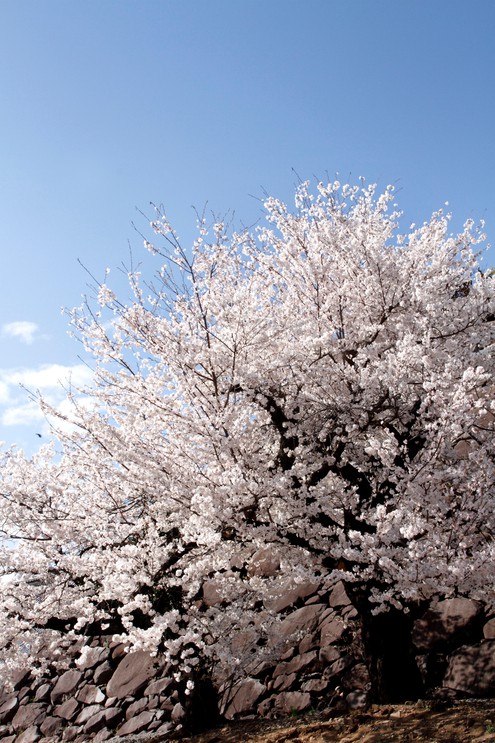 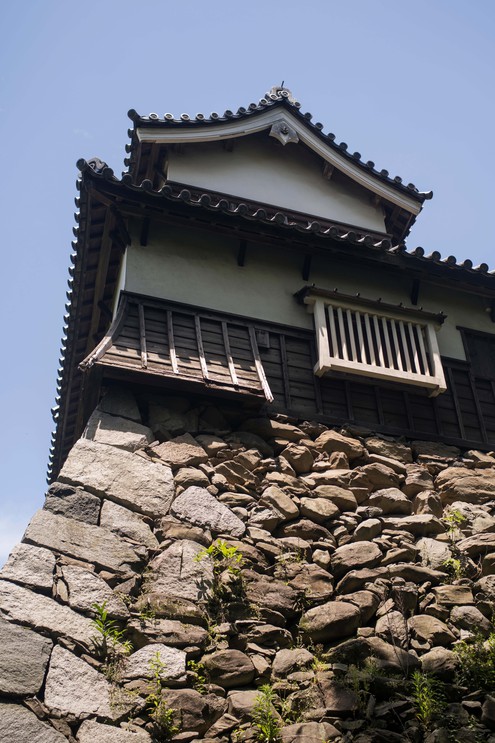 When the sun goes down, yatai wake up. More than 100 food stalls spring up around Fukuoka every evening at 6pm, serving crowd-pleasers like yakitori chicken skewers and gyoza fried dumplings alongside local specialties like Hakata-style ramen (thin noodles in a pork bone broth) and mentaiko (pollock roe). Grab one of the handful of stools at a stall, order a beer or a sake or a shōchū, and watch the chef get to work – yatai are a social affair, so be prepared for a chat with some new friends. Tenjin on the mainland and the southern end of Nakasu island in the middle of the river – Fukuoka’s nightlife precinct – are the liveliest street food hot spots. 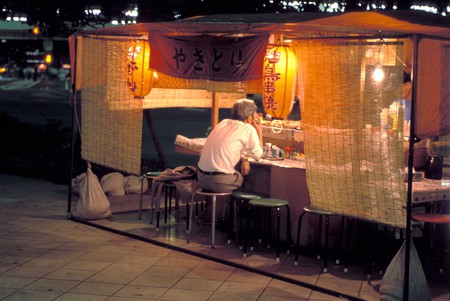 See the shrines of the old town

Fukuoka is a very modern city, but the Hakata Old Town – north-west of Hakata station, Fukuoka’s rail hub – is a time capsule of ancient temples. Beyond the Hakata Sennen-no Mon welcome gate lies the 8th-century Kushida shrine, the 9th-century Tōchō-ji with its mighty 10.8m (35ft)-tall wooden Buddha statue, and Shōfuku-ji, the oldest Zen temple in Japan, dating back to 1195 (visitors can’t go inside the buildings, but can admire them from the grounds outside). The Hakata Machiya Folk Museum reveals more about life here during the Meiji and Taisho periods, showing off arts and crafts in a period home. 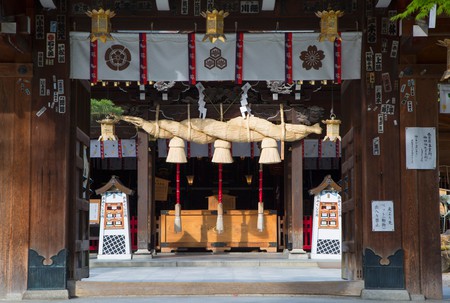 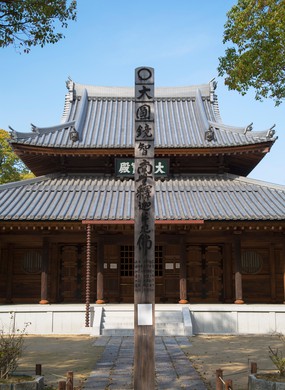 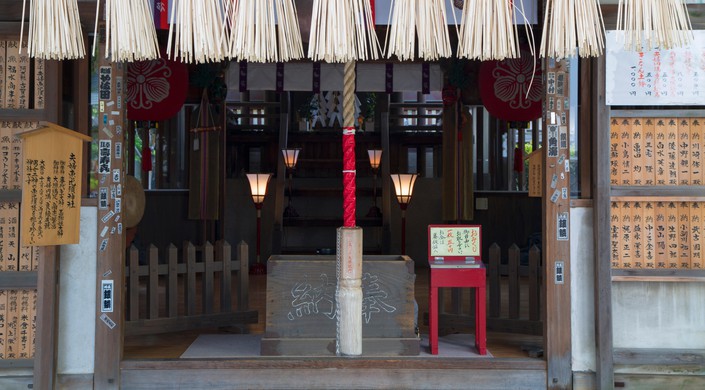 Canal City, on the other hand, feels like a glimpse into the future. Set around a 180m (590ft) canal just south of Nakasu, this mammoth complex is home to more than 250 shops, cafés, restaurants, theatres, cinemas and hotels across five storeys. The dazzling water fountain display every half-hour between 10am and 10pm and the so-called Ramen Stadium on the fifth floor are not to be missed. Across the river, Tenjin Chikagai Underground Shopping Mall (known as ‘tenchika’, for short) houses 150 retailers beneath the streets with direct access to several subway shops, while Marinoa City Fukuoka is as famous for its 120m (394f)-tall ferris wheel as much as its outlet mall. 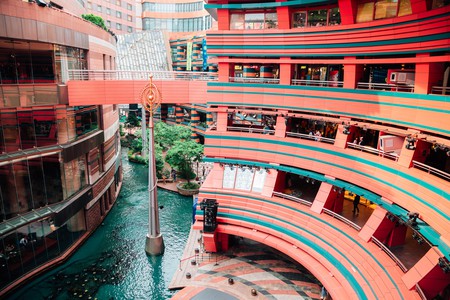 The modern waterfront is another contemporary chapter of Fukuoka, written in 1989 for the 100th anniversary of the city. West of Ōhori Park and north of the Fujisaki and Nishijin subway stations, much of Momochi was built on reclaimed land, making room for futuristic buildings, leafy parks and wide, organised streets. Swimmers head to the sheltered sand of Momochihama for a dip. Shoppers stroll around Marizon, a man-made island covered in shops and eateries. History buffs get their fill at the Fukuoka City Museum. And everyone gazes up at the sparkly 234m (768ft)-tall Fukuoka Tower, whose 123m (404ft)-high observation deck takes in panoramic views of Fukuoka. 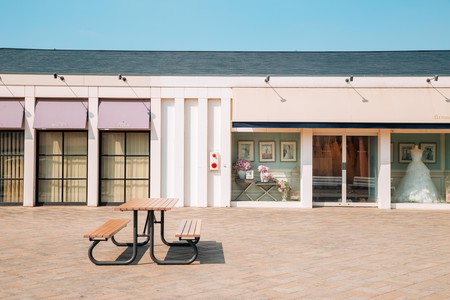 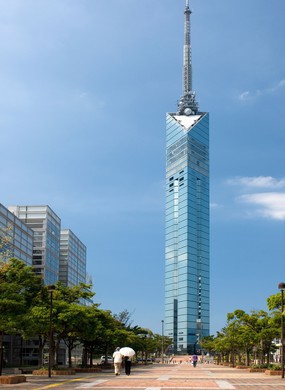 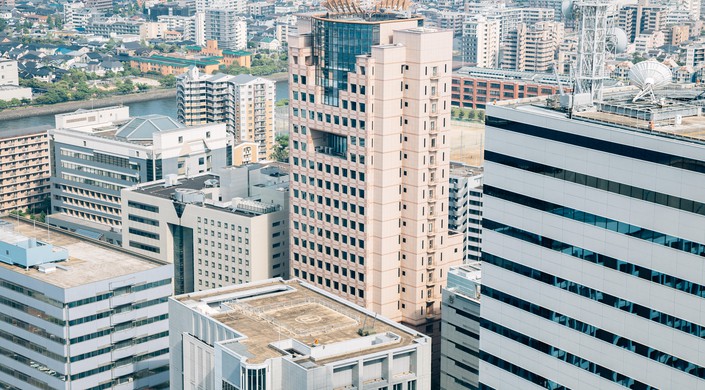 Go to the baseball

If there’s one symbol of the city that’s more iconic than Hakata ramen, it’s the Fukuoka SoftBank Hawks baseball team. This historic outfit plays at the Fukuoka Yafuoku! Dome – steps from the Momochi waterfront, and about a 10-minute walk north of Tojinmachi station. The ball park experience is quintessentially Japanese, taking elements of the MLB in the States but adding udon noodles, an army of mascots, and football-style support complete with songs and huge flags. Hardcore fans shouldn’t skip the stadium’s Oh Sadaharu Baseball Museum, complete with batting cages, memorabilia and an English audio guide. 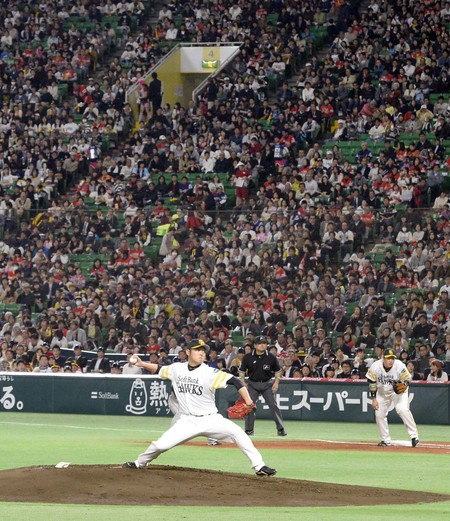 Two islands stare back at Fukuoka across Hakata Bay: Nokonoshima, a 10-minute trip from the Meinohama ferry terminal, and Shikanoshima, connected to the mainland by a causeway. Nokonoshima is famous for flowers, which bloom year-round in the Nokonoshima Island Park, as well as its white-sand beaches during summer. Shikanoshima – renowned as the place where the King of Na gold seal was discovered in the 18th century, now displayed at the Fukuoka City Museum – also supplies miles of golden coast alongside its shrines and hot springs. Both islands are bike-friendly and best seen on two wheels. 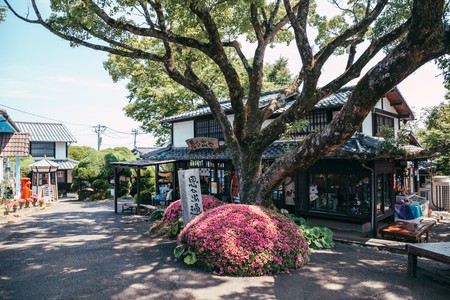 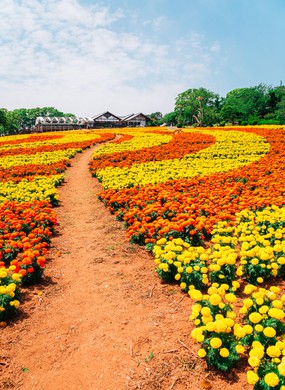 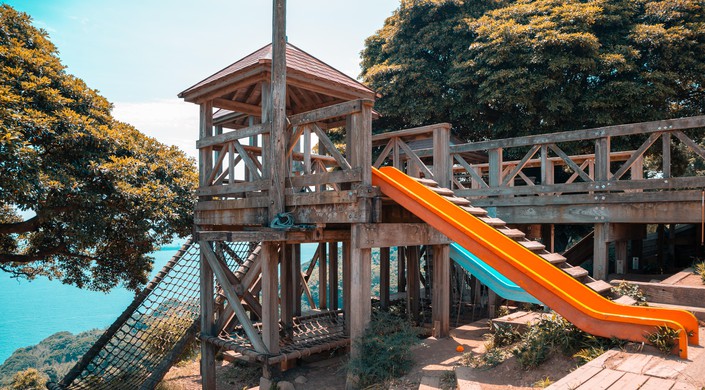 Festivals grip Fukuoka twice a year. The first is Hakata Dontaku during Golden Week (early May), a tradition dating back more than 800 years. For two days, Meji-dori turns into Dontaku Street – a sea of parades and performers not unlike a Japanese version of Rio’s Carnival. The second is Hakata Gion Yamakasa Festival in the first half of July, when seven Hakata neighbourhoods race elaborate floats through the streets. The old style of float (10m (33ft) tall and two tons heavy) aren’t exactly practical in the era of powerlines so they’re now used to decorate train stations and shopping malls, while the nimble new five-metre, one-ton models are dragged 5km (3.1 miles) from Kushida shrine at the crack of dawn on 15 July. 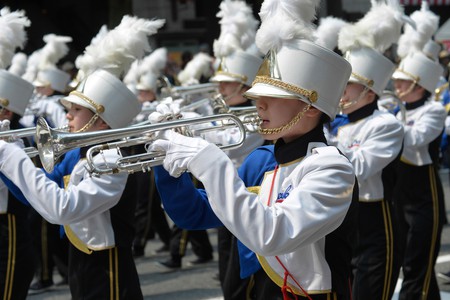 The Hakata Dontaku during Golden Week (early May), is a tradition dating back more than 800 years | © agefotostock / Alamy Stock Photo

Plan a day trip to Dazaifu

While Fukuoka is a great gateway to the rest of Kyūshū, the city can also serve as a launch pad for quick trips to a string of destinations on its doorstep. Dazaifu – the capital of the region for 500 years – is home to shrines galore and the shiny Kyushu National Museum only an hour from Fukuoka, with the Futsukaichi Onsen hot springs even closer. Kitakyushu – an industrial city a 17-minute trip by bullet train from Hakata station – is worth a visit for the rebuilt Kokura Castle alone. The beaches of Itoshima as well as Nanzo-in temple’s record-breaking Buddha statue are also within range of the city before venturing further into Kyūshū. 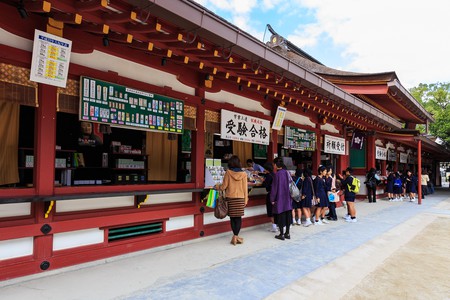 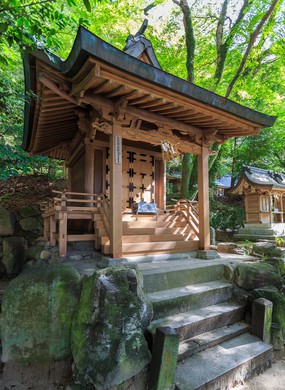 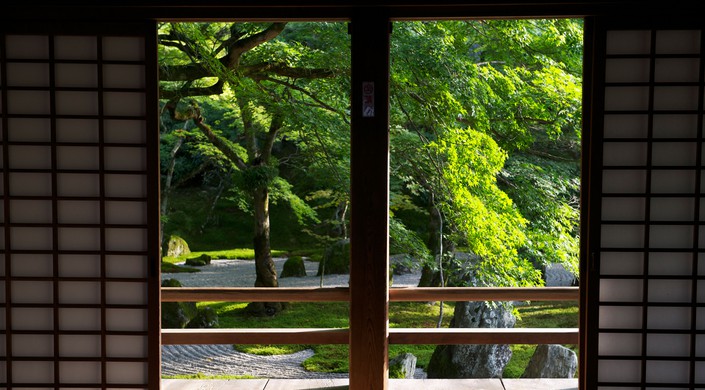