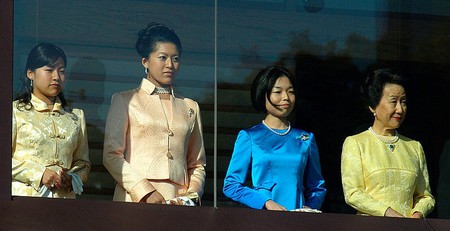 Last year it was big news around Japan and the rest of the world (well, at least in circles that follow royal families) when Princess Mako, the eldest daughter of Prince Akishino and granddaughter of Emperor Akihito, gave up her royal status in the name of love. However, perhaps Princes Mako was actually setting a new trend, now that Princess Ayako, Mako’s second cousin and daughter of the late Prince Takamado, has just announced she’s doing the same in order to tie the knot with her year-long boyfriend Kei Moriya.

You can thank to situation in part to the parents of the two, who introduced the pair just under a year ago. Princess Ayako and Moriya, a worker for the Japanese shipping firm NKY Line, were brought together by their parents who worked alongside each other at an NGO. Ayako’s mother thought it would be beneficial for her to meet Moriya in the hope of inspiring Ayako to becoming more engaged in human rights, especially in global child welfare, but she became engaged in marriage, too.

Her Imperial Highness Princess Ayako of Takamado and Mr. Kei Moriya are engaged to be married. The couple will wed in 29 October 2018 in Japan. Princess Ayako of Japan is the youngest daughter of the late Norihito, Prince Takamado. The late Prince is the first cousin of the Emperor of Japan. Princess Ayako will renounce her royal title and style before she weds and cease to be a member of the Japanese royal family, as required by Japanese law. She will become a commoner like the other female members of the royal family who wed. #princessayako #japan #royalwedding #engagement

Ayako’s previous history in the area of humanitarian work may have been one of the elements that united the pair. Ayako earned her master’s degree in social work, while Moriya, like his late mother, is a board member of the Tokyo nonprofit Children Without Borders.

Although Princess Mako was the first to announce her departure from the royal family, she postponed her wedding until 2020, but she officially gave away her royal status in September last year.

The country boasts the world’s oldest continuous hereditary monarchy, with a line that reaches back to 660 BC, when it’s said the first-ever emperor, Jimmu, ascended to the throne. It’s said the line has remained unbroken to this day.

What’s interesting is that Princess Noriko, Ayako’s sister, also left the royal family in 2014 after she fell in love and married another commoner, a Shinto priest. With all these princesses leaving the throne, it means that after Ayako and Moriya get married, the official count of the Japanese royal family will sit at just 17 members.

Although Japan’s monarchy is said to be the oldest in the world, perhaps – like the attempts made by the British Royal family – it’s in need of a little updating, lest it disappear completely. Currently, the move to force women who marry commoners to leave the family is being looked at by Japanese legislation, but they had better move fast, 17 people is less than two football teams!