An Introduction to Namie Amuro in 10 Songs 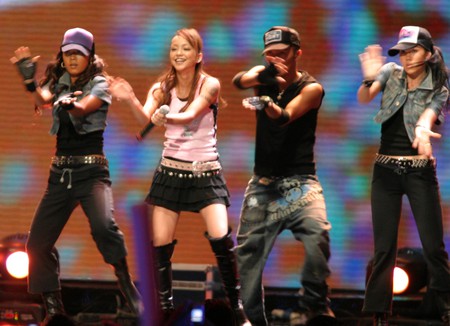 Namie Amuro is one of Japan’s most successful pop stars, often compared to Madonna in terms of reputation and influence. Get acquainted with this Japanese songstress with these 10 songs.

Namie Amuro’s first foray into the music industry was at age 14, when she was the lead in the pop idol group Super Monkey’s. The group eventually disbanded, and in 1995 at age 18, the singer released her first solo single “Body Feels EXIT” after signing on with label Avex Trax. The song was a hit and paved the way for the singer’s future success.

I Have Never Seen

By age 21 and three years after her first single, Amuro was already married to TRF band member Masaharu Maruyama and had given birth to her first child. Later that same year, she returned to the music industry after a brief hiatus with “I Have Never Seen” – her eighth number one hit on the Oricon charts.

Wishing on the Same Star

Amuro’s mother was murdered in 1999, and the star announced separation from her husband in 2000. Despite these personal struggles, it wasn’t until 2002 that her music sales began to decline. She was legally divorced that summer and her single “Wishing on the Same Star” was released in fall to a less than enthusiastic audience.

Want Me, Want Me

Although the star hadn’t been commercially successful in years, she was still a household name. In 2003, Amuro was invited to record a couple of tracks for the popular InuYasha anime series. Later, the single “Want Me, Want Me” was released in 2005 and marked the beginning of Amuro’s resurgence with her Queen of Hip-Hop album.

In 2007, “Baby Don’t Cry” was used as the theme song for the drama series Himitsu no Hanazono. It would become one of Amuro’s top selling singles, and the album Play released later that same year became her first chart topping studio album in seven years.

Break It/ Get Myself Back

Namie Amuro released her 34th single “Break It/Get Myself Back” in 2010. The song was chosen for a Coca-Cola Zero commercial and reached number three in the Oricon weekly chart.

2012’s “Love Story” was one of Namie Amuro’s most widely acclaimed songs. Its album Uncontrolled broke a record for the most sales in the first week of release by a solo artist in Japan, though the record was later broken by Keisuke Kuwata. The song was used as the theme song for the drama Watashi ga Renai Dekinai Riyuu.

I’m Not Yours (by Jolin Tsai feat. Namie Amuro)

Namie Amuro and Taiwanese pop star Jolin Tsai teamed up to create 2014’s “I’m Not Yours” for Tsai’s album Play. The song and accompanying music video were loved by fans all over the globe.

Amuro’s album Genic was released to generally positive reviews in 2015. It includes songs with EDM legend David Guetta, and even Hatsune Miku, the singing bot known as a Vocaloid that found fame as a solo artist.

Just You and I

Amuro continues to enchant audiences and in early 2017 released another single, “Just You and I”, to celebrate 25 years in the music industry, and possibly another album is to follow.