An Introduction To Miyavi In 10 Songs 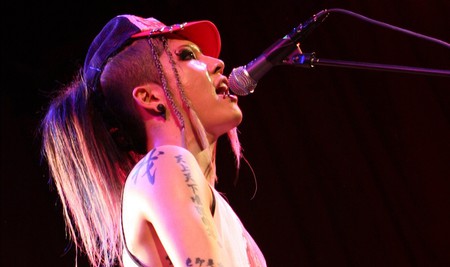 Miyavi circa 2008 | © Alterna2/Flickr (cropped from original)

Born Takamasa Ishihara, Miyavi is a multi-talented Japanese artist known for his guitar-slapping playing style. Aside from singing, songwriting, and playing guitar, he’s dabbled in music production, acting, and entrepreneurship. He was a pioneer in the field of Visual Kei and is famous for his style as well as his talent. Get acquainted with Miyavi in these ten songs, from the very beginning to the present.

Miyavi began his music career in 1999, at the tender age of 17. He joined J-rock band Dué le Quartz on the guitar while writing lyrics and helping with composition. At that time, his stage name was Romanized as Miyabi (雅), Japanese for elegant. In their first music video, Dué le Quartz makes a statement combining their Visual-Kei style with darker metal guitar riffs.

In 2002, Miyavi went solo and changed his name to its current spelling, although he still uses the kanji 雅. On his debut album Gagaku, the single ‘Jingle Bell‘ made it to the top 40 on the Oricon Chart. Around this time, he tried his hand at acting for the movie Ryomano Tsumato Sono Ottoto Aijin, and starred as himself in the movie Oresama (released in 2004).

A few of Miyavi’s own songs were featured on the Oresama soundtrack. ‘Coo Quack Cluck’ from his second album Galyuu didn’t make it into the top forty, but the film was popular among his existing fanbase.

Miyavi would later ditch the heavy metals in favor of a more upbeat, pop-style rock. The new sound was a hit, and in 2004 he signed up with Universal Music Group. His song ‘Kekkon Shiki Uta’ from his next album Miyavizm is his best charting single of all time at Number 6 on Oricon.

Albums MYV Pops and Miyaviuta -Dokusou were both released in 2005. During this time, he experimented more with acoustics. His appearance, while still considered Visual Kei, shifted to having more of a ‘samurai’ and traditional Japanese influence. ‘Selfish Love’ off the Dokusou album is a perfect example of Miyavi’s guitar-slapping skills at their best.

Miyavi founded J-Glam (Japanese Glamorous) after his contract with PS Company ended (which co-managed him along with Universal). It is a talent management, development, and production company of which he is still the CEO. He later signed with EMI Records Japan to release his next album, What’s My Name? in October 2010, which charted at Number 26 on Oricon.

Samurai Sessions Vol. 1 was released in 2012. It fared better on the charts than his previous release and prompted a nationwide promotional tour. Miyavi collaborated on ‘Strong’ with the Japanese rapper Kreva. Released three years after the birth of his daughter, Lovelie Miyavi, the new dad began to tone down his stage looks but stayed true to his musical style.

‘Ahead of the Light’

In 2013, Miyavi released his self-titled album with three singles on the Japan Hot 100, including ‘Ahead of the Light.’ Miyavi made it to Number 8 on Oricon on its release, and it is his best-selling album of all time. In the same year, it was announced he would play the role of Mutsuhiro Watanabe in the movie Unbroken. It was a brave move – the film was not met positively by many Japanese who viewed it as insensitive at best and slander at worst.

Miyavi shows no signs of slowing down. He released albums The Others in 2015 and Firebird in August of this year. Miyavi touts ‘The Others’ as being ‘edgier and more aggressive‘ than his previous works, and is about coming to terms with being an outsider.