An Introduction to 'Beat' Takeshi 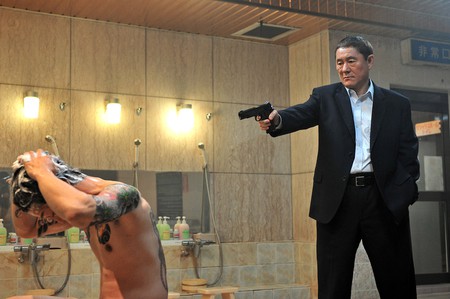 Takeshi Kitano, popularly known as ‘Beat’ Takeshi, is the grumpy old man of Japanese cinema. With a face carved out of stone and an expression that veers between ‘indifference’ and ‘say-goodbye-to-your-kneecaps’, he is Japan’s most successful cultural export alongside Super Mario and Hello Kitty.

Kitano is best known to Western audiences as the director – and often star – of violent dramas set in Japan’s criminal underworld. At home, however, he is a multimedia superstar and renaissance man, putting his name to everything from a hugely successful career in comedy to his very own video game.

Switch on a TV in Japan at teatime and Kitano (usually in some sort of inexplicable headgear) will be a regular sight, offering up his two pence with arms folded while wearing his unmistakable perma-scowl (the result of a motorcycle accident leaving him unable to completely move one side of his face). In addition to this he is a painter, poet, writer and producer. He can, apparently, sleep when he’s dead. 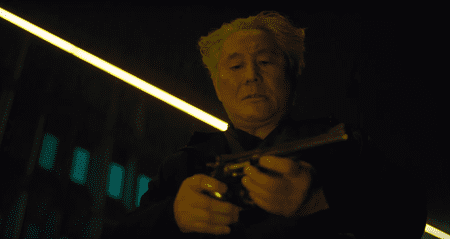 Born in Tokyo in 1947, Kitano tried his hand at an engineering degree at Meiji University but dropped out at 19, making his way into comedy and becoming a household name in 1970s as part of The Two Beats, a comedy duo with Kaneko Kiyoshi specialising in the Manzai style of comedy, in which a funny man and a straight man trade jokes at dizzying speed. Even if you have no command of Japanese the sheer spectacle of their rapid-fire wordplay is a sight to behold.

Kitano was a provocateur of Japanese entertainment even then. His material was far more risqué than his contemporaries and he even managed to earn a five-year ban from NHK (the Japanese BBC) for exposing his body parts at a time when it was strictly forbidden.

Having given new meaning to the phrase ‘body of work’, Kitano went solo and would discover his niche while doing comedy skits playing yakuza, apparently inspired by real-life Japanese gangsters who would drink with him after he performed at late-night comedy clubs.

His first-ever appearance on the silver screen came in 1983 with Merry Christmas Mr. Lawrence, starring alongside Tom Conti and David Bowie. The role was a complete departure for Kitano, playing a tough sergeant at a POW camp in Japan, so much so that Japanese audiences laughed out loud at the sight of a comedic institution in serious fare. But Kitano was undeterred and ploughed ahead. 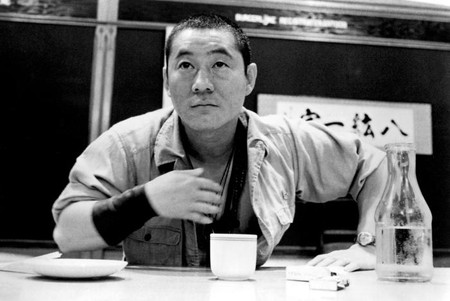 The year 1986 is notable in Kitano lore as he helped design his very own video game – Takeshi no Chosenjo, or Takeshi’s Challenge. At the time, the video game boom was in full swing in Japan and Kitano’s involvement was an unprecedented step for a Japanese celebrity.

The twist was that Kitano actively despised video games and wreaked spiteful vengeance by deliberately making something that was all but unplayable, with impenetrable difficulty and instant deaths. Kitano would make suggestions for the game – often made while drunk on sake – which were then implemented by a reverential development team –including a section where the player must not touch the game controller for an entire hour.

Embedding himself ever further in Japanese life, he was also a driving force behind cult TV show Takeshi’s Castle, in which hapless contestants must conquer ever-more challenging obstacle courses, risking humiliation and minor injury in the process.

Kitano’s big break as director came about under unlikely circumstances. In 1989 he was cast as the male lead in the gritty drama Violent Cop, director Kinji Fukusaku (later to go on to direct Battle Royale) pulled out at the last minute. With no directing expertise whatsoever, Kitano was given the go-ahead to not only direct the movie but also rework the script. The movie made a sizeable splash on impact and Kitano was a bold new force in Japanese cinema.

The film which enabled him to make his mark outside of Japan was his fourth feature, 1993’s Sonatine, a slow, almost meditative yakuza drama set mostly in Okinawa. Poorly received at home, the film was a critical darling overseas and helped bolster an international fanbase, ensuring that Beat Takeshi would eventually become as revered outside Japan as he was inside it. His earlier lack of directorial ambition meant that, free from conventional filmmaking wisdom, he would solidify an unassuming directorial style – long, static shots, pregnant pauses, sudden, shocking violence – that was all his own.

He continued to make a stream of acclaimed movies throughout the 1990s, punctuated with a small role in 1995’s bizarre Keanu Reeves vehicle Johnny Mnemonic, before dreaming big and setting his sights on having an international hit. In 2000, he made Brother, an American-English-Japanese co-production in which plays a yakuza intent on muscling his way into a criminal empire in Los Angeles. The film itself is decent enough and ticks all the right boxes but failed to find its footing and made a minimal impact at home and abroad. Disillusioned, Kitano said he would never make another film outside Japan again.

The Cult of Kitano got even bigger in 2000 of with his appearance in Battle Royale, one of the greatest Japanese films ever made and a worldwide smash hit, both critically and commercially. Not long after that he left his comfort zone to make Zatoichi, a chanbara, or sword fighting movie set in feudal Japan. Kitano played the titular swordsman – a blind masseuse by day who happens to be a dab hand at carving his enemies into large bloody chunks like so much human sushi. Violent, dynamic and funny, it sits comfortably among Kitano’s best work.

Throughout the noughties and beyond, Kitano has stayed prolific. This year has been notable for two reasons, the first of which was a major role in the live-action adaptation of anime classic Ghost In The Shell. Somewhat unsurprisingly, Kitano has no love for anime or manga, but took the gig anyway, presumably to make people angry. He is also releasing Outrage: Final Chapter, the final part of a brutal Yakuza trilogy, earlier instalments of which were Kitano’s best-received films in years.

In his own words: “My core activity is trying to avoid being pigeon-holed by the public.”

Outrage: Final Chapter will be released in Japan on October 17.