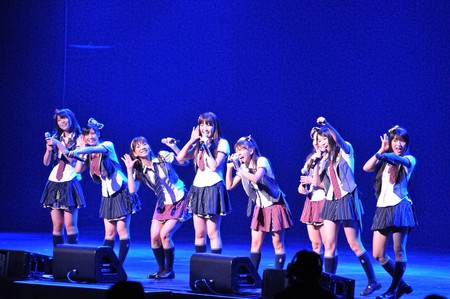 When it comes to J-Pop, there’s no group bigger, more fascinating, and groundbreaking than AKB48. From unconventional career trajectories to unbelievable controversies, this 100+ member collective has changed the shape of pop music in Japan beyond even its creators’ wildest imaginations. Here’s a guide to everything you need to know about AKB48.

The group first formed in 2005, as a girl group concept by music producer and media savvy personality Yasushi Akimoto. In a world where superstars seemed untouchable, Akimoto wanted to create a collection of J-Pop idols that were accessible, basically “idols you can meet.” When most other Japanese pop idols would occasionally perform concerts and mainly appear on TV, Akimoto’s grand vision was to have a group with their own theatre, a group that would perform almost every night, giving fans the ultimate inclusive experience. The location of their theatre, Tokyo’s Akihabara (Akiba for short), would become the group’s namesake.

The growth of AKB48

In July of 2005, Akimoto hosted auditions for what would become the first incarnation of AKB48. Almost 8,000 girls auditioned, but only 24 were selected as the band’s first-generation members. In December of that year, 20 members made their debut as “Team A” in the AKB48 theatre; they performed that show to an audience of supposedly seven, but it didn’t take too long for AKB fever to spread, and before long their fan base started to swell. 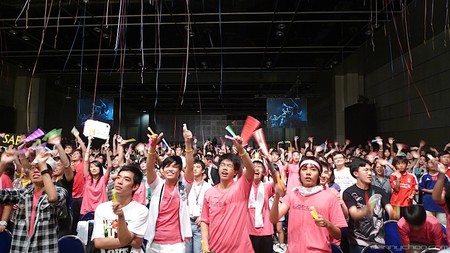 The band’s second audition came in early 2006. Set up as a promotional partnership with Japanese telecommunications company NTT DoCoMo, the almost 12,000 applicants submitted their auditions by phone. 18 new members joined to form “Team K.” During this time, the group released the single “Sakura no Hanabiratachi,” which sold a whopping 22,000 copies in its first week and shot up the charts. In October of this year, a third audition took place, for “Team B” (to fill out the AKB), more singles were released, and the AKB train was fully in motion.

The group you can meet

What made the made the group so popular and what continues to fuel the band’s popularity today largely has to do with their incredibly fan-friendly image. The group was formed with fan accessibility in mind, and pandering to their fans is still a large portion of how AKB48 operate.

Firstly, rather than focusing on playing tours (though they’re not adverse to this), the band has their very own AKB Theatre in the heart of Akihabara. With a capacity of 250 people per show, fans are required to enter a ticket lottery in order to purchase passes. Part of what makes their fandom so crazy is that the band work on this ideology of almost “accessible exclusivity,” like their limited release merchandise, which is their special collector’s edition music releases that flood the market but in a very controlled way, and the fans lap it up.

Beyond the live shows

As well as a concert hall, they also have an AKB48 café in Akihabara where fans can console themselves about missing out on tickets by buying a whole bunch of different AKB48 merch. The group also hosts a number of public “meet-and-greet” events; however, access to these events usually requires the purchase of a limited edition CD, which comes with passes to these types of events. Die-hard fans often buy a number of the CDs, and consequently a number of the passes, so they can have longer access with their favorite idols.

Over the years, the group has not been a stranger to controversy. The video for arguably their biggest single “Heavy Rotation” was slammed by many as almost soft-porn. Featuring the members in bed in their underwear, it’s no doubt a sexually suggestive clip pandering to their largely male audience. A commercial shoot the band did for Puccho Candy featured the girls clad in school uniforms passing candy from mouth to mouth. Enraged viewers claimed it was unhygienic, an encouragement of homosexuality, and a bad example for children.

In 2013, the group’s biggest international controversy came in the way of a YouTube video shot by member Minami Minegishi. Appearing on screen almost inconsolable with a shaved head, Minegishi told viewers that she had violated her AKB contract by spending the night with her boyfriend. As a result she was demoted to “trainee” status; the head shaving was Minegishi’s own decision, a move typically recognized in Japanese culture as a sign of punishment, and a taking of responsibility for their disappointing actions.

In May 2014, two AKB48 members were attacked with a saw by a supposed “fan” at a meet-and-greet event. Members Rina Kawaei and Anna Iriyama who were 19 and 18 at the time suffered broken bones, cut hands and cuts on their faces, but ultimately recovered.

With the overwhelming success of AKB48’s exploits, the band’s founder Akimoto has attempted to recreate the magic by forming “sister groups.” Like AKB, these groups often perform in their own home city’s theaters. The band’s first sister group was SKE48, formed in 2008 with their theater in Sakae, Nagoya, since then the brand has expanded beyond Japan. There’s BNK48, based in Bangkok, Thailand; MNL48, based in Manila, the Philippines; and TPE48, based in Taipei, Taiwan. This year the world will also meet MUM48, a new subgroup based in Mumbai, India. This pop group formula is so well recognised, it’s even been parodied by grandmas in Okinawa.

The band now continues to be as popular as they ever were. In fact, they’re so big that they’re essentially a cultural phenomenon; beyond music, the group also has been featured in a number of manga series, video games, and other media, including their hit weekly TV shows AKBingo! and AKB48 Show!, which broadcast on two different networks. The group is also set to release their new LP, which will be their ninth album titled “Bokutachi wa, Ano Hi no Yoake wo Shitteiru” at the end of January 2018.

Given the groups’ history of unorthodox projects and unconventional career trajectories, what happens next is really anyone’s guess. Though they’ve been put forward, whether you’ll see them performing as part of the 2020 Olympics is questionable, as the Japanese Olympic Committee and media personalities in the country have slammed the group as too “embarrassing” and not the image Japan wants to share with the rest of the world. Given their propensity to march to the beat of their own drum, however, it wouldn’t be surprising if they just started their of AKB-Olympics.