An Insider's Guide to the Best Things To Do in Nara 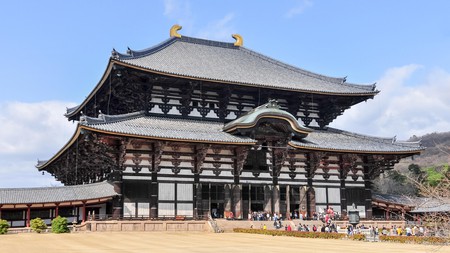 Japan’s first capital, Nara, is still home to some of the country’s most magnificent temples and shrines, along with several fine gardens and picturesque traditional neighbourhoods. Bursting with charm and boasting eight UNESCO World Heritage sites, Nara is a treasure trove for lovers of art and architecture.

Located on the gentle slopes of the Yamato Basin, Japan’s ancient capital, Nara, is one of the best-preserved cities in Japan. Founded in 721, today Nara has a somewhat sleepy feel, but the buildings that survive from this era more than hint at its former magnificence. This was once the cultural, political, economic and religious hub of a great empire. And the city still bristles with the stunning architectural achievements of the era to which Nara lends its name, including the great bronze Buddha of Todai-ji Temple, Kasuga-Taisha Shrine and the towering pagoda of Kofuku-ji.

Established in 1880, Nara Park is home to one of the city’s premier attractions, a large herd of semi-wild deer. Over the centuries, the deer have learned to bow to visitors to ask to be fed with the crackers that can be purchased around the park. The origin of these deer lies in the connection with the god Takemi Kajichi no Mikoto, enshrined at the adjacent Kasuga Shrine. This spirit, the patron of the Fujiwara (the most powerful aristocratic clan during much of the Nara and Heian Periods), is said to have first arrived in Nara upon a supernatural white deer. Because of this legend, deer were considered sacred messengers – and even into the twentieth century, killing a deer in Nara was punishable by death. The park is a five-minute walk from Kintetsu Nara Station, or about a 20-minute walk from JR Nara Station, and borders a number of Nara’s most important attractions, including Todai-ji, Kofuku-ji and the Nara National Museum.

Perhaps the most famous temple in Japan, Todai-ji was constructed in 752, and grew so powerful that the capital had to be moved away from Nara in 784 in order to try and escape the smothering influence of its all-powerful abbots. Inside the temple, you will find the world’s largest bronze Buddha, the Daibutsu. Standing at 15 metres (49ft) tall and weighing some 500 tonnes, this is a truly colossal figure – construction was so expensive that it bankrupted eighth-century Japan. Be sure to notice the hole in the base of one of the pillars adjacent. This is called the Daibutsu’s nostril, and it is said that those who can squeeze through this opening will be granted enlightenment in their next life. Until recently, this structure was officially the world’s largest wooden building, despite the fact that the present reconstruction of 1692 is only two-thirds of the original temple hall’s size.

The downtown of Nara is on the east side of what was once the ancient Heijo Palace site. Today, beautifully preserved machiya (merchants’ houses) and warehouses still line the narrow lanes of Nara’s Naramachi. As well as these beautiful remnants, visitors can see a number of boutiques, shops, cafés, restaurants and a few museums. To get the best out of a visit, make your way to the area in the evening, when the crowds have thinned out. As dusk descends and the town’s lanterns are being lit, squint and you can imagine you have been transported back in time. One of the best things to do is simply to get lost, wandering the narrow lanes and soaking up the atmosphere. For a more structured time in the town, drop into the local craft museum or visit the Imanishike Shoin house to inspect its immaculate gardens and enjoy a cup of green tea.

If you order sushi in one of Nara’s more traditional restaurants, you may be surprised to see that it arrives wrapped in kaki (persimmon) leaves. In years gone by, sushi had to be transported overland to Nara, a city far from the coast. It was discovered that persimmon leaves have antibacterial properties that helped to keep the fish fresh – while also contributing a subtle fragrance of their own that enhanced the flavour of the fish. To try this delicacy, head to Hiraso, founded near the Yoshino area 150 years ago. There are four branches in Nara, but for the full sit-down experience, the Imamikadocho location is the only option. This sushi is an example of the sort of unfailingly refined experience that marks out Nara from the more run-of-the-mill Japanese city.

The most beautiful garden in Nara, Isui-en is conveniently located on the way from the train stations to Todai-ji. Take some time to stroll the garden and admire the tea houses scattered throughout. The garden is famous for its use of shakkei, the technique of building a garden or landscape in harmony with the surrounding natural environment, in this case incorporating the roof of Todai-ji Temple and other Nara landmarks into the scenery. For a few hundred yen (around £6), visitors can enjoy a cup of matcha and a traditional tea sweet. Included with admission is a small museum displaying pottery, seals, mirrors and other ancient artefacts.

Shrine
Facebook
Email
Twitter
Pinterest
Copy link
Share
You can’t travel to Nara and not visit the Kasuga-Taisha Shrine – one of the most architecturally important buildings in Japan. The shrine dates to the establishment of Nara and is dedicated to the deity responsible for the protection of the city. Like the Ise Shrine, Kasuga-Taisha had been periodically rebuilt every 20 years for many centuries. In the case of the Nara shrine, however, the custom was discontinued at the end of the Edo Period. A short walk from the main complex is the shrine’s botanical garden, which holds about 250 kinds of plants that were referenced in the Manyoshu, Japan’s oldest collection of poems. Fujiwara, the name of the shrine’s original patrons, means ‘fields of wisteria’, and a large part of the garden is dedicated to wisteria, and is best viewed from late April to early May.

If you start to suffer from the famous temple fatigue, consider a visit to Watawata, Nara’s original owl café, located just a five-minute walk from the JR Train Station. This unusual establishment is home to more than 10 distinct breeds of owl, of whom four or five are on duty at any one time. Entry is ¥1300 (£10) and includes a drink and the company of the owl of your choice for one hour. The friendly staff speak English and are happy to explain about the owls and their welfare.

Forest, Natural Feature
Facebook
Email
Twitter
Pinterest
Copy link
Share
What is forest bathing? Called shinrin-yoku in Japanese, the term originated in the 1980s as a response to increasing burnout in the big cities. Kasugayama Primeval Forest in Nara – within walking distance of Nara-koen – is the perfect place to try this concept. With 620 acres (250ha) of primeval woodland, the forest is home to 175 varieties of trees, 60 bird species, and more than 1,000 types of insect. Ask at the Nara tourist office about organising a guide to take you on a hike through the forest, allowing you to inspect plants and insects up close, or to just breathe deep and take in the sounds of the forest.

Buddhist Temple
Facebook
Email
Twitter
Pinterest
Copy link
Share
At a towering 50 metres (164ft), the five-storey pagoda of Kofuku-ji is Japan’s second tallest, second only to Toji in Kyoto. Kofuku-ji used to be the family temple of the Fujiwara, and at the height of this clan’s power, the temple comprised more than 150 buildings. Today, as well as a fine collection of surviving buildings, the temple boasts one of the finest museums of ancient Japanese sculpture, paintings and calligraphy. Kofuku-ji is located just five minutes’ walk from Kintetsu Nara Station, or a longer 20-minute walk from JR Nara Station.

Opened in 1909, the Nara Hotel is one of the most historic hotels in Japan. The list of visitors to this venerable institution reads like a Who’s Who of the 20th century and includes the likes of Albert Einstein, Charlie Chaplin, Edward VIII, Bobby Kennedy, the Dalai Lama, Marlon Brando, Nehru and Joe DiMaggio. Located on the hillside overlooking Nara Park, it was designed by Tatsuno Kingo, the architect behind the Bank of Japan building and the Marunouchi building of Tokyo Station. If budget is no object, there is no competition.

Park
Facebook
Email
Twitter
Pinterest
Copy link
Share
A 40-minute train ride from Nara, Mount Yoshino has been inspiring Japan’s poets since the 8th century. It is here that Japan’s obsession with sakura first found form, and today this mountain is home to some 30,000 cherry trees, an unforgettable sight. The blossom typically starts opening in late March and reaches full bloom around early to mid-April. Because of differences in temperature, the blooming season is staggered between the lower, middle and upper reaches of the mountain as the blossom gradually climbs the slope. In 2004, Yoshino, together with Mount Koya and Kumano, was designated a cultural UNESCO World Heritage site. Praising the power of the mountain, the great Heian era poet Saigyo wrote, “I’ll forget the trail I marked out on Mount Yoshino last year; go searching for blossoms in directions I’ve never been before.”