A Year in 22 Japanese Festivals 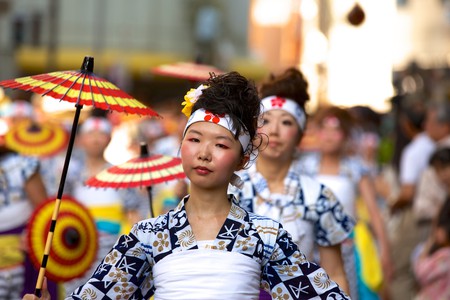 One of the greatest things about visiting Japan is that no matter the time of year, the country is seemingly always hosting a festival or celebration of some sort. From the big to the super local, from the traditional and historic to the downright weird, there’s never a lack of parties happening in this vibrant country.

1st – 3rd: O-Shogatsu, All Across Japan
Shogatsu is the country’s annual New Years Festival and arguably the biggest seasonal event on the Japanese calendar. It’s a lot more of a family focused affair than its western contemporaries. No matter where you are in Japan, you will stumble across a Shogatsu celebration during December 31st – Janurary 1st. Usually people get together to eat special symbolic ‘long life’ foods like mocha and pray for a healthy new year.

15th: Nozawa Fire Festival, Nagano
Held in the snow covered alps in Nagano prefecture, the Nozawa Onsen Village’s fire festival lights up the town every January. Considered one of the country’s best fire festivals, the town is home to a massive tower that is set alight in the hope for good health.

3rd : Setsubun, All Across Japan
Like New Years this event actually happens all around the country. Marking the day before spring on the old calendar, Sestubun is a festival where roasted beans are thrown inside and outside of people’s houses in order to ward off any lurking demons. During this time shrines host bean-scattering events, and other ceremonies used to drive away evil.

Local festivals are always fun! This oni (or evil spirit) is from my visit to Setsubun Festival at Heian JIngu in Kyoto. Setsubun marks the transition from winter to spring, where evil spirits are sent off by throwing beans at them while chanting "Oni wa sort, fuku wa uchi" – loosely translated to "go away evil spirit, happiness come to my house". ⛩⛩⛩

All month: Sounkyo Ice Festival
More of an ongoing event than a one off celebration, the small Onsen town of Sounkyo is home to one of the most stunning collections of ice sculptures in the country. Located not too far from Sapporo you can explore the ice buildings that tower up to three stories high!

3rd: Hinamatsuri, Kyoto
Also known as ‘girl’s day’ Hinamatsuri is the annual celebration of Japan’s young female population. During the celebration platforms covered with a red carpet are used to display ornamental dolls which represent the Emperor, Empress, and other figures of the Heian period. During this time throughout Japan there are paradise and special localized festivals celebrating the day, however Shimogamo Jinja, in Kyoto is one of the biggest homes of the celebration and worth checking out during this time.

Late March: Sumo Spring Basho, Osaka
Happening in late March, The Sumo Spring Basho is one of the only six annual Grand Tournaments of sumo in the country and it the only chance each year to see a professional match in Osaka. During this time the air is electric with excitement as people from all across the country come to witness this traditional sport.

The first Sunday in April: Kanamara Matsuri
Held every year at Kanayama Shrine in Kawasaki, not too far from Tokyo, is one of the country’s more interesting festivals, Kanamara Matsuri aka the Festival of the Steel Phallus. Here locals and visitors gather together to watch the two meter penis parade through the streets and to pray for protection from sexually transmitted infections.

4th: Ose Matsuri, Shizouka
Each April men from Shizouka Prefecture dress in women’s clothing to dance onboard a boat. It sounds a little crazy and if you witness the event you’ll realize it is. Covered in flags and colorful decorations it’s a visually striking celebration for the area’s fishermen.

13th-15th: Sanja Matsuri, Tokyo
Held in the historic suburb of Asakusa, thus event features one of the largest mikoshi (portable shrine) parades in the country. The celebration which features geisha and tattooed yakuza (mob) members attracts two million visitors to the area each year.

1st- 2nd: The Kaiko Kinenbi, Yokohama
Though it may be Tokyo’s forgotten bayside sister, Yokohama the port city located under an hour from Tokyo is home to a number of exciting celebrations. The Kaiko Kinenbi (Yokohama Port Opening Festival) is just one of these said events. An annual celebration marking the opening of the port, Kaiko Kinenbi featuries boat races, music dancing and a whole stack of incredible food.

Early – mid June: Yosakoi Soran Festival, Sapporo
Taking place in Orodri Park in the popular city of Sapporo, this festival is a must visit event for those in the area during the summer period. A more modern take on the traditional awa odori dance events, it’s a huge street party that runs over a number of weeks beginning in early June.

4th – 8th: Shounan Hiratsuka Tanabata Matsuri, Hiratsuka
Also known as the star festival, Tanabata celebrations happen across Japan. However this Kanagawa based event is one of the biggest in the country, attracting over three million people annually. Located near Fuji this usually quiet beachside city comes alive with massive parades and shows filling the streets throughout the celebration period.

30th – 1st Aug: Sumiyoshi Matsuri, Osaka
Considered one of the last summer festivals on the annual calendar, the Sumiyoshi Matsuri, is a traditional style celebration that takes place over three days and sees are various Shinto purification events happen throughout the city.

2nd – 7th: Nebuta Matsuri, Aomori
This famous summer festival is one of the area’s Three Great Festivals of the Tohoku Region. The highlight of the event is the town’s two dozen floats that tear down the main passageways of the city. It takes the locals an entire year to design and construct the colourful floats which make an appearance every night of the festival. They often depict gods, historical or mythical figures from both Japanese and Chinese history.

6th – 8th: Tanabata Matsuri, Sendagi, Tokyo
Like the Tanabata events that happen across the nation, this one is also in celebration of the ancient story about the meeting of two stars, Altair and Vega. During these few days the northern ‘Old Tokyo’ suburb of Sendagi, near Nippori (the more traditional pocket of the city) is home to colourful decorations and incredible energy.

8th: Warai Festival, Wakayama
This somewhat bizarre laughing festival in the city of Wakayama sees participants laugh in time to the rhythmic jangle of small bells and commands from a leader dressed as a clown.

22nd: Hi Matsuri (Kurama Fire Festival), Kurama, Kyoto
Held in the mountain village of Kurama to the north of Kyoto this unique autumn festival sees participants carry five to six meter long torches that weigh 100kg, thorough the city to light bonfires that are dotted across the streets.

3rd: Betchya Festival, Hiroshima
During this very interesting event men from the prefecture wear masks and dress up as lions, while they run through the packed streets of Onomichi hunting for children to ‘thrash’ with bamboo whisks. Though it sounds scary, legend says that children ‘beaten’ will be safe from illness for the following year.

9th: Misogi Matsuri, Gifu
Happening at Katsuragake Shrine, in the Gifu Prefecture, this even sees naked men purify themselves by running into the freezing Nagara River three times throughout the day at 3pm, 7pm and 10pm. It’s definitely a sight to see.

31st: Namahage, Akita
Located in Oga Peninsula, Akita Prefecture this fascinating and scary folk tradition is a celebration in preparation for the new year. Here in villages all over the peninsula young people dressed as frightening Namahage (ogre like deities) visit the homes of children to and scare them into not being lazy in the coming year, otherwise they may be stolen and taken in to the neighbouring mountains.