A Traveling Family's Guide to Universal Studios in Osaka

For many traveling families, a trip to Japan’s Universal Studios is a once in a lifetime experience, so you want to do it right. From finding a place to stay to understanding how the ticketing system works, planning this trip can be confusing and even frustrating. So, here are some tips from a traveler who has been there and done that with two kids in tow.

While Osaka has plenty of hotels to suit all budgets, the best area to stay when visiting the studios is Universal City Walk. It’s an arcade with tons of restaurants, shops and a number of hotels, all of which are a few steps from the front gate of Universal Studios. You really won’t understand how convenient this is until the end of the day when your tired kids just want to jump into the hotel bed. Imagine having to take the train or a taxi back to the hotel after eight hours of running around at the studios. It’s every parents’ nightmare.

Citywalk also has its own train station, so if you want to visit the city during your trip, it’s very easy and cheap to do so.

Hotels here are a little more expensive but well worth the extra cash. Most are pretty new and in great condition. 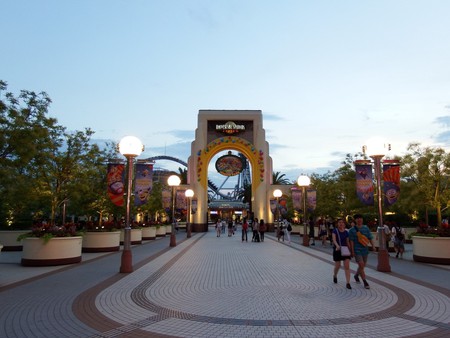 The majority of travellers visiting both Osaka and Universal Studios arrive through Kansai International Airport. While getting the bus may sound like a daunting task, the service is top class. Right outside either terminal, you’ll find stops for buses that take you directly to Universal Citywalk, and assuming that you’ve chosen to stay there, it’s a two-minute walk to your hotel from the bus stop. The bus is a much cheaper option to a taxi, and they run like clockwork.

Tickets for the studios

Most hotels will have a dedicated ticket counter and buying a ticket from here is no trouble at all. Hotels rarely run out of day passes, but it’s a possibility. In this case, you’ll have to head for the front gate and jump in a queue. The gates open at 9am but queues may form much earlier. To avoid all this, check out the Universal Studios Website and buy tickets from one of their authorized agents.

Ideally, you’ll want to order an Express Pass. These tickets cost more but allow you to jump the regular queue and gain faster entry to the rides. For parents with young kids, they’re priceless. There are several packages that cover different rides, so make sure you purchase the correct ones. You’ll need to pay close attention to any height requirements so you don’t pay for a pass that your kids are unable to use on the day.

Many of the rides here are so popular (Harry Potter and the Minions) that even though you have an entry pass for the studios, you’ll need a timed ticket to get on the ride. Your Express Pass will have a time printed on it for each ride. You must use your pass during these times, or you’ll have to join the regular queue. For rides that you don’t have an Express Pass for, you may need to get a timed entry ticket from the front ticket office. If in any doubt, the staff will be happy to assist you. 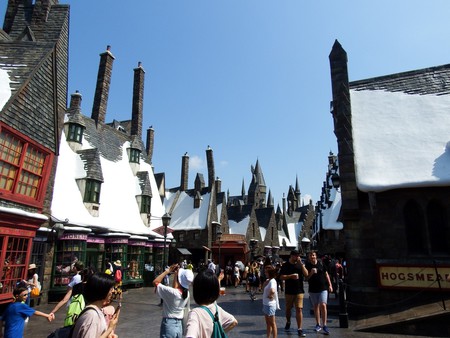 Some of the rides might be a bit scary for younger kids – Jurassic Park and Jaws particularly so, and the walk through Hogwarts is dark and a little spooky for kids that scare easily. Overall it’s pretty fun, but if you’re not certain your kid can handle it, check out the ride description online and take a look at the videos.

There are some nice areas in Universal Wonderland that are perfect for little ones. These tend to be quieter than the rest of the park which is an added bonus. Here you’ll also find a couple of rides for bigger kids as well as a place where they can drive cars around on tiny roads. 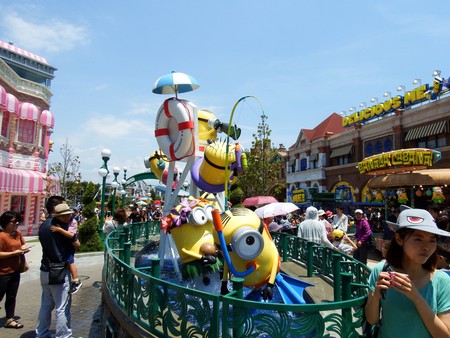 You can’t take any food or drinks into the park, so it’s a good idea to fill up on breakfast at the hotel. Of course, there are plenty of places to eat in the park, but this is where it gets expensive and time-consuming.

Many people decide to eat in one of the bigger restaurants scattered throughout the park, which means queues. The food is good but it’s not cheap and waiting for a table with kids can be tough. A better option is to look for some of the smaller stands that sell food, like those in Amity Village, where you can grab some fries or a slice of pizza and sit on the benches outside.

It’s advisable to bring your own refillable bottle, as there are lots of water fountains where you can refill for free. Vending machines are everywhere of course, but as you may have guessed already, these aren’t cheap.

There’s a medical center at the front of the park, so you won’t need any bandages for scuffed knees. However, it does get very hot in the summer months, and there’s a good chance you or the kids may get burned while out in the sun, if you’re not careful. Bring plenty of sunscreen, a hat and sunglasses. It’s a good idea to bring a bag big enough to put all the hats into as you’ll be required to take them off for some of the rides.

Unfortunately, there are no convenience stores in the park, only gift shops. So don’t expect to be able to pick up any sunscreen once you get through the gates.

With your hotel so close, it might be tempting to head back for a nap or a bite to eat at some point during the day, but if you do, you won’t get back into the park. Passes are for one-time entry.

There are plenty of seating areas scattered throughout the park although some are in direct sunlight. Universal Wonderland has an indoor area called Imagination Playland with seating that is nice and cool. 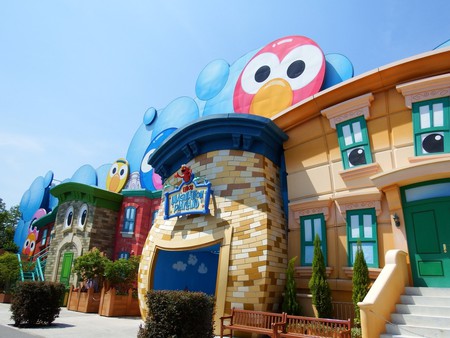 Universal Studios is one of the most popular tourist attractions in Japan so no matter when you go, you can expect crowds. However, by avoiding school holidays and weekends, you’ll certainly see fewer people at the park.

As mentioned, during the summer months, it gets very hot in the park. If you’re not a fan of the sun, then try the colder months of the year. You may also find that hotels are cheaper during this time too.

How much money do I need for the park?

This depends on your needs. Are you planning to buy a ton of gifts? If so, bring the credit card as the gift shops are not cheap in the slightest. Restaurants are typically expensive too, so you’ll need to budget for mid-range restaurant prices.

If you eat at the smaller places and stick to light meals, then you won’t need much money at all. But we all know what kids are like. Using up so much energy makes them hungry, and with no food in your backpack, you’ll have to break out the wallet more often than not. Don’t worry though, there’s an ATM in the park in case you run out of cash.

Whatever your daily budget is for Osaka, bring twice as much (and a credit card!) for Universal Studios, and you’ll be fine. Enjoy!