A Solo Traveller’s Guide to Hiroshima 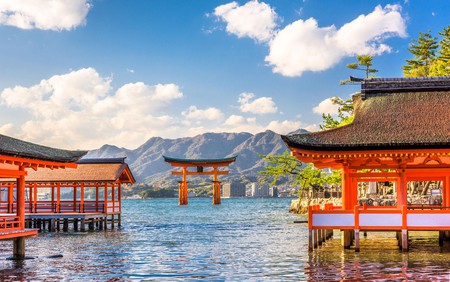 You probably already know that Hiroshima was the victim of an American atomic bomb blast in 1945, an event that devastated the city and left the local population with unimaginable long-lasting impacts. But what you might not know is that despite its dark past, Hiroshima has a thriving present. This southern centre has been rebuilt, revived and reinvented as a place of culture and peaceful, contemplative reflection.

What’s the vibe for solo travellers

Like elsewhere in Japan, Hiroshima is welcoming and safe for visitors. And in many ways, it’s a city that’s best seen while travelling solo. The unique experiences you will have here, viewing the Atomic Bomb Dome and touring the Hiroshima Peace Memorial Park, are well suited to quiet introspection. 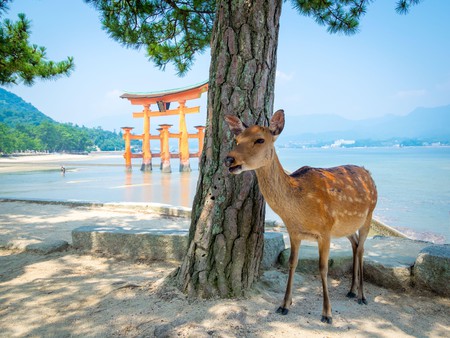 Two days is enough to see the highlights in the city centre. However, you will need another full day to visit the island of Miyajima and its temples, home to that Instagram-famous orange torii gate rising from the sea.

Where to stay in Hiroshima as a solo traveller

Given Hiroshima’s history and the fact that it was almost entirely destroyed in the 1940s, you won’t find much in the way of old buildings. So rather than seeking out a ryokan (a traditional Japanese inn), make for one of the modern hotels in the city, many of which are Japanese chains aimed at business travellers. Aim to book into one of the following districts. 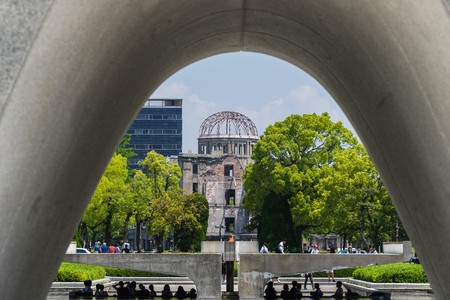 If you’re a first-time visitor, and especially if you’re only in Hiroshima for a short time, it pays to base yourself in this central district. All the must-see sights will be within walking distance – including the haunting shell of the Atomic Bomb Dome, photogenic Hiroshima Castle (rebuilt in its original 16th-century style in the 1950s) and the impressive Hiroshima Museum of Art, packed with Japanese and European pieces. 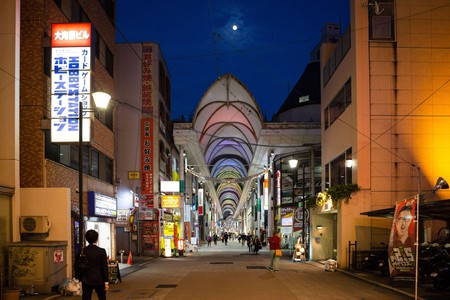 A thriving contemporary city, Hiroshima has an ace nightlife scene, and you’ll find plenty to fill your time after dark in Hondori. Just south of the big-hitter sights, it’s crammed with traditional Japanese izakaya pubs, okonomiyaki pancake restaurants and late-night drinking holes. By day, there’s shopping to entertain, in the form of the PARCO department store or vintage clothing spots. 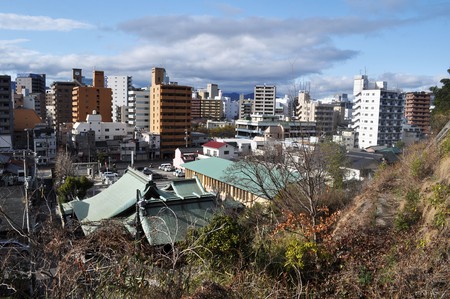 Want to combine city thrills with the green expanse of the great outdoors? This district in eastern Hiroshima is within easy transport access of the big sights but comes with the cherry blossom-carpeted Hijiyama peak and the surrounding park. There’s also the cool contemporary Hiroshima MOCA and a couple of observation decks. 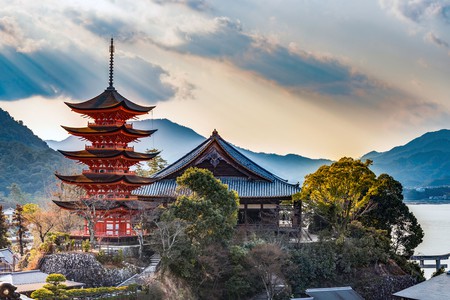 If you want to maximise your time on scenic temple-stuffed Miyajima island (also known as Itsukushima), it makes sense to base yourself here, about a half-hour outside the city centre. You can rise early to catch the first ferry over to the enchanting complex before the day trippers arrive and have the island to yourself at the end of the day, too.

For more ideas, check out our list of places to stay in Hiroshima.

What to do in Hiroshima as a solo traveller

As a modern city, Hiroshima has plenty to appeal to all kinds of travellers. But there are certain highlights that you cannot miss, including the following: 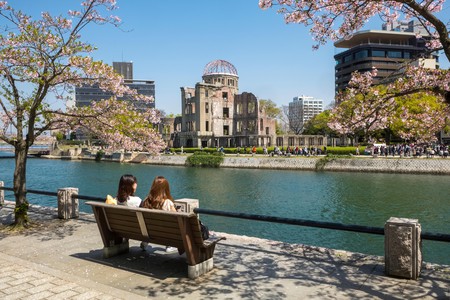 Exploring the epicentre of the 1945 bomb blast – from the haunting frame of the Atomic Bomb Dome at ground zero to the salvaged relics on display in the nearby memorial museum – is a moving experience you’ll never forget. You’ll learn about what happened on that terrible day, the lasting effects on the city and residents, and how Hiroshima has led the movement for peace and nuclear disarmament worldwide ever since. 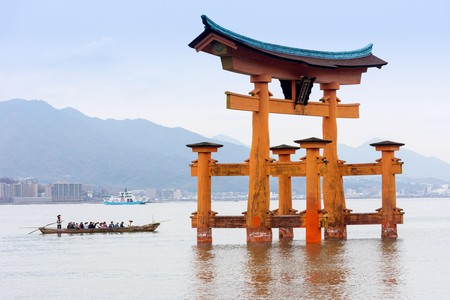 If the name doesn’t ring a bell, a photo will – Miyajima is home to that postcard-perfect orange torii gate that seems to grow straight out of the water. There’s much more to this temple-speckled island than this photo op, though. Explore the historic buildings, take a cable-car ride up Mount Misen and watch cute deer wandering the hiking paths. Visit the island when you join Culture Trip’s 12-day small-group adventure Japan Rising: From Neon Lights to Rural Ryokans. 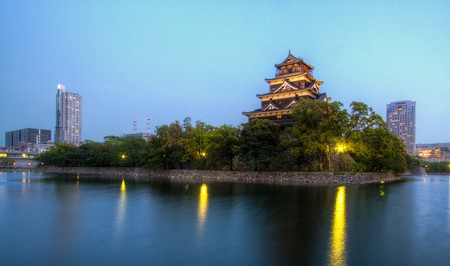 Hiroshima Castle is a 1950s reconstruction of a 16th-century castle, complete with a moat | © Agustin Rafael C Reyes / Getty Images

A faithful 1950s reconstruction of the original 16th-century castle, this museum will give you a good sense of what regal life was like in feudal Japan. It’s surrounded by a moat and trees – including many cherry blossoms, which means the grounds turn into a haze of pink come spring. Inside, discover the museum detailing the history of Japanese samurai families.

Eating and drinking in Hiroshima 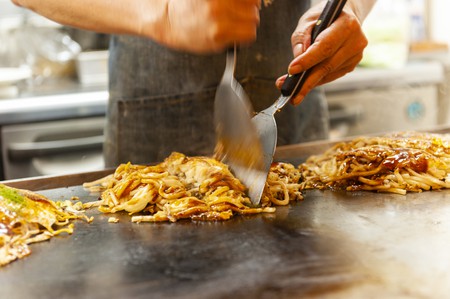 The most famous dish in Hiroshima is a version of okonomiyaki – a savoury, hearty pancake stuffed with cabbage and seafood or meat – that also contains egg noodles. Some restaurants will prepare the entire dish for you, but it’s also easy to find DIY spots where you can sizzle it for yourself on a hot table grill. Look out for okonomiyaki featuring oysters – another Hiroshima speciality.

Like most places in Japan, Hiroshima has its own dedicated sweet – momiji manjū. This dense maple leaf-shaped cake is stuffed with red-bean paste, green-tea flavouring, chocolate or other sweet pastes.

As they are everywhere in Japan, taxis can be expensive. It’s especially pricey if you are visiting Miyajima for the day, so be sure to get the last train back to Hiroshima to avoid getting stuck with a hefty fare.

Getting around in Hiroshima as a solo traveller 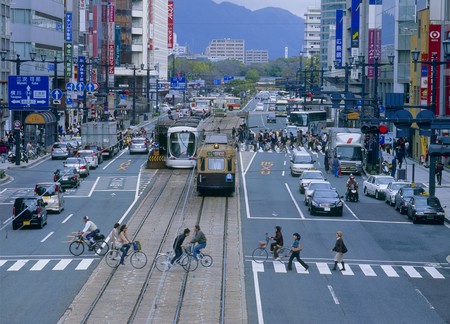 Riding the cute tram system is part of the fun of a visit here. Keep an eye on the screen that tells you how much to pay, based on your destination. You hand over the appropriate amount when you disembark – not when you get on. 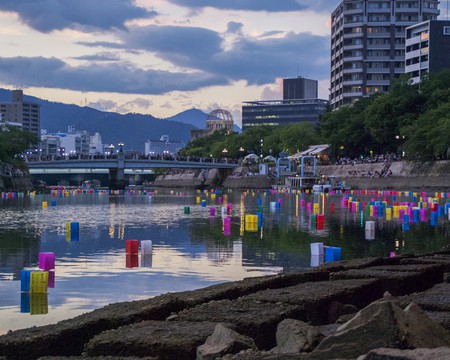 Every year on 6 August, Hiroshima marks the anniversary of the atomic bomb with a morning ceremony. Visitors from around the world are welcome to attend the event to pay their respects and promote world peace.