A History Of Awa Dance Festival In 1 Minute 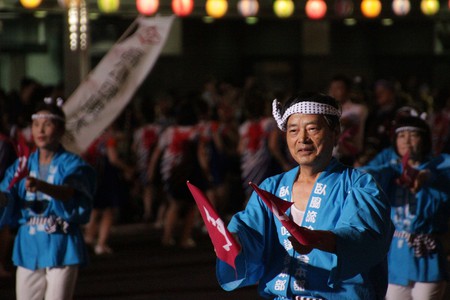 Welcome to the Awa Odori, the largest dance festival in Japan. Held annually in Tokushima City on Shikoku as part of the Obon festival, the Awa Odori dancers attract over one million tourists each year as they chant, sing and dance in costume, parading through the streets of the prefecture’s capital.

Tokushima has long been famous for the sheer scale and exuberance of its Obon festivities. The Awa Odori has its roots in the Buddhist ceremonial Obon dances of the Kamakura Period (1185-1333), although the term “Awa Odori” (awa is the feudal name of Tokushima Prefecture, and odori means dance) was not used until much later.

According to legend, the Awa Dance Festival officially began in the late 1500s, when Lord Hachisuka Iemasa wanted to celebrate the opening of Tokushima Castle. After much sake and celebration, the townsfolk began to form a disorderly parade through the streets while others sang and played music. However fun this story may be to believe, it’s much more likely that the Awa Odori or Awa Dance Festival was not regarded as distinct from the Obon dances until the Showa Period, when authorities first coined the phrase “Awa Odori” and began promoting the annual dances in order to draw tourists to the region. 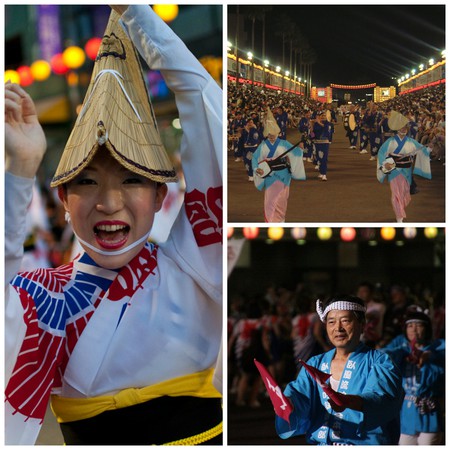 Today, the dance styles remain close to their ancient roots. During the day, spectators can observe the artfully choreographed nagashi dance. But at night, the city truly comes alive, as costumed dancers perform the energized zomeki dance – and audiences are strongly encouraged to join in on the fun.

The Awa Odori has been such a success that other, smaller Awa Dances are held throughout Japan. Kōenji, an area of Tokyo just west of Shinjuku, is home to Japan’s second-largest Awa Odori Festival. So now even those unable to attend the original event in Tokushima can get a little taste of it in Tokyo.