A Guide to Japan's 9 Weirdest Festivals 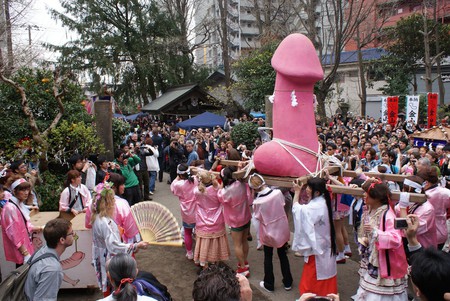 Japan is a country of festivals, no matter the time of year you visit there’s a celebration happening somewhere. With so many festivals (known in Japanese as matsuri) there’s bound to be a few strange ones. Here’s just a handful of the more ‘unique’ festivities you can witness next time you are in the country.

When: Third Saturday in February
Where: Okayama
Also more colloquially known as ‘the naked festival’,Hadaka Matsuri is one of the country’s most infamous celebrations, no prizes for guessing why. Held in Okayama, capital city of Okayama Prefecture the event sees nine thousand men wearing only loincloths gather to battle it out in the during the freezing Japanese winter, in the hope of acquiring a pair of lucky sacred sticks. These sticks are tossed into the heaving mass of almost naked bodies by a priest. Legend has it that the one who manages to get the sticks is coined the ‘lucky man’, and is blessed with a year of happiness. The event dates back around 500 years, when it was once a New Year’s good luck tradition.

When: Late July
Where: Furano
A little younger than most other festivals, the Hokkai Heso Matsuri aka The Belly Button Festival was founded in 1969 as a initiative for the people of Furano, a city in Hokkaido, to unify. Geographically the population of the area is spread across a large mass of land, so the city needed a reason to gather. So what better reason than to celebrate the bellybutton? In its early days the event struggled to gain momentum, in fact the first ever event reportedly saw just 11 people turn up. Over time however the humorous celebration saw a swell in popularity and today thousands gather to admire the show which features dancers who have painted their bellybuttons to look like a face.

When: Late February
Where: All across Japan
The name setsubun literally means ‘seasonal division’ however over time this celebration has been more commonly known as ‘bean throwing festival’. It’s a time for people to rid themselves of all the evil of the previous year and scare away disease-bringing evil spirits for the year to come, it’s like a traditional new year’s ritual of sorts. In Japan springtime is considered the time of fresh beginnings. Essentially the festival custom consists of festival-goers throwing roasted soybeans and chanting “in with fortune! Out with evil”. Often the celebrations begin in at home and move out onto the streets and towards the shrine grounds which are lined with performers and parade marchers wishing for a healthy and prosperous new year.

A post shared by DestinAsian Indonesia (@destinasianindonesia) on Oct 12, 2017 at 5:18am PDT

When: Early April
Where: Kawasaki
Probably just as infamous as Okayama’s nude celebrations is Kawasaki’s penis festival also known as the ‘Festival of the Steel Phallus’. As the name suggests this event is all about the penis. Centred around the local penis worshipping shrine, Kanayama shrine in Kawasaki, a city located between Tokyo and Yokohama, its story is as interesting as the event itself. History says that a long time ago a sharp-toothed demon lived inside the vagina of a young woman whom the demon fell in love with. The demon, jealous of the woman’s lovers, bit off the penises of the woman’s romantic interests. In order to fix her issue, the young woman sought the assistance of a local blacksmith who created an iron phallus to trick the demon and break his teeth. Over time the shrine also because popular with sex workers who visited to pray for protection against sexually transmitted diseases. Now a major tourist attraction, the festival was founded in 1969 and raises money for HIV research.

When: Third Sunday of December
Where: Mt Atago
The humble Atago Shrine, located on Mt Atago in Ibaraki prefecture seems like the last place you’d witness a yelling match, however on the third Sunday of December the scene around the shrine is enough to make you blush. In celebration of Akutai Matsuri aka ‘The Cursing Festival’, locals and visitors make their way to the sacred grounds to swear and cuss until their vocal chords give out. Who are the targets of this verbal tirade? 13 priests dressed up as tengu, a mythical red demon with a big nose. The event was founded during the Edo period as a way for stressed-out and overworked garment workers to let off steam. These days the event draws a variety of visitors cussing in a rage of different tongues, the most popular words are still “bakayaro” (idiot) And “konoyaro” (bastard).

When: Once every six years in April and May
Where: Lake Suwa
A little more dangerous than swearing and bean throwing, the Onbashira matsuri held in Lake Suwa, Nagano is all about risking life and limb. The event sees locals drag and carry enormous logs over unforgiving terrain all completely by hand with the assistance of nothing more than thickly braided ropes and gravity. The festival is split into two parts two parts, Yamadashi and Satobiki. The first part, Yamadashi, is focused on the cutting down and dangerous transporting of the logs. It also involves teams of men riding the logs down the hill which is as dangerous as it looks. Participants are often injured and occasionally killed during the festivities. The second part of the event, Satobiki, is just as nerve wracking. During Satobiki the logs are hoisted into the air and participants again ride atop the logs singing traditional festive songs. The purpose of the event is to symbolically renew the local buildings at the Suwa Grand Shrine.

When: Early September
Where: Miyakojima-shi
Did your parents ever threaten that monsters were coming to get you if you didn’t behave? Well then just be thankful you didn’t grow up in Miyakojima-shi city in Okinawa, because here is where all your childhood nightmares come true. During Paantu Punaha festivities locals dress up as the incredibly spooky Paantu, a supernatural being covered in mud and foliage. Their aim is to cover everything they see in mud, including bystanders. The event’s activities are all a form of exorcism, an attempt expel evil spirits and bring good fortune to the town and its people.

When: New Year’s
Where: Oga City
Feel sorry for the kids of Oga City, in Akita, because during New Year’s a creature like Paantu is the least of their worries. On New Year’s eve the city of Oga is overrun by Namahage, the truly terrifying monsters who live the neighbouring mountainsides. A tradition that’s been passed down since ancient times, the Namahage Festival sees local houses visited by locals dressed up in large masks and straw raincoats to ask residents whether their children have been behaving, because if not, it’s off to the mountains for them. In order to appease the menacing creatures the head of the household offers the Namahage mochi (rice cakes) and assures them that the children have been good, and will continue to be so in the next year. It’s a pretty extreme way to keep the children in line, but it’s probably a lot of fun.

When: April
Where: Asakusa, Tokyo
Hosted in one of Tokyo’s most iconic religious sites, Sensoji Temple in Asakusa is one of the cutest and weirdest festivals in the whole nation. Known as ‘the baby crying festival’ Naki Sumo is all about making babies cry. Though making their baby cry is probably one of the last things parents want to do, this event stems from the ancient proverb “naku ko wa sodatsu,” which means “crying babies grow fat” and is a way to bless the screaming little ones with good health. It’s also said to scare off any demons that may be lurking. What happens during the ceremonies, is that sumo wrestlers are handed participating babies on a stage set up near the shrine and attempt to make them cry, by wearing masks or chanting ‘cry, cry, cry’. Once they’re crying, the parents have the hard job of trying to fix the aftermath of a traumatised tot.

Japan's traditional Crying Baby Contest (Naki Sumo) was held on Monday at a Shinto shrine in Yokohama, near Tokyo. The contest takes place every year and pairs up little toddlers with sumo wrestlers who will attempt to get the babies to cry. The toddler who cries the longest and loudest is crowned the winner. #Japan #traditional #crying #baby #contest #nakisumo #shinto #shrine #Yokohama #Tokyo #toddler #sumo #wrestler