A Culinary Guide to Japan's Cities 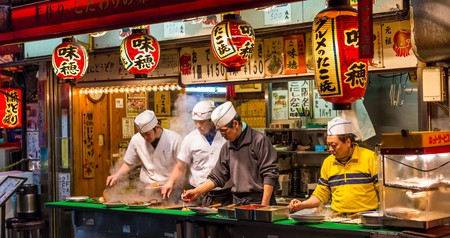 There’s more to Japanese cuisine than you might think. Learn all about the country’s delicious local foods in this culinary guide.

Culture Trip and On The Go Tours travel across Japan in search of the seasonal recipes and unusual cooking methods typical to each region.

Known as “the nation’s kitchen”, Osaka is home to a wealth of tasty street foods, but the favourite is takoyaki. These piping hot orbs of octopus, batter and pickled ginger are coated in mayonnaise and sauce before being topped off with a sprinkling of bonito flakes. Dotonbori, a bustling riverside district lined with food stalls, is where to go for this snack. Make sure to let them cool for a few minutes before eating. 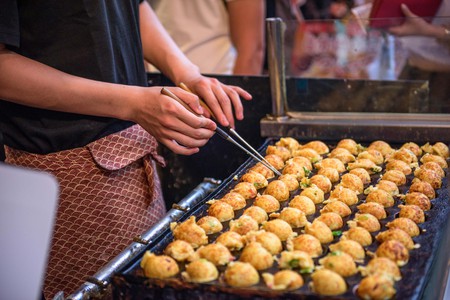 Modern-day Kyoto still places a great deal of importance in the traditions of eras long gone. Kyo-kaiseki, a dish that embodies washoku, or “traditional Japanese cuisine”, is a perfect example of this. A banquet-style meal consisting of many small portions of food all served on separate plates, it’s made from local seafood, seasonal vegetables and rice. Though formerly served in imperial courts, kaiseki can now be enjoyed all over Kyoto at restaurants like En and Yoshikura. 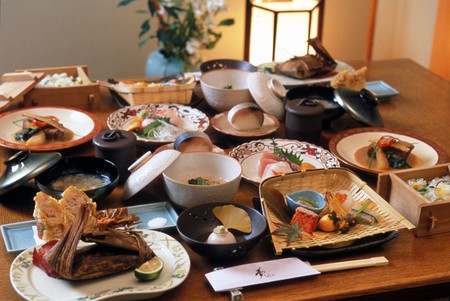 Kyo-kaiseki in Kyoto | Courtesy of JNTO

Tokyo is the birthplace of perhaps the most recognizable Japanese food, nigiri sushi. Consisting of a slice of raw fish on a compact bed of rice, this version of sushi originated as a local fast food in 19th-century Edo. It became popular worldwide after being introduced in the US in the 1960s. Head to Tsukiji Fish Market to try the freshest sushi in the city. 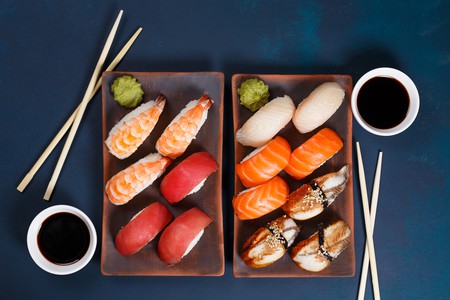 Shirasu is a small white sardine popular in the bayside towns of Kamakura and nearby Enoshima. They can be served boiled, dried or raw, and are in season from April until December. Many Kamakura restaurants serve shirasu that’s caught fresh every morning; if you’re visiting, make sure to try shirasu-don, a fish and rice bowl, at a place like waterfront restaurant Enoshima Koya. 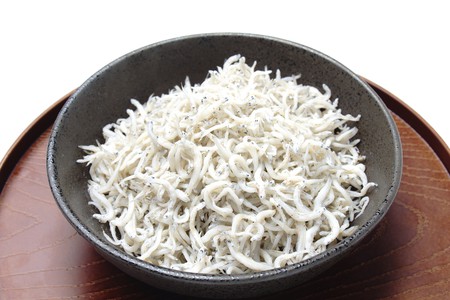 Hakone is particularly famous for two things: breathtaking views of Mt. Fuji and relaxing onsen (hot springs). Make the most out of your onsen experience by sampling the infamous kuro tamago (black egg), hardboiled in the springs themselves! The egg shells turn black due to a chemical reaction with the iron and sulfur in the water, and are said to improve your health and luck… as long as you don’t eat more than three! Get them at Tamago Chaya. 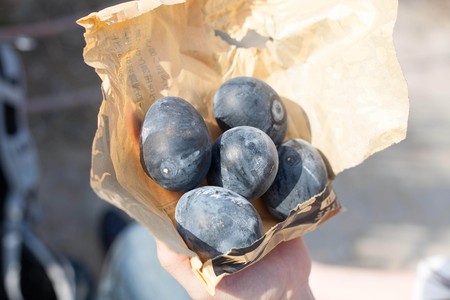 Don’t make a trip to the festive town of Takayama without stopping to snack on gohei mochi at one of the many street stalls. This sweet treat, often used as an offering in shrines, is made of white rice pounded into a cake that is skewered, covered in a sweet sesame sauce and grilled. Try it at the historic Fukutaro, where the owners make the dish using rice they farmed themselves from their paddy fields. 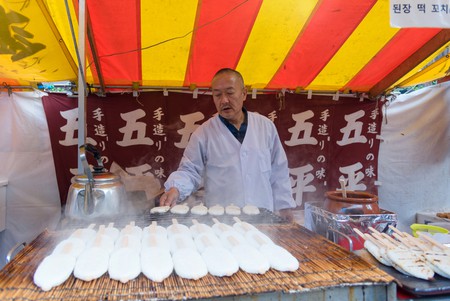 Oden is a popular winter dish where various ingredients like eggs and vegetables are stewed in a broth and eaten with hot mustard. Himeji’s white version is served with ginger and soy sauce, and is often flavoured with sake lees (the area is Japan’s largest producer of the beverage). Try it at Teishu, just outside of Himeji Castle. 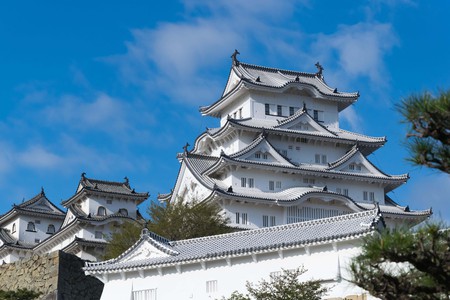 Beautiful Miyajima is home to one of Japan’s most famous snacks, the momiji manju. Momiji is Japanese for “maple leaf” which is what the sweets are modelled after. The fluffy cakes are traditionally filled with anko (sweet red bean paste), but other varieties use fillings like matcha, chocolate and custard. Momiji manju were created in Miyajima to celebrate the local fall foliage and can still be found at Iwamura Momijiya, one of the first shops to ever sell the treat. 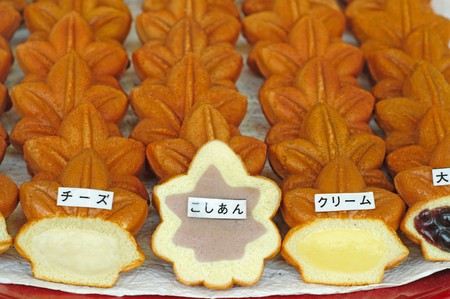 Okonomiyaki is a popular national dish, but Hiroshima has made its own version nicknamed Hiroshima-yaki. Cabbage, batter and pork, the main ingredients, are typically mixed together and then grilled, but the Hiroshima-style consists of layered ingredients, creating a delicious tower. People visit from all around the country just to try this version, and there are even entire dining complexes dedicated to the dish. 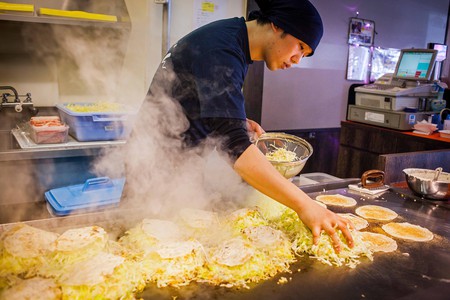 During the Edo period Tsumago was a place where travellers rested while commuting on foot between Kyoto and Tokyo on the Nakasendo route. Visitors are drawn to the town’s well-preserved architecture, but it’s an unusual local dish that makes the trip memorable. Hachinoko are wasp larvae marinated in sugar and soy sauce, typically eaten on their own or over rice. You’ll find the dish is sweet and crunchy… if you can get past your squeamishness. It’s also quite expensive, as the larvae are rare and extremely difficult to harvest, but you can buy them at a local supermarket or try them while staying in a ryokan. 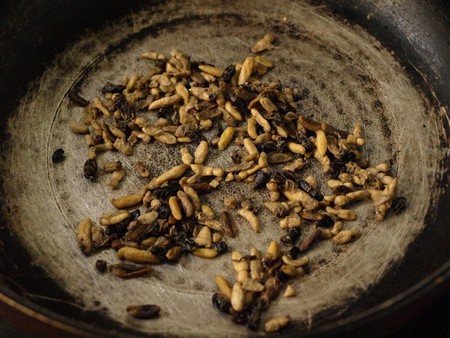 The historic and scenic town of Matsumoto is home to sanzoku-yaki, a name which translates to “mountain bandit-style chicken”. These marinated and deep-fried chicken thighs can be found at festivals and almost any izakaya in town. Sanzoku-yaki is much larger and crunchier than karaage – Japan’s typical fried chicken – and only made in Matsumoto. 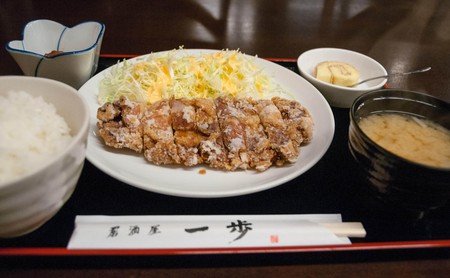 The most famous dish in Nagano is Shinshu soba, a type of noodle made out of buckwheat. The city’s mountainous terrain is the perfect environment for cultivating buckwheat, the fertile soil giving the grain an earthy taste. Shinshu soba is traditionally served cold with dashi (a Japanese broth) for dipping, however is sometimes served hot. Head to Kaya, a restaurant located in a former sake brewery, to try a handmade version of the dish. 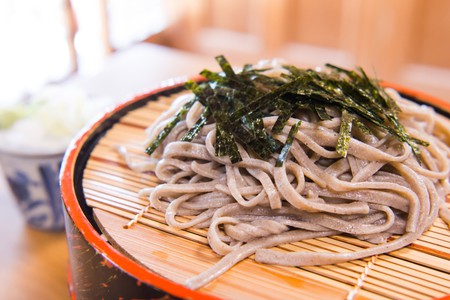 The winters in Hokkaido’s capital Sapporo can be brutal, but luckily, the locals have concocted a number of ways to combat the chill; one of the best is a hot bowl of corn butter ramen. While hard to find in other regions, this recipe is ubiquitous in Sapporo and its surrounding areas. Head to nightlife district Susukino and take a walk down Ramen Yokocho (Ramen Alley) to find an authentic restaurant serving this warm and filling meal. 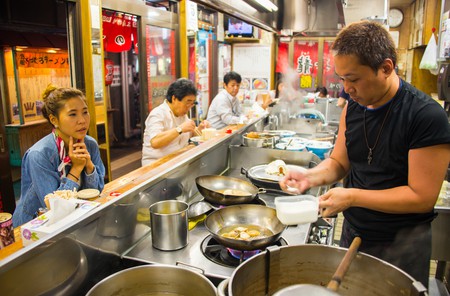 A man cooks ramen to serve to his customers in Sapporo, Japan. | © Vassamon Anansukkasem/Shutterstock