A Complete Neighbourhood Guide to Koenji 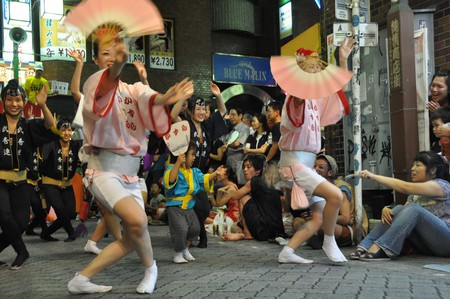 Kōenji, located not too far from the bustling street of Shinjuku, is a smaller city in the suburb of Tokyo. Its laid-back attitude and consciously anti-modern approach has made the area a creative haven. If it’s cool clothes or a night bar hopping you’re after, Kōenji is a fail-safe option.

This youth-filled pocket of Tokyo has increased in size over the years as people looked for somewhere close to the city but inexpensive to rent. Because the area was relatively untouched during the 1980 building boom many of the stores and venues throughout the area have an ‘old world’ feel. The year 2006 saw the Japanese PSE law come into effect which restricted the sale of electronic goods built before 2001. Due to its active “retro” culture and used equipment shops, Kōenji was chosen as the site for a protest against this anti-thrift law.

Kōenji station is one of the more populated stations outside the major hub of Shibuya and Shinjuku. Servicing the JR Chūō Line (Rapid) and the JR Chūō-Sōbu Line, it’s just a few minutes direct from Shinjuku station and even closer to other popular hubs like Nakano. If you’re travelling from Shibuya, you’ll have to catch the Yamanote to Shinjuku and make the switch to the Chūō lines there. One fun fact about this station is that during the popular Kōenji Awa Odori festival (held in late August), the station features a very unique train departure melody to team with the area’s festive energy.

Like its sister suburb of Shimokitzawa, Kōenji is a thrift store haven. From cheap outlets jampacked with pre-loved clothing to meticulously organized designer and vintage stores you’ll be able to find it all here. For eye-catching brightly colored menswear check out the friendly little outlet of Hayatochiri for those one-of-a-kind pieces. For something more classic and comfortable visit Now or Never the easy to wear outlet which regularly updates their blog with their latest items.

Known as the city’s unofficial home of punk Kōenji is one of the best places to see live music in all of Tokyo. For more a more unconventional live music experience you have to check out DOM Sound Studio. Located not too far from the station, DOM is by day a rehearsal studio, and by night a live music haunt. With their room for rental service bands of all ilk throw parties here many nights of the week.

It’d almost be a crime to visit the hometown of punk without out checking out a local punk show. So be sure to visit UFO Club located near Higashi-Kōenji Station. A regular drop in for both upcoming bands a local legends, this live space is a hub of musical creativity and enery.

One of the biggest social and spiritual events on Kōenji’s calendar is the annual Awa Odori, a traditional festival with roots in Buddhism. Originally held in Tokushima City on Shikoku, the event has become so popular throughout the nation that there’s now a smaller scale version in Kōenji. During Obon (a national holiday week in August) thousands flock to the suburb to witness classic dancing, enjoy traditional matsuri (Japanese festival) food and party all day into the evening.