A Cold of the Soul: Depression in Japan 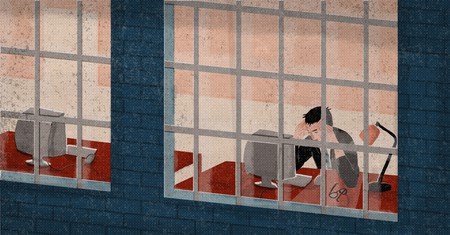 Until the 1990s, depression was not recognised as a legitimate condition by many people in Japan. Things are changing, but are they changing quickly enough?

Every day, roughly 60 people take their own life in Japan, an average of just over 21,000 a year. For every suicide, it is believed that there are another 25 attempts.

These figures, released last year by the Japanese counselling and support service Tell, look alarming – and they are. In a country of 127 million people, nearly one in four people have considered committing suicide. Yet think of this: in certain ways, things are actually improving in Japan when it comes to mental health. Over the last decade or so there have been enormous breakthroughs in recognising and treating symptoms of depression and anxiety among Japanese people. Suicide figures remain startlingly high, but it’s estimated that 20 years ago, 90 people were taking their own life each day.

The influence of Japan’s cultural framework

How can we explain this shifting picture? Japan has a complex cultural framework with firmly established values and expectations which, over the years, has contributed towards making it a nation with one of the highest rates for suicide in the world.

For one, the country’s work culture means that labouring to the point of physical and mental exhaustion is seen by many as the norm – death (including suicide) that is linked to overwork even has its own name: karoshi.

Moreover, it is considered a priority in Japan to maintain a friendly, happy and professional exterior at all times, whatever the cost. This aspect of the culture can be seen everywhere, from McDonald’s adding free smiles to their menu, to Japanese train workers taking a smile test to keep customers happy.

Then there’s Japanese spirituality. Suicide has not traditionally been treated as a sin in Japan. There exists a concept in Zen Buddhism called gaman, or the virtue inherent in one’s ability to endure the unendurable. Even as recently as the early 20th century, Japanese monks in the Shingon Buddhist sect were mummifying themselves while still alive as a means of spiritual purification. From the ancient Samurai to the kamikaze pilots of World War II, suicide was considered, if anything, an honourable way to take responsibility for one’s actions – witness the case of former agriculture minister Toshikatsu Matsuoka, who in 2007 hanged himself during an investigation into an expenses scandal. And it’s worth the remembering the story of Masabumi Hosono, the only Japanese passenger aboard the Titanic, who was treated with scorn and derision when he came home, for his decision to fight for survival rather than die with his fellow passengers.

Isolation and loneliness are endemic across the country, particularly among men. Japan’s National Police Agency stated in 2010 that a quarter of all suicides in Japan are financially motivated – be it a case of karoshi, or salarymen facing financial pressures who use the insurance payouts from their sudden deaths as a solution.

In this cultural context, it is perhaps not so very surprising that it wasn’t until the 1990s that depression began to be recognised as a legitimate condition among medical professionals in Japan. For most Japanese, depression was something you did not speak about: someone who was depressive was seen as being that way for purely physical rather than psychological reasons. There was no medication; people were simply ordered to get some rest.

The coming of Prozac

Antidepressant medication was made available in Japan in the 1990s but the lack of awareness, coupled with a sense of shame or embarrassment about mental health issues, meant that there was no uptake. That all changed when a Japanese pharmaceutical company embarked on a new way to market Prozac; they created an ad campaign where depression was labelled a ‘cold of the soul’ that could be treated with tablets. People began to express interest in the drug. The number of diagnoses for mental health disorders in Japan doubled, and the market for antidepressants boomed; a shift was underway.

In 2006, the government passed a suicide prevention law, declaring the issue to be a social problem. Among other things, the act pledged to lower the suicide rate and to help the families of those who die by suicide. A number of high-profile incidents also fed into the zeitgeist – in 2001, actor Nana Kimoni spoke out about her postpartum depression. In 2004, the Japanese Royal Family admitted that Crown Princess Masako was suffering from depression. In 2008, a local government agency ruled in favour of the family of a chief engineer working for Toyota, who was found dead at the age of 45 from heart failure. He had put in 114 hours of overtime a month on top of his already gruelling schedule. The ruling meant that his family would be eligible for benefits from his work insurance.

Conversations about mental health were now firmly on the public agenda. Anime auteur Hideaki Anno, creator of Evangelion, has spoken publicly about the toll that the franchise took on his wellbeing. Nowadays, depression is almost seen as a fashionable ailment, with the Japanese media using it as a buzzword when discussing celebrities who experience it.

As attitudes towards recognising mental health issues have shifted, more resources have become available and support groups have begun to emerge. One of these is the aforementioned Tell organisation, which offers free, anonymous telephone counselling across Japan, daily between 9am and 11pm. Other such groups exist across the country, including specialist organisations like Youth LINK, which is comprised entirely of students and specialises in offering help to young people, among whom suicide is the largest cause of death in Japan. Not too long ago, accessing such services would have seemed unthinkable to Japanese people. In 2015, a new law was introduced requiring any company with more than 50 staff to conduct stress checks in the workplace.

But even as provisions and access to mental health care have improved, there are still persistent issues. A survey of over 4,000 people carried out in 2016 by the University of Tokyo’s Department of Mental Health discovered that “the most common reason for delaying access to help was the wish to handle the problem on one’s own”. There is still an ongoing issue in the media, which at times either sensationalises or misrepresents mental health-related stories.

Vickie Skorji, lifeline director at Tell, told Culture Trip, “While the number of suicides has gone down in Japan over the last 10 years due to a range of programs the Japanese government has introduced across the country, I would strongly disagree that there has been any significant attitude change or great awareness or understanding about mental health in Japan. It is this stigma and discrimination that people with mental health issues experience at all levels in society from family members, friends and the workplace that prevent them from talking about their health problems and reaching out to get support. They fear that it may affect their job or career and that people will judge them as weak or a failure.”

The role of the state

Skorji added that a compounding issue is that counselling or therapy is not available on the national health care system: “Currently, only an appointment with a psychiatrist is covered. This has resulted in the psychiatrists all having caseloads that are overloaded and only being able to offer 10 minutes on most sessions. This has led to people in Japan being overmedicated, which isn’t helping them to get better or remain functional in the community.

“However, the Japanese government is looking into this issue, with the hope of including counselling on the healthcare system in the future.”

In 2016, the suicide rate in Japan hit its lowest rate for 22 years. That same year, an amendment to the suicide prevention law of 2006 was passed, requiring local authorities to take preventive action. This, together with the emergence of groups like Tell and a greater overall willingness among the Japanese to come forward, are signs that the tide is slowly turning in helping people in Japan take greater control of their mental health.