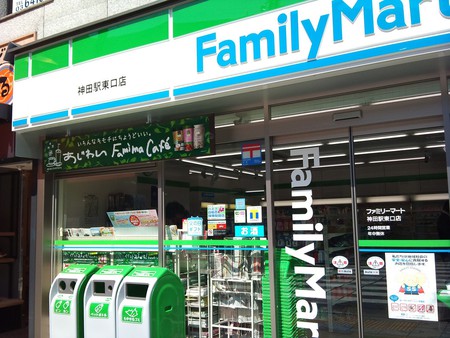 From cafés that can fulfil any need and desire, through to the many vending machines on every street corner, Japan is the ultimate nation of convenience. The humble konbini (convenience store), however, is the go-to option for those who are poor on time, space and money. Here’s your guide if you’re strapped for cash.

There’s no better way to start the week than with a longtime konbini staple: the humble and versatile onigiri. Potentially the best way to explain onigiri is that it’s the Japanese alternative to a sandwich. Fist-sized rice triangles covered in crispy nori seaweed and stuffed a variety of fillings (from seaweed, to salmon eggs, to chicken). The flavour combinations are almost unlimited and at around 120 yen ($1USD), are very affordable.

Lunchtime is all about nikuman, also known as steamed buns. As winter draws closer the warm food options at most of the major konbinis starts to grow, and one of the stars on the menu is the variety of steamed buns on offer. From pork, to pizza flavored, to curry and even sweet bean filling, there’s something for every palette. These guys will set you back around 120-200 yen ($1-2USD) each and are incredibly filling.

As the day rolls on and you’re feeling peckish it’s time to make dinner. However, like many tired salarymen, cooking is the last activity you want to endure. Consider picking up a tray of refreshing and delicious soba noodles. With just a sachet of water to separate the noodles and another small sachet for dipping sauce, the involvement in preparing this dish is essentially as minimal as you can get, and for around 350 yen ($3.00 USD) it’s a bargain.

When you’ve got a lot to do, sometimes breakfast on the go is the best option. Considering that eating on the street is still a bit of a social faux pas here in Japan, breakfast in liquid form is the most socially acceptable decision. Lucky your reliable konbini stocks a variety of yogurt drinks that are both tasty and filling. At around 200 calories a drink they’ll give you plenty of energy to keep you fueled up until lunch, and they’ll only cost about 150-200 yen ($1 – 2 USD).

Breakfast was light, so no doubt by lunchtime you’ll be after something a little heartier. For lunch head to the refrigerator section and grab a cheesy rice gratin. Tasting like a warm hug, this rice-based cheese-covered dish is a lot tastier than it looks, and can be warmed in the microwave on site. It’ll cost about 350-400 yen ($3-4USD) depending on where you go.

Dinner calls for a little experimentation, so try the infallible noodle-salad-and-soup combo. In the cold aisle you’ll be faced with an array of colorful and fresh cold noodle salads, from shrimp to chicken, to purely vegetarian. The price will depend on your selection, but as a general rule the sits at around 300-400 yen ($3-4USD). Once you’ve made your choice check out the cup soup section to pick your noodle partner. If the options seem too overwhelming (which they can!) go for a classic miso soup, it’s pretty healthy and incredibly cheap 100 yen ($1USD).

Melon pan is an incredibly popular and addictive snack in Japan, in fact its so popular there’s a famous character dedicated to the treat ‘Melonpanna’. Melon pan is a sweet soft bread with a crisp outer that looks like a melon but actually comes in a variety of flavours, and the best bit is they cost around 100 yen ($1USD) each.

One onigiri meal a week isn’t enough, so for lunch get adventurous and try a flavor you haven’t yet explored. For those who aren’t so keen on fish, the egg option is a safe bet. Also, the mini omurice onigiri is the unlikely but delicious combination of tomato sauce and egg.

For a $1.15 USD, you can enjoy this egg, rice and ketchup snack from 7-Eleven. Not pictured is the gooey egg center. 🤓🍙🍳 #superstreetjapan #7eleven #711japan

As well as an impressive noodle selection, Japanese konbinis also stick a huge range of spaghetti plates that legitimately hit almost restaurant quality in terms of taste and appearance. Though neapolitana and carbonara are the two main spaghetti staples, there are fancier options too like clam spaghetti alle vongole all for the price of about 400 yen ($USD). You can grab a plate and get it heated up on site.

After a few visits to the konbini, chances are the brightly coloured glazed donuts sitting by the register have caught your eye, to today is the time to indulge. Nothing goes better with donuts than coffee, which you can of course also grab fresh from most outlets. A coffee-and-donut combo is going to cost about 300 yen ($3USD) – not too bad.

Time to revisit the soup aisle for lunch. Cup noodles are such a Japanese fast food staple that they take up almost one quarter of the aisles in many small-to-regular sized konbinis. Though there’s every flavor imaginable on offer, look out for the bold white Nissin company Cup Noodle cups. Known as the original Japanese cup noodle, the most classic flavours are ‘classic’, ‘seafood’ and ‘curry’, however the company did release a Squid Ink Black Seafood Cup Noodle earlier this year too! They’ll cost around 150 yen ($1USD) and are really filling.

For dinner it’s udon. Like its thinner buckwheat based cousin soba, konbini udon is ridiculously easy to prepare and costs your pocket change. You can pick up a prepared udon for about 300-400 yen ($3-4USD) and get it warmed up in store.

It’s nearly the weekend, so time to celebrate with a cheeky treat breakfast, and there’s nothing better than a fruit sando aka fruit sandwich. As fresh bright pieces of kiwi and strawberries sandwiched between cream-covered slices of white bread, it’s a snack that sounds like it shouldn’t work but it does! Given that fruit in Japan tends to be a little more expensive, this breakfast will set you back about 250-300 yen ($2-3USD).

Previously you’ve tried the cold noodle salad, so now it’s time for the crispy alternative. Like the other dish, this lunchtime dish comes in a variety of options, but chicken is probably the most common. The best bit about this dish is that your noodles and vegetables are separated by a thin plastic sheet, keeping your noodles crisp and your salad untouched.

Welcome to the best place on earth #konbini #コンビニ

As the months get colder there’s one familiar site in konbinis across the nation, and it’s the steaming hot open pots of oden often situated by the register. A winter staple in Japan, oden is a pot dish consisting of several ingredients like boiled eggs, tofu and fish cakes that simmer in a light, soy-flavored dashi broth. For a few hundred yen (depending on what you get) it’s the ultimate comfort food.

It’s the weekend, so really time to treat yourself. Some of the konbini’s best snacks and dishes you haven’t tried yet would be yakisoba pan which is the unlikely combination of fried noodles in bread. The Anthony Bourdain-approved egg sandwich and of course the ubiquitous karaage (fried chicken) are on the menu. Also, if you’re planning on partying, be sure to check out the konbini’s impressive selection of booze which puts many other liquor stores to shame.

My last super soft egg sandwich 😭Love how the filling goes to each edge, and no crust means no wastage 😍