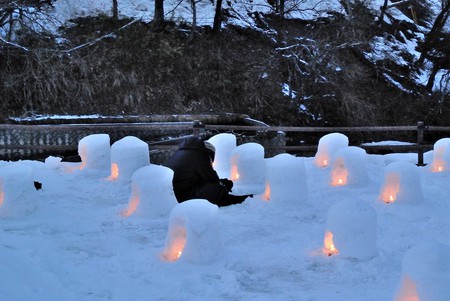 The Yokote Kamakura Matsuri, also known as Yokote Snow Festival, has been an annual tradition in Akita Prefecture for nearly half a millennium. In this case, kamakura refers to the snow huts that are the highlight of the festival. We take a closer look at the Yokote Kamakura Festival and how it developed from an ancient Japanese New Year tradition.

Since the Heian Period, at the beginning of ever year, the shrines and temples of Japan have hosted ceremonial tondoyaki. These bonfires are for the sole purpose of burning last December’s New Year’s decorations. People also bake mochi (glutinous rice cakes) over the flames. Eating them will bless you with good health for the New Year. It is thought that this tondoyaki ritual is what the Yokote Kamakura Matsuri was born from. 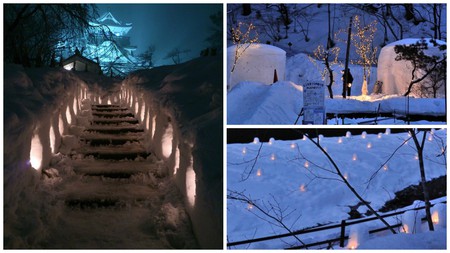 Hundreds of years after the Heian Period and the first tondoyaki, the Yokote Snow Festival began to take shape. During the festival, the snow huts known as c spring up all over Yokote City in Akita Prefecture. Inside, children toast mochi over a fire and invite passersby in for a drink of sweet sake. The purpose of the festival is pray to the water gods for clean and pure water, and altars are set up for this purpose inside the kamakura.

A full-size kamakura can comfortably seat several adults inside. In addition to these, hundreds of decorative miniature hollowed snow mounds line the ground of places like Yokote Minami Primary School. Inside, glowing lamps create the unforgettable winter landscape that this festival has become known for.