A Brief History of the Japanese Kimono 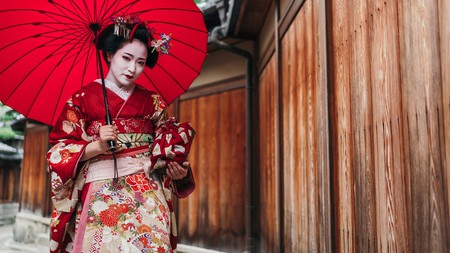 Much can be expressed through a kimono’s design, styling and colour, like for the Maiko geisha in Kyoto | © Juri Pozzi / Alamy Stock Photo

Perhaps the most recognisable Japanese article of clothing, the kimono’s humble beginnings date back over a thousand years, to the Heian Period. Although it is no longer an everyday choice, this traditional garb is still worn for special occasions, such as weddings, funerals and tea ceremonies. Read on to explore its history and role today.

The history of the kimono

Clothing similar to the modern-day kimono started being worn during the Japanese Heian Period (794-1185). It was often worn with the Chinese-influenced hakama (a type of long skirt with or without a division to separate the legs, similar to trousers), or a type of apron known as a mo. Later, it became fashionable to wear the kimono-style garment without the hakama. This meant the wearer needed a new way to hold the robe closed, and so the obi (the wide sash worn around the waist) was born.

By the Kamakura Period (1185-1333), the kimono had become an everyday clothing choice, and layering came into fashion. It is thought that this is when the traditional Japanese colour combinations were first experimented with; the colours were based on seasons, gender or sometimes on political and family ties. The art of kimono-making grew into a specialised craft during the Edo Period (1603-1868), and some kimonos were literal works of art and could cost more than a family home. People would keep their kimonos and pass them down to the family. 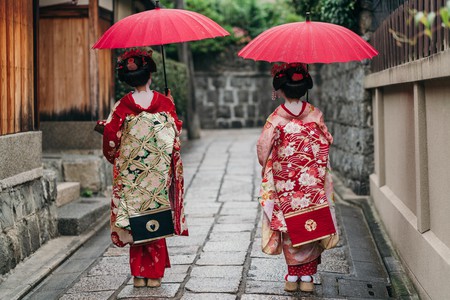 Kimonos were popular for many reasons, mainly for being versatile. They could easily be layered or altered to suit any season. Heavy silk kimonos could be worn in the fall and winter, while the light linen and cotton kimono, known as a yukata, could be worn in summer. The yukata is still commonly worn during seasonal summer festivals and fireworks displays (miyabi).

Since the Edo Period, men’s and women’s kimono fashions have remained pretty much unchanged. Eventually, however, the complexity of kimono-wearing and the cumbersome sandals they required became a hindrance. The kimono fell out of fashion during the Meiji Period (1868-1912), when the government encouraged people to adopt Western clothing styles.

Things you didn’t know about kimonos

Though kimonos are often handed down through generations, the garment can be extremely expensive, sometimes costing several hundred pounds. This is because it is traditionally made of costly materials such as silk and linen, but also because its seams and edges must be finished by hand. However, the most expensive options are usually reserved for special occasions, and it’s now possible to buy an informal cotton version (yukata) across Japan.

While kimonos appeal to fashionistas around the world, in Japan they are closely linked with manners and can reflect the formality of an occasion. Wearing the appropriate garment for the right event is a way of conveying respect and gratitude. Rank, formality and status can also be expressed through the kimono’s design, styling and colour and even the way the obi is knotted at the back. Kimonos should also always be worn with the left side over the right: only a dead body dressed for burial should wear the right over left.

The role of kimonos today

Though kimonos are indelibly linked with tradition in Japan, they have more recently become a cult fashion item around the globe. This coincided with a renewed interest in Japanese culture worldwide in the late 1990s. The kimono’s delicate patterns, sumptuous colours and striking silhouette suddenly appealed to a fashion-conscious generation who were keen to stand out from the crowd, especially on social media.

For some, wearing one offers a break from the norm, a chance to dress up and connect to a rediscovered history. For others, it is simply the opportunity to wear something breathtakingly beautiful and feminine, an alternative to a designer dress that might be spotted on anyone. In fact, many of its modern fans have never even visited Japan yet remain drawn to the kimono for special occasions.

Likewise, in Japan itself, the upsurge in kimono rental shops suggests more people are keen to rediscover this classic garment normally reserved for formal celebrations such as weddings. With a booming breed of young designers offering a fresh take on traditional styles and patterns, the kimono’s new fans are certain that the garment can still have a role in our everyday wardrobe, too.