A Brief History Of The Doge Meme

A meme transmits ideas, symbols, styles, and other cultural aspects from one person to another. The term has been around since 1976, but came to prominence again much more recently to describe, specifically, viral internet memes – those comical words, images, and symbols that are repeated again and again and spread rapidly through the net. The doge meme is one that became so popular that the word ‘doge’ came to refer to any dog with a resemblance to the meme’s star, a Japanese Shiba named Kabosu.

Kabosu was adopted by blogger and teacher Atsuko Sato in 2008. A purebred Shiba, a medium-sized dog breed originating in Japan, the breed comes in many colors, from a blackish sesame to a white cream, but the doge (and Kabosu) are always tan or red. Interestingly, the doge meme is not viral in Japan, and Atsuko and Kabosu are known as owners of one of the nation’s most popular pet-related blogs. Nevertheless, Atsuko is aware of them and finds the memes amusing.

Kabosu first appeared on the Internet in 2010, in a blog post by her owner Atsuko. The image featured a reclining Kabosu looking at her owner with a very un-doglike expression. This prompted the Tumblr blog Shiba Confessions to repost the image, adding the Comic Sans overlay that would become the doge’s signature. 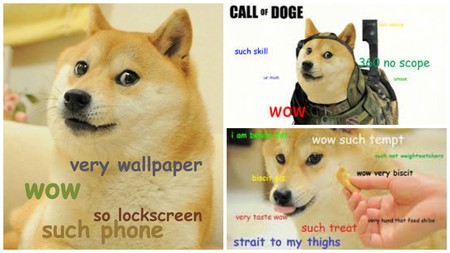 Doge’s popularity spiked in 2013 when users bombarded one of 4chan’s subreddits with the image – 4chan is an online imageboard mainly for Japanese otaku, culture, and anime content. Along with ‘wow,’ the meme almost always featured the words ‘so,’ ‘such,’ ‘many,’ ‘much,’ and ‘very’ – common English modifiers – along with a word they can’t properly modify, creating ‘doge grammar.’ The increased online searches for the doge meme didn’t escape the notice of Google, who created an Easter egg. When ‘doge meme’ was typed into the search bar, the font changed to Comic Sans in doge’s honor.

The doge meme made Meme of the Year on Know Your Meme in 2013. Since then, doge has been featured on apps, a Delta Air Lines safety video, public transport ads in Sweden, and even her own currency, the dogecoin. ‘Doge’ was added to Dictionary.com in 2015. While not as viral as she was the year she was on top, the doge meme will go down in history as one of the most memorable internet phenomena of all time.