A Brief History of Osaka Tenmangu 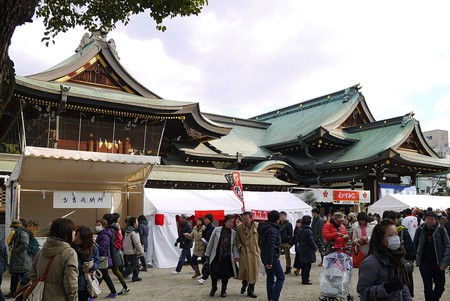 On most days, Osaka Tenmangu is a quiet and unassuming shrine tucked away among big city high rises. Though this means it tends to get overlooked by tourists, the shrine has over a 1000 year history and is one of the most important in the country. Read on to discover more about this fascinating place, which comes to life once a year for one of the three great festivals of Japan.

The Osaka Tenmangu shrine was erected in the year 949. It’s dedicated to one of the greatest scholars, poets, and politicians of the Heian Period (794-1185), Sugawara no Michizane. Though he was a prominent political figure for much of his life, he was later exiled after his rivals came to power. Following his death, alone on a faraway island, many calamities befell his enemies — to such an extent they believed they were cursed, so they deified Michizane to appease his vengeful spirit. Michizane became known as Tenman-Tenjin, the Shinto deity of literature and scholarship. Because of this, students often visit shrines dedicated to Tenjin (as he’s usually called) to pray for passing scores on their exams.

Osaka Tenmangu is just one of the many tenmangu shrines in the nation, but it has become the most important due to its impressive design and popular annual festival.

The unusual atmosphere and architecture

Osaka Tenmangu is located in the Tenma area of Osaka, which gets its name from the shrine. Its known simply as “Tenjisan” by the locals.

Though Osaka Tenmangu is surrounded by office buildings, and is adjacent to the longest shopping street in all of Japan, it’s rarely crowded. As such, it’s a calm and contemplative place to escape from the crazy city shops and streets. The grounds are fairly large and quite beautiful. Plum blossoms bloom in the early spring, drawing visitors. Plum was said to be the favorite tree of Michizane, so most Tenmangu shrines in Japan include them. 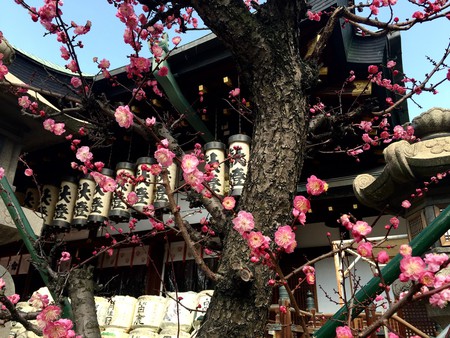 The architecture is known for its unique and unusual design. The main building resembles a Buddhist temple, but the many surrounding torii (shrine gates) give it away as a Shinto shrine. There is a famous houiban, a depiction of the Chinese zodiac as a wheel, located in the daimon (front gate). There are also many plum blossom motifs decorating the shrine buildings.

Like many historical Japanese buildings made of wood, Osaka Tenmangu has been destroyed by fires numerous times over the years. The current structures date back to 1845.

Osaka Tenmangu is the nexus of one of the largest celebrations in the nation. The Tenjin Matsuri, one of the three main festivals of Japan, is centered around Tenjin and this particular shrine.

Taking place every year on July 24 and 25, the entire city and then some suddenly comes out to the Tenma district in droves. Throngs of thousands gather, many wearing yukata and other traditional dress, to celebrate. There are food stalls lining the streets and carnival games to play, as well as massive displays of traditional culture. 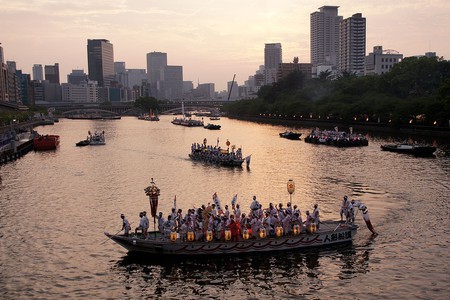 A procession of boats in celebration of the annual Tenjin Matsuri. | © 663highland / WikiCommons

On July 24, a ritual takes place at the shrine as preparations are made for a parade. On the following day, a procession bearing a likeness of Tenjin, carried in a mikoshi (palanquin), parades over land and water. Hundreds of people join this march, dancing and drumming in elaborate costumes. Then one hundred boats sail on the Okawa, making this the largest boat parade in Japan. There is also a huge fireworks display in the evening.

Once the festival is over, Tenjin is returned to his resting place at the shrine, and the atmosphere reverts from festive back to pensive and quiet. Yet, Osaka Tenmangu remains interesting year round!