A Brief History of Osaka Castle 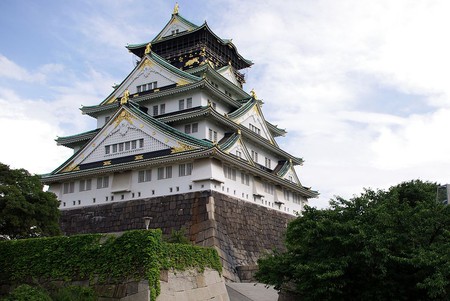 Osaka Castle is one of the most famous and historic castles in all of Japan. The iconic symbol of Osaka in the Kansai region of central Japan played an important role in the unification of Japan during the samurai era of the sixteenth century.

The current main tower at Osaka Castle is a concrete reconstruction of the 17th-century castle and was completed in 1931. In its original construction back in the 16th century, it was unparalleled as the largest and best constructed castle in Japan. Today, it offers fantastic views of the city and is a popular tourist destination in spring for the beautiful cherry blossoms. The castle grounds cover approximately 60,000 square meters (15 acres) and contain thirteen structures that have been designated as important cultural assets of Japan. 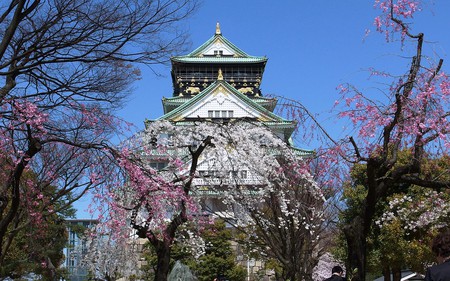 The History of Osaka Castle

Osaka Castle was originally completed in 1586 as a display of power and grandeur by the samurai warlord and ruler of Japan, Toyotomi Hideyoshi after accomplishing his goal of unifying Japan. The impressive castle took only three years to complete, thanks to the hard work of around 100,000 workers.

The castle became the center of the new unified Japan under Toyotomi rule and brought with it a short period of peace after centuries of civil war. The five-story main tower featured an exterior covered in gold leaf and ornaments, designed to impress visitors and demoralize enemies. It also featured eight giant fusetora (golden tiger) decorations and golden shachi (a mythical creature with the head of a tiger and the body of a carp) roof ornaments, believed to protect the castle against fire. 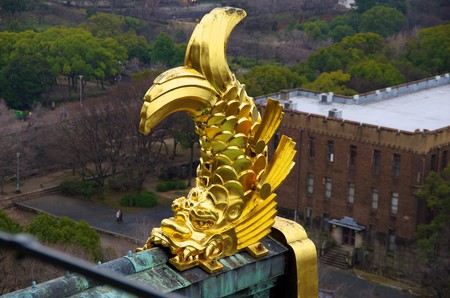 Over the years Toyotomi continued to expand the castle, making it more and more formidable to attackers. In 1597, Hideyoshi died, with Osaka Castle passed on to his young son, Toyotomi Hideyori.

In 1614, Osaka Castle was attacked by Tokugawa Ieyasu, victor of the greatest samurai battle in history at Sekigahara and ruler of Japan. The Toyotomi forces were overwhelmingly outnumbered by approximately two to one, but managed to fight off the 200,000 Tokugawa-led samurai army due to the strength of the castle and the cunning skill of one of its samurai generals, Yukimura Sanada. 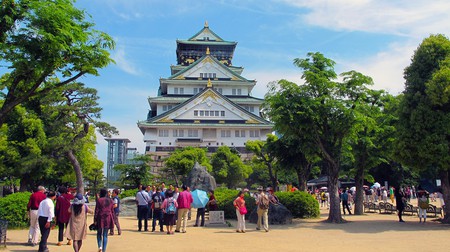 The original castle was unfortunately attacked again and finally destroyed by the forces of Tokugawa Ieyasu in 1615 during the second siege of Osaka Castle. This brought about the end of the powerful Toyotomi clan and led to the undisputed power of the Tokugawa Shogunate, which would rule Japan for the next 250 years.

The castle was rebuilt again in a slightly different spot by the new heir to the shogunate, Tokugawa Hidetada in 1620s, but the main castle tower was struck by lightning in 1665 and burnt down.

In 1868, the castle was razed to the ground rather than being surrendered to the anti-shogunate forces of the Meiji Restoration in 1868. 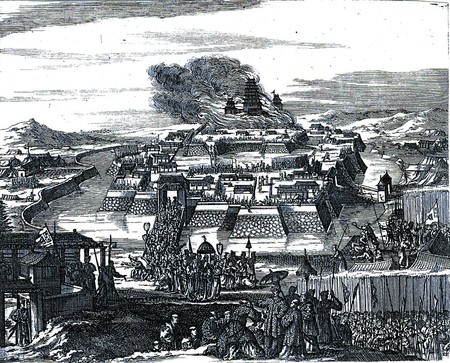 Early representation of the destruction of Osaka Castle | © WikiMedia Commons

The castle opens at 9:00 a.m. and is easy to reach from downtown Osaka. You can take either the JR Loop Line to JR Osakajokoen Station, or the Tanimachi Subway Line and Chuo Subway Line to Tanimachi 4-chome Station near the Otemon Gate approach to Osaka Castle. 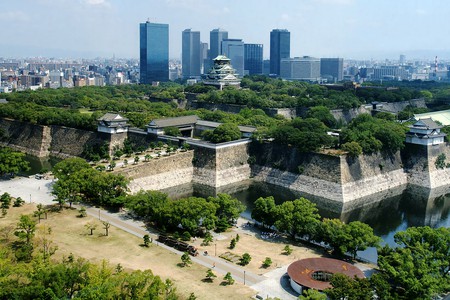 View of Osaka Castle | © WikiMedia Commons
Give us feedback