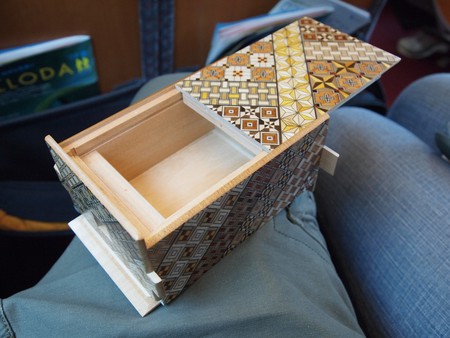 At first glance, the Japanese puzzle boxes, known as himitsu-bako, appear to be nothing more than decorative jewelry chests. In reality, though, these tricky boxes are so much more than that, hiding hidden treasures. Their history begins nearly two hundred years ago in Hakone, Japan. We find out more.

The first himitsu-bako were just small trinkets for holding odds and ends like a needle and thread. As they grew larger and more elaborate, they came to be known as sikake-bako, or tei-bako – trick box, or clever box. They were a popular souvenir for the tourists visiting Hakone’s famed hot springs. While Hakone was a destination in is own right, it was also a well-traveled travel route connecting Osaka and Tokyo, meaning the region saw its fair share of tourists throughout the nineteenth century. 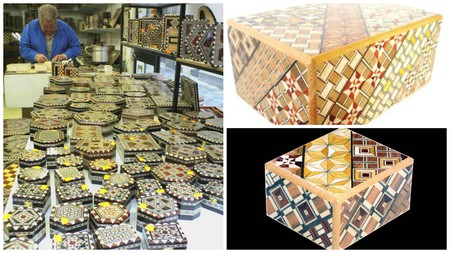 The concept of the puzzle box was recognized as having infinite uses beyond keeping children safe from needles. They began to be developed for use by workers to keep their tools safe, by samurai or warlords to send secret messages or for travelers to protect their belongings during journeys.

Himitsu-bako began to take on their current form sometime during the Meiji Period in the late 1800s. Three artisans, Takajiro Ohkawa, Tatsunosuke Okiyama and Mr. Kikukawa are credited with the creation of the modern puzzle box. They took the plain puzzle box and applied the yosegi-zaiku, a mosaic-style type of wood artistry which Hakone was famous for.

Japanese puzzle boxes can only be opened if one knows the correct sequence to unlock the compartment. Simple trick boxes can have as few as four moves, while more elaborate designs can require 60 or more moves. he owner slides the tiles around to solve the riddle of the himitsu-bako, not unlike a sliding block puzzle, but instead of rearranging a picture, it’s a seemingly random sequence of moves. And a true himitsu-bako will never reveal its contents unless this secret sequence, at first known only to the craftsman, is followed to the letter.