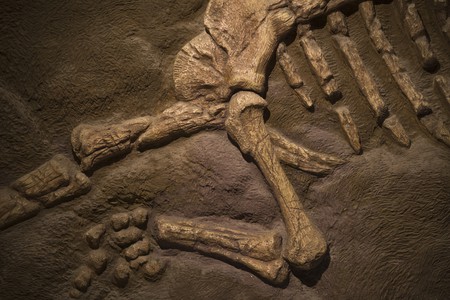 Last Thursday, Japanese researchers made an astonishing discovery in the mountains of Hokkaido: the complete fossilized skeleton of a Hadrosaurid, a dinosaur who walked the earth roughly 72 million years ago. At eight meters (26 ft) in length, it is now the largest dinosaur skeleton ever found in Japan.

Yoshitsugu Kobayashi, associate professor at the Hokkaido University Museum, stated “discovering the full-body skeleton of a plant eating dinosaur in the late Cretaceous period is the nation’s first of its kind”, calling it “absolutely the biggest-ever discovery in the history of Japanese dinosaur studies”.

The remains were unearthed from a geological layer roughly 72 million years old in the small town of Mukawa. Residents are hoping the discovery will help boost tourism and education in the area.

“The fossils are also valuable in global terms”, added Kobayashi. “We hope to discover what kind of dinosaur habitat existed along the coast”.

While a fossilized tailbone was discovered in 2003 by fossil collector Yoshiyuki Horita, it was not confirmed to be a dinosaur fossil until 2011. This led to a full-scale excavation conducted by Hokkaido University and the Hobetsu Museum which began in 2013. At present, over 1,000 fossils have been found.

The Hadrosaurid was a duck-billed herbivore believed to have lived near the coast. It is the second complete dinosaur skeleton discovered in Japan, the first being a 2.5 m (8 ft) carnivorous theropod found on the coast of Fukui prefecture in 2007.