A Two-Week Itinerary for First-Time Visitors to Japan 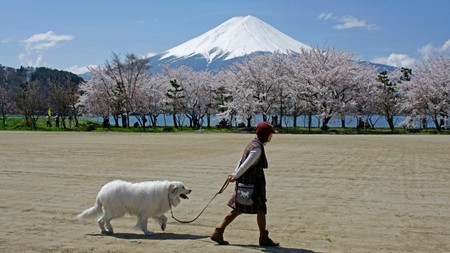 Mount Fuji is the highest mountain in Japan, and a must-see during your time here | © Hideo Kurihara / Alamy Stock Photo

It’s easier than ever to travel in Japan. Whether your interest lies in traditional culture, modern entertainment, or simply visiting a new country vastly different from your own, Japan has something for everyone. Here’s a two-week itinerary to get you started.

If you’re considering a trip to Japan, you can avoid the hassle of having to plan your every step and translate everything yourself by joining our epic 12-day adventure. Led by a local English-speaking guide, it guarantees a shortcut to all the must-see attractions – and that none of your precious time will be wasted.

Most likely you’ll be flying into Tokyo, the metropolitan capital city of Japan which has two international airports, Narita Airport and Haneda Airport. Of the two, Haneda is closer to central Tokyo, but there are a number of express trains and buses that go into the city proper from either. Once you’ve checked in to your accommodation, you’ll need some refreshment. Izakaya, the Japanese equivalent of a gastropub, are a good option for late night food and drinks.

Tokyo has a fairly endless list of attractions, but you can get a lot done in a day if you’re strategic about it. On day 2, start early at Tsukiji Fish Market which is bustling with activity long before the sun comes up. You’ll need to taxi over before the first train if you’re planning on catching the daily tuna auction, and the inner market’s most popular sushi restaurants will have lines forming from the time those first morning trains start running. If you’re not such an early bird, the outer market has plenty of sushi shops with less of a wait time.

Make your way over to the Asakusa district to experience the old-town vibe of Nakamise shopping street and Sensoji Temple, followed by a visit to Tokyo Skytree, the tallest observation tower in the city which opened in 2012. The blend of centuries-old tradition with the ultra-modern that you’ll find here perfectly captures the essence of Tokyo. End your afternoon with playtime and shopping in Tokyo’s anime and video game mecca of Akihabara, and stop by one of the district’s maid cafes for a true only-in-Japan experience. 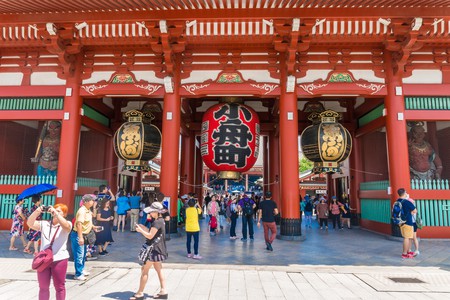 On day 3, check out the other side of town starting your morning in Harajuku. Take a stroll through the almost 100-year-old urban forest that make up the grounds of Meiji Jingu Shrine, then head over to Takeshita Street which is famous for its street fashion and numerous dessert crêpe stands. From there, travel one stop by train to Shibuya to check out the Hachiko dog statue– dedicated to the faithful shiba inu that inspired the film Hachi: A Dog’s Tale –and cross the massive Shibuya Scramble, the largest pedestrian crossing in the world.

Catch the bus or subway from Shibuya to the iconic Tokyo Tower, which before Skytree was the tallest structure in the city. Then head over to Shinjuku to experience the busiest train station in the world, along with towering skyscrapers, neon lights, and massive department stores and electronics shops. If you’re an anime fan, you’ll want to catch a westbound train from Shinjuku for a visit to the Ghibli Museum in Mitaka, a suburb of west Tokyo (be warned – you’ll need to reserve tickets a month in advance on their website). End the day with ramen or yakitori and a pub crawl in Shinjuku’s Golden Gai district, or down one of the alleyways of Shibuya’s nonbei yokocho (literal translation: ‘with karaoke’) into the wee hours of the morning if you’re so inclined. 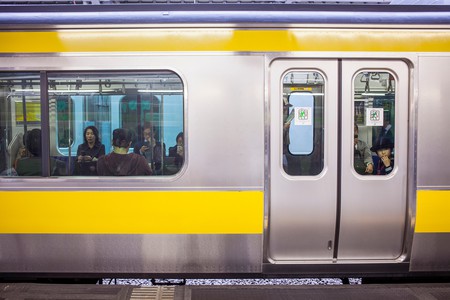 On day 4 head out to Hakone for some hot springs and nature. Peaceful forest walks, a pirate ship ride across a lake, and lucky black eggs boiled in a volcano spring await your pleasure. Spend the night in a traditional ryokan inn for some prime comfort and excellent Japanese food. 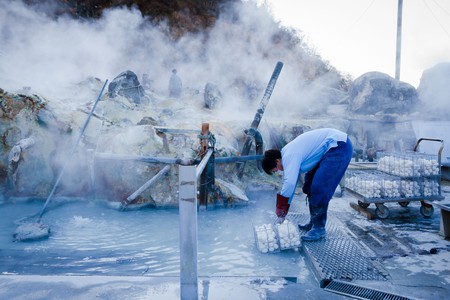 On day 5, catch the train to Nikko to visit the mausoleum of Shogun Tokugawa Ieyasu, one of the leading historical figures of the Edo period, and explore the must-see Unesco World Heritage Site of Nikko’s shrines and temples surrounded in gorgeous nature. There are plenty of walks and hikes in the area and a number of dramatic waterfalls.

On day 6, enjoy a stunning view of the world-famous Mt Fuji with a visit to Kawaguchiko Lake, which offers a picturesque image of the mountain reflected in the calm lake waters. Those eager to make the 3,776m (12,400ft) climb to the Mt. Fuji summit should plan their visit during the summer climbing season, which lasts from mid-July to the end of August. There are also buses that go up to the fifth station of the mountain for those who want to visit Mt Fuji without making the climb to the top. 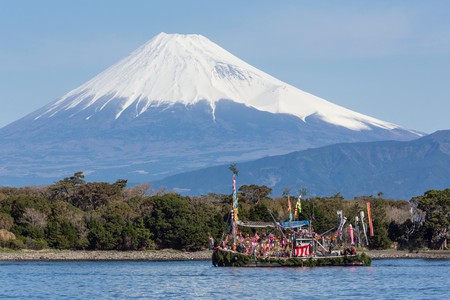 On day 7, catch the train to Nagoya in the Chubu (Central Japan) region. There, visit Nagoya Castle, one of the largest castles in Japan, catch up on some car history at the Toyota Automobile Museum, and eat some regional foods. Aichi is famous for its miso bean paste, which can be enjoyed in the local dish miso katsu, a fried pork cutlet served with a rich miso sauce. Those visiting Nagoya during the summertime should check out natsu basho, the annual Grand Sumo Summer Tournament held at the Aichi Prefectural Gymnasium.

While it could easily take a month or more to visit all 2,000 of Kyoto’s temples and shrines, the city’s leading attractions can be enjoyed in a couple of days. Kyoto is home to 17 Unesco World Heritage sites including Kiyomizudera temple, built on the slope of a mountain and the golden pavilion of Kinkakuji temple. Take a peaceful stroll through the towering bamboo grove at Arashiyama and along the nearby Katsura River.

Nara can be visited in half a day and is only a short distance from Kyoto by train. On day 9, make a quick stop by shinkansen train in the morning to feed rice crackers to the surprisingly greedy Nara deer and see the world’s largest bronze Buddha statue at Todai-ji temple.

Return to Kyoto after a morning of sightseeing in Nara to get a few more sites in. Don’t miss the historical arts entertainment district Gion, where you might spot one of Kyoto’s famous geisha called geiko and their maiko apprentices. And be sure to make time to walk the 10,000 torii gates of Fushimi Inari. 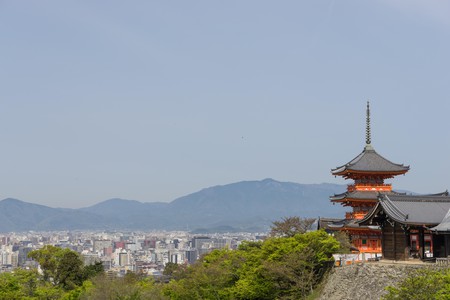 For days 10 and 11, get ready to eat because if any city can be called a city of foodies, it’s Osaka.

Osaka is a lively city, both day and night, with places such as the colorful entertainment district of Shinsekai, which has a carnival-like atmosphere with its strong Showa vibe and retro landmark Tsutenkaku Tower. Grab lunch at Janjan Yokocho Alley, the best place in the city to try kushikatsu, a dish of breaded and deep-fried skewered foods.

Head over to Nipponbashi to visit Den Den Town and its side street Otaku Road – the city’s answer to Akihabara – for video games, anime goods and maid cafés galore. Catch traditional culture at the Sumiyoshi Grand Shrine, one of the oldest Shinto shrines in Japan, built in the 3rd century before Buddhism was introduced to the country.

In the evening, check out Shinsaibashi, which comes alive with neon lights. Make the walk down the Dotonbori river canal and keep an eye out for the iconic neon sign of the Glico running man. The area is home to dozens of shops touting local street foods such as takoyaki (fried octopus balls) and okonomiyaki, a type of savoury fried pancake. 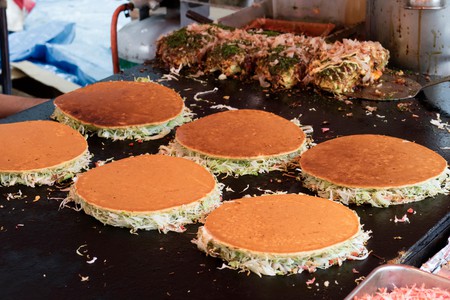 On day 11, venture out of the city centre to check out some attractions north of the town. The Instant Ramen Museum, located in nearby Ikeda City, takes visitors through the history of instant noodles and offers the opportunity to make your very own cup noodle. Nearby is Minoo Park, a nature preserve with a number of attractions, including a 3km (2mi) nature walk to a massive waterfall, the Minoo Insect Museum, and Japanese macaque monkeys. During the autumn, you’ll find the best fall colours in Osaka here as well as momiji tempura, a local treat of deep-fried battered maple leaves.

When you get back to the city, be sure to check out the Umeda district in the northern part of Osaka. It’s home to the largest underground shopping centre in the world, over which stands the spectacular Umeda Sky Building. Declared one of the top 20 buildings in the world for its unusual design, Umeda Sky Building is actually two 40-storey skyscrapers connected by a ‘floating’ observatory in the middle.

Both Himeji Castle and Kobe can be visited in a day en route to Hiroshima. Himeji Castle is famed as one of the most beautiful castles in Japan, with an elegant appearance that resembles a white heron taking flight.

Spend the morning exploring the castle grounds before heading to Kobe in the afternoon. Check out the earthquake memorial of the 1995 Great Hanshin Earthquake at Meriken Park, which includes a preserved area from the disaster zone, and enjoy a sake tasting at the sake breweries in the Nada District. And certainly not to be missed is a dinner of Japan’s top-tier domestic Kobe beef. Find a reasonably priced meal at Steakland Kobe, or splurge on a teppanyaki course at steakhouse Kobe Beef Steak Ishida. 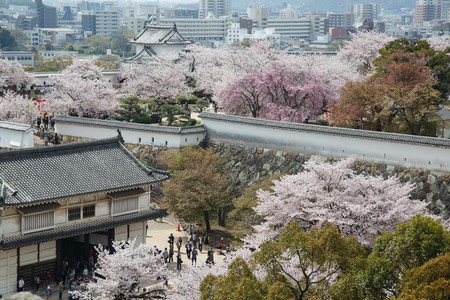 Start your day with a trip to the Hiroshima Peace Memorial Museum in the morning and a stroll around the Peace Memorial Park. Hiroshima Castle is also within walking distance. For lunch, there are a number of local eats to try: Hiroshima is known for its seafood from the Seto Inland Sea, especially oysters, but if seafood isn’t your thing there’s also Hiroshima-yaki (Hiroshima-style okonomiyaki). In the afternoon, take the train out to Miyajima and hop on the ferry to reach Itsukushima Shrine on the island there, home to the world’s only torii gate that floats in the sea. At low tide, you can even walk under the gate. For the evening, you have the option of spending a quiet night at one of the inns on Miyajima Island or catching the ferry back and returning to Hiroshima City.

Depending on if you’re flying out of Tokyo or Osaka, on the last day you’ll want to give yourself plenty of time to catch the shinkansen back to the city with room to spare before your flight. Spend the extra time picking up last-minute souvenirs and making sure that your bags fit the airline’s weight restrictions. Many people even end up having to buy an additional carry-on bag for all the extra things they’ve bought on their trip.