9 Places in Japan That Are Super Hard to Get to, But So Worth the Effort 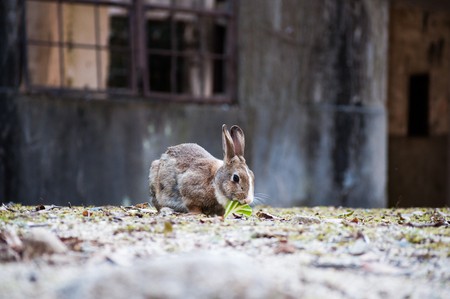 Japan is full of hidden gems, which is what makes it both such a fascinating and sometimes frustrating place to visit. No matter how many times you’ve traversed through the country or how long you’ve lived here, there’s no way you’ll feel like you’ve done it all, though that’s part of its charm. If you’re after inspiration for a new Japan adventure or some intrepid travel bragging rights, here are nine places you should add to the itinerary.

More difficult to get to because they’re still a very well-kept local holiday secret, the Tottori Sand Dunes are like Japan’s own mini-desert located in Tottori Prefecture. Sprawling across 30 square kilometers stretching from coast to the north of the city center, the dunes were created naturally by sand from the nearby Sendaigawa River. These days visitors can surf down the dunes on a sand board, take the chairlift to view the area from its peak or ride a local camel or horse-drawn cart across the mini mountain ranges.

Also known as ‘usagishima’, which is ‘rabbit island’ in Japanese, Okunoshima is the tiny island located off the shore near Tadanoumi, a small city in Hiroshima Prefecture. Reaching a very humble 4.3-meter circumference, the island is as you may have guessed, is inhabited by a large amount of adorable bunnies.

Today it’s estimated to be home to around 300 wild rabbits which are all descendants of a small group of domesticated rabbits that were left here around 40 years ago. Drawing swarms of visitors to the island, the bunnies are very friendly and very well fed, in fact you can buy rabbit food from the local visitor centre. The best way to get to Okunoshima is by ferry from either Tadanoumi city or a train from the nearby city of Omishima.

From the rabbit island to the dolphin island, also known as Mikurajima island. One of the seven northern islands of the Izu archipelago, Mikurajima is as hard to access it is naturally stunning. With a population of approximately 350, sprawled across the island’s 20 square kilometers, it’s the area’s underwater inhabitants that are most interesting.

Mikurajima is home to over 100 friendly and playful dolphins, as well as a surprisingly massive variety of tropical fish and turtles. You can only get here by airplane or by taking the eight-hour boat ride from Takeshiba Sanbashi bay in Tokyo.

One of Hokkaido’s hidden onsens, Shikaribetsukyo Onsen Shika-no-Yu is as hard to get to as it is to pronounce if you’re not in with the local knowledge. It’s a locally famous, natural open-air bath situated in the heart of the mountains located near Shikaoi, a small town in the northwestern part of Obihiro city.

The bath is most commonly used by campers who visit the Shikaribetsukyo Camping Ground during the more hospitable months of July to September. To use the bath is free, and to camp in the area is only 250 yen ($2 USD) per night. You’ve just got to figure out how to get there.

Because Okinawa Prefecture is an archipelago, it’s home to hundreds of secret, hard to find, hidden tropical gems. One of the area’s most stunning gems is Kudaka Island, a small island with a circumference of just 7.75 kilometers, located a 15-minute high-speed ferry ride from the main island of Okinawa. Legend has it that during the Ryukyu Kingdom reign (15th to 19th-century) the island was frequented by the Ryukyu kings. Rich with unique history, architecture and home to a very unique irabu (sea snake) soup, Kudaka is an adventure waiting to happen.

Nestled in the mountainous Hida regions of Gifu Prefecture sits Takayama city, an almost perfectly preserved old town of Japan. During the feudal ages the area was known for producing quality timber and some of the most highly-skilled carpenters in the nation. Thanks to the handiwork of the locals, many of the city’s more historical buildings are still standing. Though in recent years its untouched beauty has made it a little more open to tourists, it’s definitely worth the journey if you’re trying to experience what it would be like to travel back in time.

One of the spookiest places in Japan has to be Mount Osore, also colloquially known as ‘Fear Mountain’. Located in Shimokita Hanto, a peninsula hanging off the northern tip of Japan’s main island Honshu, Mount Osore is also considered one of Japan’s three most sacred places. Because the area is rich with volcanic activity, there’s a powerful odour of sulfur that permeates the air, and this combined with the grey barren ground and jagged coastlines is what aligns it with descriptions of Buddhist hell and paradise.

It’s also home to the river Sanzu no Kawa, which legend says has to be crossed by all dead souls on their journey to afterlife. The area lacks public transportation, but if you do make it, there is a temple that’s equipped with overnight lodgings for visitors. One last thing, if you do visit the mountain’s Lake Usori be wary of its poisonous water.

The furthest part of Tokyo is located around 360 km south of the city centre, and is actually a volcanic island in the Philippine Sea. Aogashima Island, technically administered by the Tokyo city government, stretches a small 8.75 square km. It’s home to a population of just 170 people making it the smallest village in Japan.

It’s so small that there’s only one postal address to the island and the post worker delivers the mail to the island’s citizens from memory only. Infamously hard to get to, the only way to visit Aogashima is to take a helicopter or ship from the neighbouring island of Hachijojima, which is 70km away.

Though there is a Toshima ward in the centre of Tokyo, this spot is a far cry from the bustling metropolis that is Japan’s capital city. One of the smallest inhabited islands in the Izu Island chain, Toshima is 4.12 square kilometers and home to approximately 330 citizens.

Over the years it’s garnered a reputation for being one of the country’s best producers of marine products, most notably the Japanese spiny lobster and giant-horned turban. To get there you have to take the almost three-hour jet ferry ride from Tokyo’s Takeshiba Terminal, but it’s worth the trip during nightfall as the island sky transforms into a natural planetarium.