The Most Jaw-Dropping World Heritage Sites In Japan

Japan has 20 locations listed as World Heritage Sites, along with additional ones that are up for consideration. You can check out the full list, but here’s our top selection to give you a taster of the cultural and natural heritage on view in Japan, ranging from primeval forests and unique ecosystems, to huge castles and Buddhist and Shinto temples and gardens. 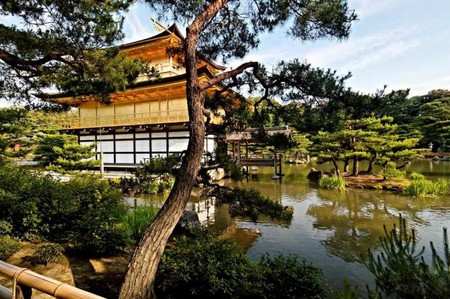 The Historic Monuments are spread across 17 locations in the cities of Kyoto, Uji and Otsu. They comprise Buddhist temples, Shinto shrines, 12 gardens and Nijo Castle. They date from the 8th century all the way up to the 17th, the period when Kyoto was the main cultural and political center in Japan. Kyoto was founded in 794 BC as a new Imperial capital during the period of Chinese influence and remained the capital of Japan until 1868 and the Meiji restoration when the court was moved to Tokyo. The buildings of Kyoto, thus, form an anthology of a thousand years of sacred architecture. Their survival is thanks in no small part to the passing of the Ancient Shrines and Temples Preservation Act in 1897. 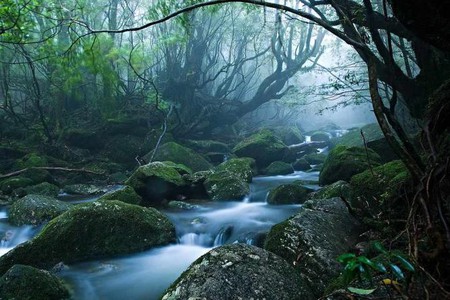 Yakushima is one of the Osumi Islands, 60 kilometers from the southern tip of Kyushu. It’s an island of mountains and dense forests, noted by UNESCO as a site of biological, scientific and aesthetic significance. There are forests that date back well over 1,000 years, and an ecosystem that supports more than 1,900 different species and subspecies, including ancient specimens of the Japanese cedar tree. The unique ecosystem that sustains the incredible biodiversity of Yakushima is caused by the location of the island at the borders of the Oriental and Palearctic biotic regions. This means there is unusually high levels of rainfall each year, up to 8,000 millimeters, along with very high humidity that gives the plant life its uniquely luminous green tint. 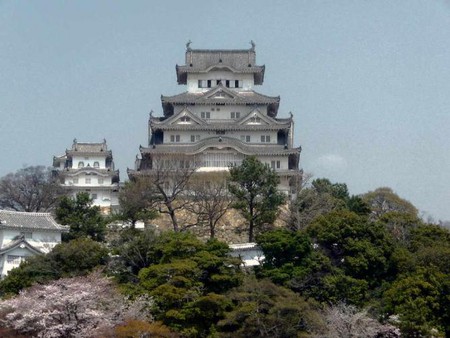 Himeji-jo in southern Honshu is the classic example of a Japanese castle, with its keep, moats and defenses still in place. It’s famed in Japan for its white, largely wooden construction and is known as the ‘Castle of the White Heron’ for its resemblance to the bird as it spreads its wings and takes to flight. There has been a fortress on the site of Himeji-jo since the 14th century, though what we see today is largely the result of a major rebuilding project between 1601 and 1608 at the start of the Edo Period. Himeji-jo is the largest castle in Japan and a symbol of the feudal period of the Shoguns who ruled until the restoration of the Meiji dynasty in 1868. 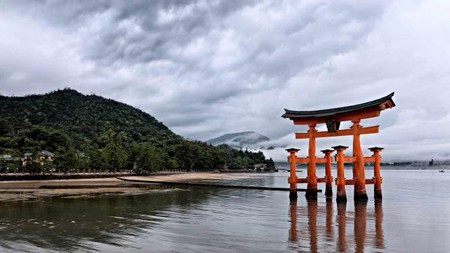 The island of Itsukushima is in the Seto Inland Sea. The Shinto Shrine on its coast is another iconic image of Japan, especially the torii gate that stands just out to sea, built from camphor wood that is impervious to rot. The shrine buildings are built on piers that give the impression of floating above the waters of the sea. Like many Shinto centers of worship, the shrine sits at the base of Mount Misen that dominates the island and is dedicated to the daughters of Susanoo-no-Mikoto, the god of the seas and the storms. The initial shrine on Itsukushima dates to the 6th century although the current complex has its roots in the buildings developed by the warlord Taira no Kiyamori in the 12th century.

Remote and largely untouched by the hand of man, the Shiretoko National Park is at the northern end of a peninsula that sits on the very northern tip of Hokkaido. It’s an area of intense natural beauty, another location with a unique ecosystem in which can be found endangered species of land and sea creatures. It’s also one of the most nutrient-rich areas of water in the world, fed by the sea ice from the Sea of Okhotsk just to the north. So there’s a lot of food for Japanese brown bears, sika deer, Japanese night herons and Blakiston’s fish owls, and rich flora such as the katsura tree and the Sakhalin fir. In Japanese, the name Shiretoko means ‘the place where the earth protrudes.’ 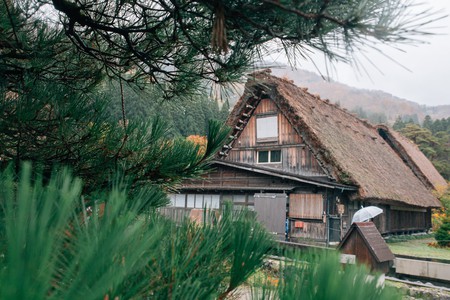 Historic Villages of Shirakawa-go and Gokayama

The Historic Villages lie in central Honshu, deep in the mountainous valley of the Shogawa River. There are three villages in all: Ogimachi in the Shirakawa-go region and Ainokura and Suganuma in Gokayama. The villages are rare in that traditional forms of agriculture, like the growing of rice, were impossible owing to the climate and terrain. Instead, the inhabitants relied upon industries such as sericulture and papermaking. They built their homes in the Gasso-Zukuri, or ‘prayer-hands’ style, with slanting thatched roofs, enabling them to withstand heavy snowfall and use the top floors of the houses for industry. Today, there are still 117 houses in this style still standing, rare examples of Japanese architecture that developed in response to natural, social, and economic pressures. 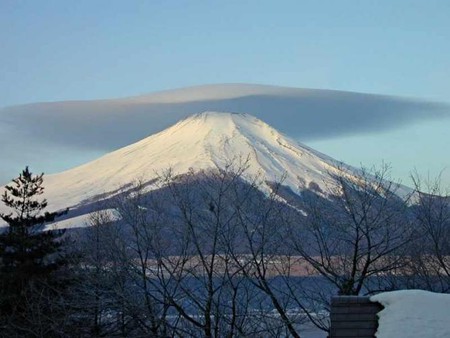 Fujisan, or Mount Fuji, is a sacred place and source of artistic inspiration, complete with shrines and pilgrim routes that line its slopes and sacred lakes at its base. Altogether there are 25 sites dotted around the great mountain, including Shinto shrines built into lava craters and lodging houses built for pilgrims. Mount Fuji has significance in both Buddhism and Shintoism and became a major pilgrim site in the 18th century, with the pilgrims following a circuit around the eight lakes that surround the mountain before ascending its slopes. Since the 14th century, the mountain has attracted artists, with the image of the summit becoming especially important in the woodblock prints that sparked the rise of Japonisme in the West in the 19th century, plus influenced artists including Whistler. 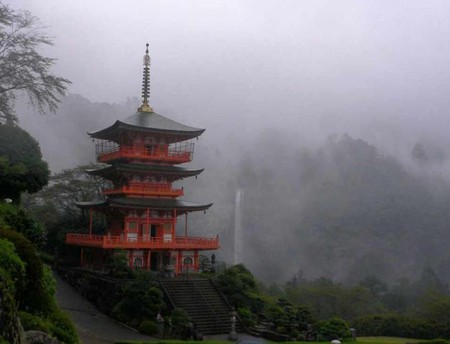 Sacred Sites and Pilgrimage Routes in the Kii Mountain Range

The Kii Mountains are on the southern coast of Honshu and look out over the Pacific. Spread over 500 hectares are the three scared sites of Koyasan, Kumano Sanzan, and Yoshino and Omine, with hundreds of kilometers of pilgrimage routes linking them to the ancient capital cities of Kyoto and Nara. The sacred sites are set in stunning landscapes, with temples, shrines, waterfalls, primeval forest and woodland. The shrines date back to at least the 9th century and became especially popular in the 11th and 12th centuries. The area is unique also for the fusion of Buddhism and Shinto cultures, with sacred sites devoted to both the traditional nature worship of Shintoism and Buddhism, which came from China in the mid-6th century. 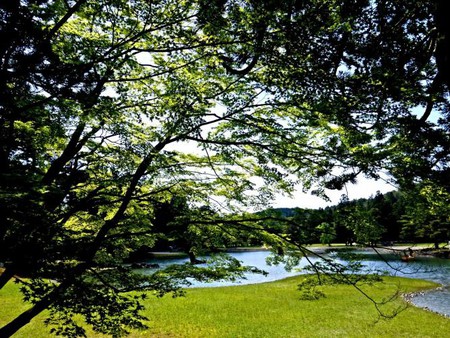 Hiraizumi is another site with a longer full title: Hiraizumi — Temples, Gardens and Archaeological Sites Representing the Buddhist Pure Land. Lying in northern Honshu, Hiraizumi was once a major administrative center and a rival to the power of Kyoto in the 11th and 12th centuries. The Oshu Fujiwara ruling clan were responsible for the development of a set of gardens made up of water, temples, and pagodas around Mount Kinkeisan. The World Heritage Site includes the four gardens, which were laid out to represent a vision of heaven on earth, the Pure Land of the Buddhist afterlife, a place of beauty beyond all others, along with remains of the administrative buildings of Hiraizumi. Despite a series of huge fires in the 13th century, many of the temples have been rebuilt over time.