9 Albums You Didn't Know Were Inspired by Japan 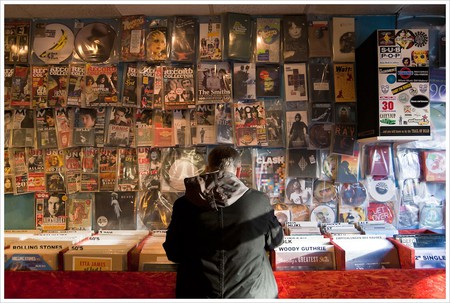 Creatively, it’s pretty clear how Japan proves a wealth of inspiration, especially for non-Japanese-born artists. As well as being incredibly diverse, there’s something a little subversive about the country, no matter whether it’s your first visit or your 100th. Here are 9 albums by non-Japanese musicians inspired by the land of the rising sun.

This is the third full-length record from French ambient electronic duo Air and arguably their best. In 2003 the duo lent the single ‘Alone in Kyoto’ to the soundtrack for the iconic cult film Lost in Translation, the story of two lost souls who find themselves in Tokyo, starring Bill Murray and Scarlett Johansson and written, directed and produced by Sofia Coppola. The instrumental track acts as an album closer on all the releases except the Japanese edition which features a bonus track titled ‘Easy Going Woman’.

The boundary-pushing Canadian electro hero Grimes is an unashamed fun of Japanese culture. Citing names like Yayoi Kusama, Geinoh Yamashirogumi, Kyary Pamyu Pamyu as creative inspirations, as well as the film Akira and videogame The Legend of Zelda as inspirations, she makes clear a sense of Japanese futurism throughout her work.

Her 2012 breakthrough album Visions, however is where the Japanese inspiration is most apparent. From the bold album artwork to the stand-out singles ‘Genesis’ and ‘Oblivion’, her work warps the kawaii and the weird into an undeniably unique new creation. Track eight on the album ‘Be a Body (侘寂)’ also references wabi-sabi ‘侘寂’ which is a philosophy based on the acceptance of imperfection and transience.

Like a fine wine, American indie rockers Weezer’s 1996 album Pinkerton has really only benefitted from age. A follow up to the band’s triple-platinum debut LP (known as the Blue album), Pinkerton was released within a cloud of high expectations from both friends and fans alike. Abrasive, lyrically dark and lo-fi, the album’s content was a far cry from the band’s smash 1994 single ‘Buddy Holly’ and as a result it crashed headfirst into a wall of criticism and disappointment.

In the past two decades following its release its importance has been acknowledged and it’s now considered to be the band’s finest effort. Named after the a character from Giacomo Puccini’s 1904 opera Madama Butterfly, the story of an American solider who falls in love with a geisha while in Japan, the LP is littered with Japanese references.

Japanese culture and American hip-hop doesn’t necessarily sound like a likely creative pairing. But thanks to the country’s fashion icons like Nigo, Yohji Yamamoto (the creator of Y3) and genre pushing producers like DJ Krush and Nujabes, it’s become a creative combination made in heaven. One of the biggest musical outputs from this pairing is Kanye West’s mega 2007 release Graduation.

Featuring the singles ‘Stronger’ and ‘Good Morning’, the album also boasts cover artwork designed by Japanese contemporary artist and cultural icon Takashi Murakami. Given that this LP’s artwork was the final in the College trilogy, Kanye only wanted the work to be done by a man he called ‘the Japanese Andy Warhol’. Longtime creative collaborators, Kanye and Murakami were recently spotted in Japan, sparking rumours of a new Japanese recorded LP.

From the futuristic ideologies of birthing a virtual band to the inclusion of a Japanese member, UK fictional animated band Gorillaz are no doubt influenced by Japanese culture. Created by animator Jamie Christopher Hewlett and musician Damon Albarn, the band has maintained an impressively successful career since their incarnation in 1998.

Noodle is the band’s Japanese member; she’s the lead guitarist and occasional main and backing vocalist. When visualising the member Hewlett was influenced by the work of Studio Ghibli, which he’s likened to being the less cheesy version of Disney. The fact that Ghibli films are both beautiful but also rather a bit dark, is something that motived him to create Gorillaz the way you see them today.

Canadian pop single Carly Rae Jepsen is a massive fan of Japan, in part because Japan is a massive fan of her. She loves the place so much that when her critically acclaimed 2015 effort E• MO• TION (Emotion) was gearing up for release, she decided to unleash it on Japan two months before anywhere else. Between her first introduction to the country and the release of this record she made 11 different visits to Japan, each time collecting more fans and soaking up more and more influence.

Aladdin Sane is the sixth record from British musical icon David Bowie. What is most iconic about this record is arguably its cover art, which has been parodied and replicated uncountable times over the past four decades. Many people don’t know however that the artwork has a very strong Japanese connection. In the 1970s Bowie was taught by Japanese actor Bando Tamasaburo how to apply traditional style ‘kabuki’ (Japanese theatre) makeup. By creating a stark, white base and layering and bold accents over it, this is how the Aladdin Sane face came to be.

This debut record by modern day pop icon Nicki Minaj made massive waves throughout the hip hop and pop scene upon its release in 2010. Featuring an impressive array of feature guests including Rihanna, Eminem, Drake and Kanye West, the most attention grabbing face in the Pink Friday family was probably Nicki’s alter ego type character ‘Harajuku Barbie’. Born from the admiration of the boldness of Tokyo’s Harajuku girls, this hyper colorful, almost manic fashion and style influence weaved its way through Nicki’s work on her following releases too.

This 2013 release was the first official album from much hyped Canadian R&B star The Weeknd following a trilogy of critically acclaimed mixtapes. For The Weeknd, Kiss Land was a symbolism of the bizarre world of life as a touring artist. After the success of his mixtape trilogy, life on road presented a number of challenges and life changing experiences for the singer and as a result he came out with an album heavily influenced, visually at least by Asian culture, more specifically Japanese iconography. When asked why he chose Japan as a visual inspiration, he cited the fact that it was the furthest he’d ever been from home and basically epitomised a different world.